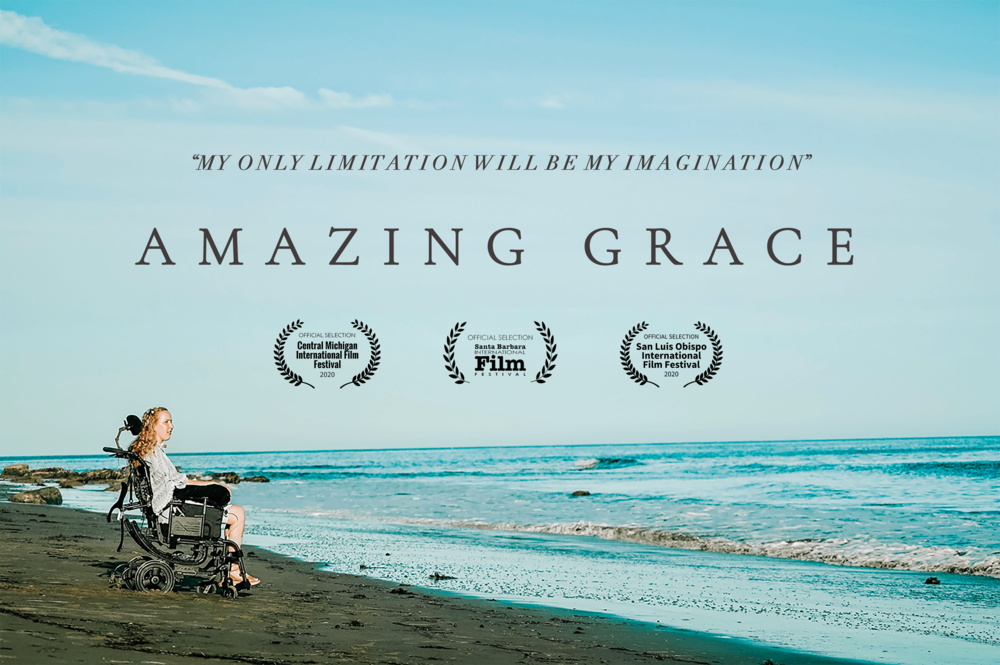 When Grace Fisher graduated Santa Barbara High School in 2015, it was nothing like she had thought it would be. Fisher was a third-generation SBHS student who loved music above all else. She was singing with Madrigals, working on her college applications, and trying to savor her final year at SBHS. But then on her 17th birthday, surrounded by friends and family, Fisher suddenly began to have intense pain in her spine. She didn’t think “anything serious was going to happen,” but over the course of the night, she lost the ability to walk and breathe on her own. Cottage Hospital was able to determine she was infected with Acute Flaccid Myelitis, an extremely rare polio-like illness, and she spent seven months at the Craig Rehabilitation Hospital in Denver. When she videocalled into her class’ graduation ceremony to give a speech, it was clear that her life had been permanently changed.

But that’s not the story that Lynne Montgomery tells in her impactful new documentary Amazing Grace. Instead of focusing on Fisher’s setbacks, the film highlights her successes since that fateful day. It certainly doesn’t shy away from portraying the difficulties of living with a disability, but Fisher and her family, through their individual strength and close-knit bonds, prove Fisher’s sentiment from that graduation: no matter the circumstances, one can always find a way to achieve their full potential. It is an important story for everyone, especially with the current state of the world, and Fisher’s optimism provides dazzling hope to even the most jaded viewer. Almost no one can leave this film with dry eyes, not because they feel bad for Fisher, but because few people are as inspiring in their passion and perseverance.

A musician practically from birth, Fisher played guitar, piano, and cello growing up and also sang and danced. After becoming paralyzed, she found new ways to reconnect with the world of music. At first, she learned to play piano with her mouth, and then she became inspired to compose. She studied Music Composition at UC Santa Barbara, where she learned how to express herself in new ways through accessible composition software. While music has taken on a more theoretical than physical form in her mind, it still serves the same purpose: authentic self-expression. In a world in which people with disabilities are often only seen for their disabilities, Fisher is proving in a radical way that she is a complex and passionate person. She is also a painter, and, in fact, she has been featured in international news coverage for her incredible ability to paint with her mouth.

Perhaps Grace Fisher’s largest impact in the community is through the Grace Fisher Foundation. When Fisher was approached by the Make-a-Wish foundation, an organization that assists kids with illnesses, she knew that she wanted to use that opportunity to give back somehow. Just before turning 18, with the support of the Santa Barbara Foundation, Fisher began her organization as a way to bring the joy of art to kids living with disabilities. After her own experiences doing art therapy and using music to heal in rehab, Fisher wanted to bring that back to her community in Santa Barbara. The foundation runs a range of programs including an all-inclusive drum circle and an adaptive dance series, all of which are aimed at empowering children with disabilities through artistic expression. Their most recent project is Park Pals, “a neuro-diverse group for kids who want to make friends, create art, move their bodies and sharpen social skills in nature.” They meet weekly in Oak Park with sessions facilitated by therapy professionals. More information about the foundation can be found at GraceFisherFoundation.org

In 2020, Grace Fisher continued her tradition of the annual Winter Concert where Santa Barbara musicians perform to spread holiday cheer and support the foundation. Although the COVID-19 pandemic greatly complicated their plans, Fisher insisted that the show go on. With many safety precautions taken to prevent the spread of the virus and support from the community, they were able to create their first fully live streamed concert from the Granada Theatre. Local American Idol celebrity Jackson Gillies performed alongside many others, including current SBHS senior Bridget DeVine and a choir made up of alumni of the SBHS Madrigals. Fisher also worked with the kids from the foundation to create the animated film “A Critter Fable” about a caterpillar who learns that “ground insects are happy on the ground. Just because they don’t have wings, that doesn’t mean they can’t have a happy life too.”

The first Winter Concert, three years ago, began as a surprise for Fisher from her mother, but as soon as Fisher caught wind of it, she knew that she had to write a piece for the performance. Fisher said her mentality was very much “I want to prove that I can do it.” In typical Grace Fisher fashion, she has now set a goal for herself to write an original piece for each concert. With many performers from throughout Fisher’s life and around Santa Barbara’s artistic community, Santa Barbara High School’s theatre was filled with the euphony of Santa Barbara Strings, the Santa Barbara Youth Music Academy, the Santa Barbara Youth Symphony, and many more musicians. Fisher’s original composition, “Waltz of the Waves,” was a particularly touching moment, and Fisher remembers how special it was to hear her work brought to life for the first time. The organizations that helped create this event have consistently supported Fishers’ efforts, and she said it was really special to see “how our community was able to rally behind us.”

With such an incredible story, it’s clear that Fisher deserved to have someone very capable help her to tell it. Amazing Grace is intimate and stunningly personal. Rather than coating over the edges, the director Lynn Montgomery has portrayed the life of someone with a disability in an authentic way, the kind that is often missed in the big-budget dramatic Hollywood representations. Amazing Grace interpolates footage from Fisher’s childhood with more recent moments, ranging from her  playing music with La La Land composer Justin Hurwitz to her video calling with kids who have the same condition as her. While the film often shows Fisher and her family at their most vulnerable moments, Fisher said that at no point in the filmmaking process did it ever feel invasive. More often than not, she said, those types of shots would just be Montgomery, who is a friend of the Fisher family, pulling out her iPhone to document a moment that felt important to Fisher’s story.

With its premiere at the Santa Barbara International Film Festival in 2020, Amazing Grace immediately touched the hearts of many community members. The producers had planned a multi-festival run for the film, but those plans had to be put on hold due to the pandemic. Now, with the world reopening, the film has been able to reach a larger audience and gain international acclaim. Screenings are still held on a limited basis because the movie is on the festival circuit, but the producers are working on plans for a wider release. Indeed, Fisher hopes that as many people as possible are able to see the movie and that it will help them understand that disability does not diminish anyone’s value or potential. In particular, she wants people with disabilities to know “that even if your life dramatically changes, it’s not the end of everything. There’s still hope to do what you want with your life.”

What shines through above everything else in Amazing Grace is the joy in Fisher’s eyes when she is doing what she loves. Whether it’s her as a teenager strumming her guitar on her bed or her now writing music for an orchestra with the help of a mouth-controlled device, there is a clear moment where she ascends and leaves everything else behind except for the music. Grace Fisher is now off to study at the Berklee College of Music in Boston to continue pursuing her passion, but she takes the Santa Barbara High School spirit for creativity, self-expression, and persistence with her. Part of Fisher’s mission in life is clearly to show that people with disabilities are able to live their life in the way that they want, but it is a lesson that she is continuously learning as well, from people with disabilities on social media who she sees “do what they want with their lives, get married, have kids,” and from the children she works with. Grace’s journey has not been as simple as she may have hoped, but she has proven that with a strong community, an irrepressible spirit, and a lot of music, nothing can stop her from being “amazing.”