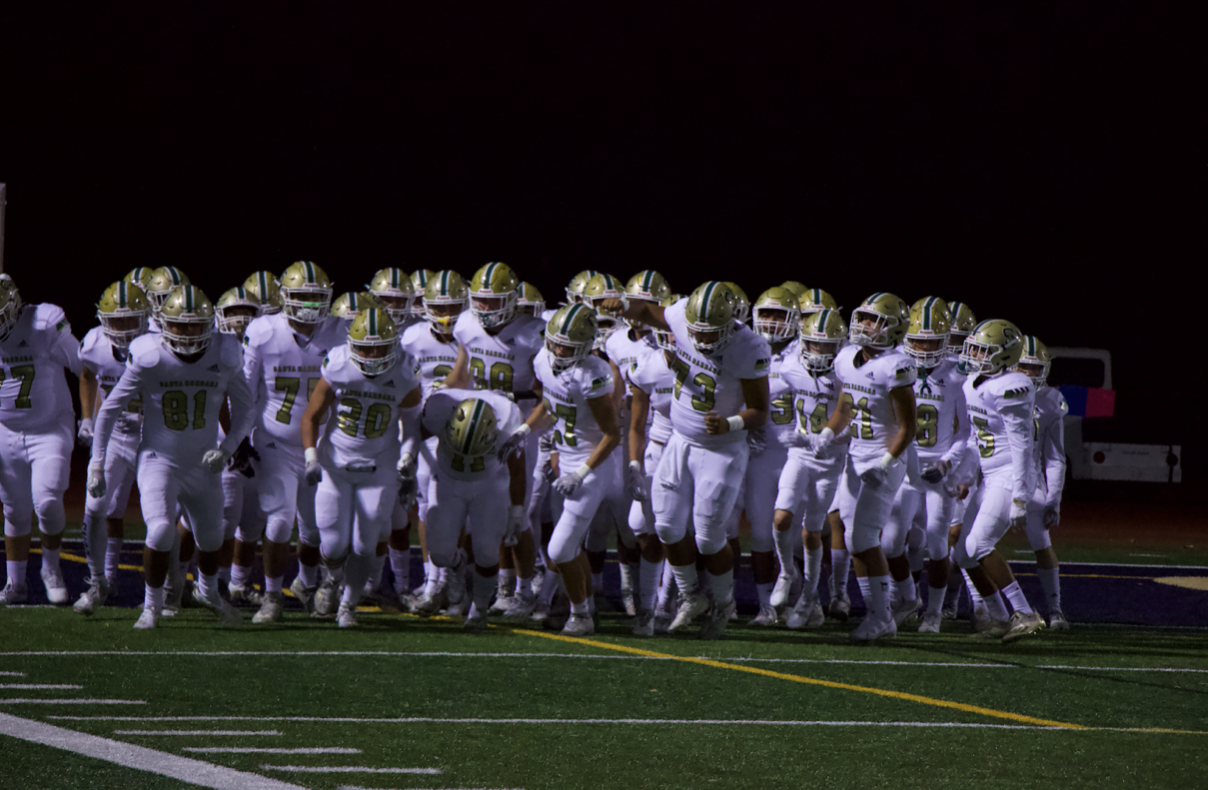 The Dons’ football program, like all sports programs, have gone through their ups and downs this season, but have shown tremendous growth. Although the Dons knew that this season would be difficult, they have learned to adapt and triumph despite lots of hardships in their way. Santa Barbara had gone 4-1 so far in the season before their homecoming game, which was going to be a struggle, knowing that they were going to be playing Pacifica, a well-known football-loving school. The Dons trained for games like these, though, and we’re ready to give it their all.

Coming into the game against the Tritons, one spectator noted, “The game felt just as the San Marcos game did, which I did not expect, but I’m not complaining!” The student section was fired up as everyone was there to enjoy the game, but also see who the royalty would be for homecoming court. Joel Flores, Emma Zuffelato, and Remy Rosales all were selected as homecoming royalty at halftime.

The game couldn’t have been better, as it was one of the Dons’ most competitive ones yet. It went back and forth, with Pacifica keeping control of most of the game, but the Dons would not back down. They continued to push and fight and never let the lead for the Tritons get above one possession. It ended up going down to the final drive of the fourth quarter for the Dons, and they were unfortunately stopped, and the Tritons were able to run the clock out and win the game. Santa Barbara’s 5-game losing streak was snapped as the refs blew the final whistle and the Dons came out defeated. They couldn’t hold their heads too low, as it was one of the most exciting games of the year, and the energy was there. They would have to show up and bring the same energy if they wanted to be Oxnard the following week as it would be Senior Night for the Dons, so they needed to play hard and show Channel League that Santa Barbara was not to be messed with.

Their next game was against Oxnard high school, a team that played similar to their last opponents, Pacifica, so the Dons were ready. It was another home game and although the Dons didn’t have the same energy in the stands that they usually do, the Dons energy on the field was there, and they battled hard against Oxnard. The game went back and forth, but the Dons were able to pull ahead and beat Oxnard 27-21, increasing their overall record to 6-2.

I talked to a few seniors about what it was like playing this year and the emotions they are going through as their season is coming to an end. One said “Honestly, I am just grateful to be playing right now, last season, lots of seniors didn’t get the privilege this year’s seniors are getting, so I am just making the most of what I have right now, and am honored to wear this jersey with pride,” This year’s seniors have dealt with lots of hardships throughout their four years of high school from not having a stadium to not being able to play completely due to COVID. Because they have a chance of going to the playoffs and winning a championship, they are ecstatic. The Dons’ football program is, even with losses and failures, a source of growth and improvement, and the Dons have surely shown lots of improvement over the season. The SBHS football team has shown those who doubted them that they are not a team to be underestimated, and are ready for anything that comes their way.