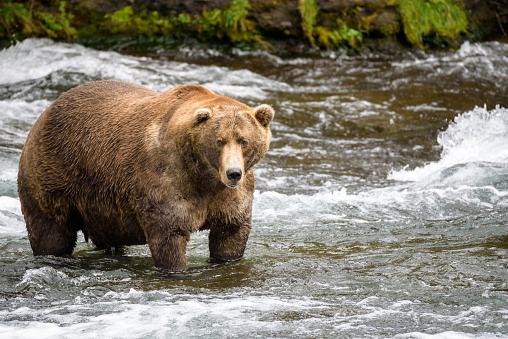 Fat Bear Week originally started way back in 2014 as Fat Bear Tuesday, a single-day competition created to show off the bears’ pre-hibernation weight gain, and bring publicity to the park. Since then, it has expanded into  a week-long social media sensation, with fans all over the world. Throughout the week, they cheer on their favorite bear, creating campaign posters and debating over who deserves the title of “Fattest of the Fat.”  Many watch the bears wage their own competition for salmon through the Brooks Falls Bear Cam.

With four rounds and twelve bears total, the competition was fierce, and only the best bear could win. (Author’s Note: It is our opinion that all the bears are the best boys and girls and all deserve to win.) The event started with mostly unknown bears, with a few celebrities such as Holly, Walker, and of course, Otis. Over time, the clash thinned out, as more and more bears were deemed unworthy of the fat bear title. Ultimately, clear frontrunners emerged: young upstart Bear 812, determined challenger Walker, and grizzled veteran Otis. Unfortunately for Bear 812, they were pitted against Otis in the semifinals, and lost by a margin of 26,130 votes.

Overall, more than two-hundred thousand people voted for the winner alone. The total number of participants is impossible to determine, but there can be no doubt that Fat Bear Week is a social media sensation. With it’s combination of cute animals and cordial competition, Fat Bear Week will continue to benefit Katmai National Park, and be enjoyed for many years to come.