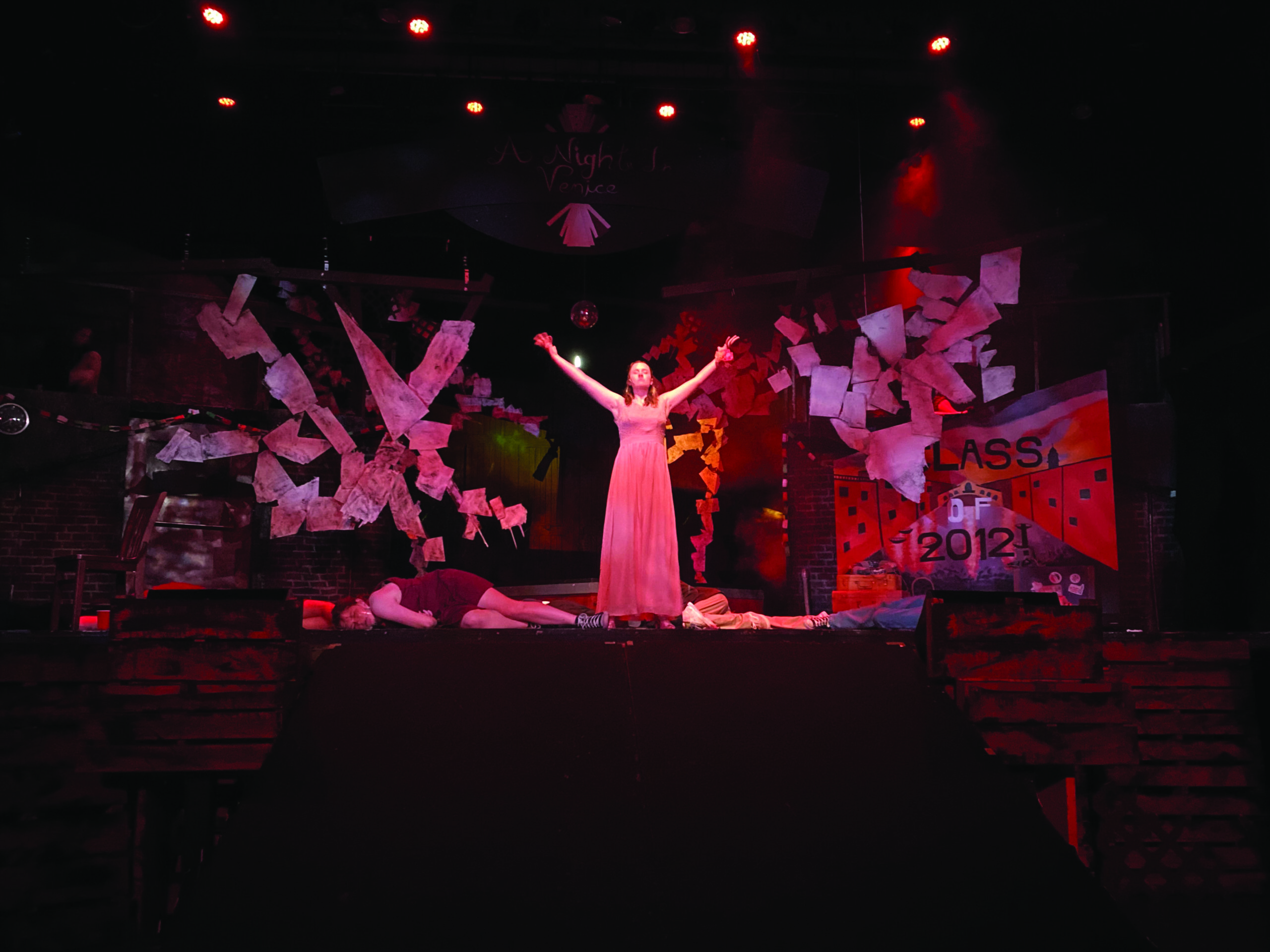 Returning for its first musical since the start of the pandemic, the SBHS Theatre Department is putting on the Stephen King-based show Carrie the Musical. This is their second production with new Theatre Arts instructor Justin Baldridge after the departure of Otto Layman, his predecessor. Layman certainly left a legacy at the school, helping build up the Theater Department and raising a tight-knit community of artists around it. With it being two years since Layman’s last show, The Countess of Pembroke’s Arcadia inspired Go-Go’s jukebox musical, Head Over Heels, took stage, Baldridge is hoping to pull audience members back into Santa Barbara High School’s historic seats.

Carrie is a horror-filled show that takes place at a high school in the town of Chamberlain, Maine. The story explores Susan Snell’s repeated flashbacks of the “alleged” events that took place there. The audience meets Carrie White, an outcast telekinetic seventeen-year-old girl who is relentlessly bullied at school by everyone, including Sue. Her suffering does not end at school as her religious fanatical mother abuses and shames her after Carrie has her first period. The story aims to accurately portray the struggles of teenagehood for Carrie and all of the other teens in the show as well, as each of them are shown to be struggling in their own way. Their emotional trials include feeling misunderstood, wanting desperately to fit in, and grappling with the consequences of their actions.

“I think it’s a good showcase of the type of show that I like to do, that I would take a dramatic musical over a comedy musical any day of the week. So I think for me, being my first big musical here, that is important,” Baldridge said about the show. In addition, the lyricist for Carrie, Dean Pitchford, who came to meet the actors to talk about his experience writing the show, explained, “I think many people identify with Carrie because she’s a misfit, and a lot of us have – at one time or another – felt like outsiders. But the true genius of Stephen King’s novel is that practically all the characters are misfits. They’re all wounded in different ways and grappling with their own personal struggles. And we can never really know – can we? – just what kind of turmoil anybody else is going through. One of the show’s lyrics asks, ‘What does it cost to be kind?,’ so I’d say that that’s the message: above all, choose kindness.”

Last year, for Baldridge’s first show at SBHS, the department put on The Iliad, the Odyssey, and All of Greek Mythology in 99 Minutes or Less, which was a small-cast comedy that’s production was made difficult due to the pandemic and budget restrictions. The year before, after Head Over Heels, the Theatre Department was getting ready for what would have been Layman’s last production, The Hunchback of Notre Dame. Layman had wanted to go out with a bang with this spring show, and had a large bombastic production in the making, however it was canceled because of Covid-19, and the Theatre Department was plunged into debt. This meant the Greek show had to be produced on a shoestring. In addition to this, the cast could only be a tiny eight person troop because the school would not allow a larger cast during the continuing pandemic. The show ended up having to be livestreamed as the restrictions at the time did not allow for a larger cast or for an audience to be in the building.

This year, with lower rates of the virus and higher rates of vaccinations leading to many restrictions being lifted and a full return to school, many of the issues that the Theatre Department had faced last year are much smaller concerns. The cast size was doubled from the last show of eight to sixteen cast members, and now there will be a live audience in the building which the cast is looking forward to. Junior Hattie Ugoretz, who is playing Sue and also performed in last year’s show, said “I am very excited to perform in front of a live audience again. It was really challenging to go almost a year without doing so, and nothing compares to getting to be on stage in front of a bunch of people just feeding off their energy.”

The ticket sales of The Iliad, the Odyssey, and All of Greek Mythology in 99 Minutes or Less, the help of the SBHS Theatre Foundation, and a sizable allocation of funds from the school administration allowed the Theatre Department to afford the rights to perform Carrie as well as the costs of producing it, as musicals are often much more expensive to produce than plays. While a lack of funds was fortunately a smaller issue this season, Mr Baldridge is still counting on Carrie to sell enough tickets for the next season’s production, Chicago. Money will still potentially be a problem that is on the horizon as the department will have to depend on any leftover funds from Carrie as well as its ticket sales for its budget for the spring show.

Another trial for the cast was the large influx of new members in the program. The small cast last year hadn’t allowed the introduction of many new members, and with the graduation of many of the theater veterans, many more of the cast members this year are performing in their first production at SBHS. This meant that many of the new members had to take more time to acclimate to the environment, and there were less upperclassmen to show them how things work. Carrie is also a very dark and dramatic show, which is definitely testing the chops of the old and new actors working on it, many of whom haven’t performed in a show in a year or two.

Despite the challenges the cast has had to overcome, Carrie has been a major success for the program. “I think it’s one of those shows where it provides a nice platform of a show style that I think that high schoolers would be intrigued to go see,” Baldridge said. “One of my missions here is to really engage with the students on campus and get more students in the seats.” Senior Emerson Steady said, “This is a show that explores the real struggles that many teens are dealing with in a beautiful and epic way. Especially after the pandemic, Carrie is a chance to reflect on our own actions and how we impact the people around us. I hope students come to see it because it’s both an exciting production and a relevant story.” The cast is very excited to bring Carrie to SBHS. There have already been two performances, but the show will be staged three more times this weekend. Come see Carrie on the 12th, and 13th at 7:00 pm, and the 14th at 2:00 pm. Tickets can be purchased at SBHSTheatre.com, the student web store, or the business office, as well as at the door. All audience members must provide proof of vaccination or a negative COVID-19 test from less than 72 hours before the production. Don’t miss it! For Carrie, her classmates, and the audience alike, it will surely be a night to never forget.