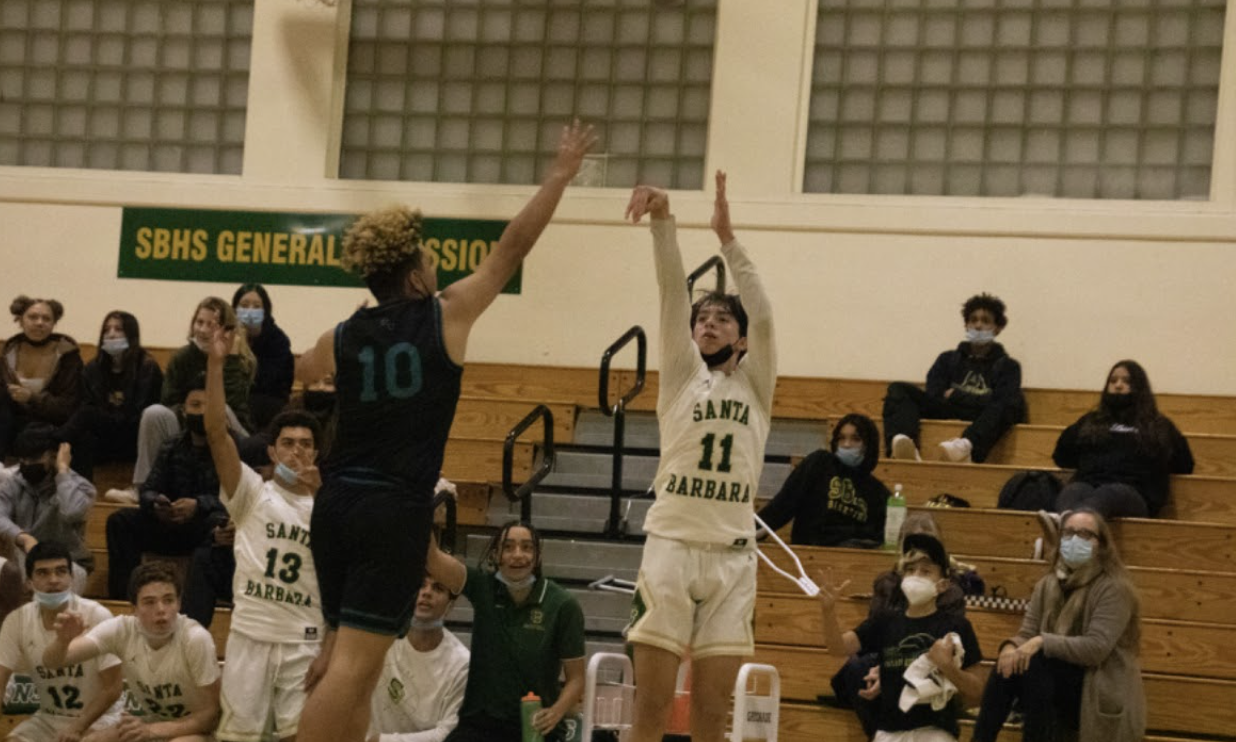 Santa Barbara Brings the Energy as a New Season Starts

It doesn’t feel like it has been that long since the last time the Dons stepped foot on the court, and that is because it hasn’t been that long. Due to COVID pushing all sports seasons back last school year, the Santa Barbara Dons basketball varsity team only had three weeks of break before they were back in the gym and training for the season. The preseason for the Dons have been very strong and successful, and it really helped them prepare for the actual season. When the actual season came around, the Dons were ready to play! It was also a plus that games would now be held in full capacity, and the Dons would have a full season, unlike last season. Although the Dons were eager to play a home game in front of a packed crowd, they would have to wait a whole month before they were given the opportunity.

The Dons first game would be against Buena, a tough opponent that the Dons have faced many times before. The game went back and forth, and it came down to the final play but the Bulldogs came out on top over the Dons after a controversial call by the refs. The Dons lost 52-51 in their first game. It was many players’ first game, so nerves were very high. The overall game was not the best start to the season, but it definitely wasn’t a bad start. They would be able to pick it up in their next game against St. Bonaventure. Against St. Bonaventure, the Dons came out with a new intensity. They wanted revenge from their last game and showed it on the court. They battled hard against a tough opponent and completed an 11 point comeback in the third quarter and ended up on top 52-41 for the first win of their season. It was a good win for the Dons and a huge moral booster after their last game.

Even though the Dons were on cloud nine due to their first win, their next game did not look in their favor. They were going to play a top 20 team in California as they were set to play Santa Margarita. The game was over before it started and the DOns lost by 29, which wasn’t a surprise as the team they played was one of the best teams they will play this year. They caught hard though and put up a battle when nobody thought they would, making the game closer than it should’ve been. Next, the Dons faced Ventura. It would not be an easy game for the Dons as Ventura is always a tough opponent. Like Buena, the game went back and forth the whole time. The fans for Ventura were super rowdy, but the Dons blocked out the noise and got the win as they went on a big run in the fourth quarter, winning 54-50 over the cougar.

Finally the Dons were able to play a home game as the following game would be against Pioneer Valley at SBHS. Tons of students packed the student section as by halftime, every seat seemed to be filled. It was the loudest it had been in the gym in almost a year. And the DOns showed up for that game, as they gave the crowd a game and went off in the second half, rubbing off the energy of the crowd. The Dons won their first home game 53-48, and improved their overall record to 3-2. Their next game would be a tournament in Corona Del Mar, where they would face very good competition.

The Dons spent the summer training for the real season, and they would have to practice a lot, as there would only be four returning varsity players coming back this season. Last year, the Dons were very senior heavy, so they would have to adapt and train the incoming underclassmen who were very new to the program, and had never played a single game of varsity basketball ever. I asked one player how it felt to play varsity at such a young age and he said, “It is a little scary, knowing that the kids I will be playing against someone who could be as much as 4 years older than me, but I am excited to know that I will play the best competition I ever had. I will learn a lot from this season.” The younger kids will have a lot to learn from the experienced seniors, but that does not mean this team will not succeed. The Dons program thrives on growing from mistakes and learning from them, so this season will be filled with lots of growing moments.

The coaches are also prepared this season and when I asked one how confident he felt when leading a young team he said, “We have very good young players, and if our seniors can lead the underclassmen to be their best and show them the ropes, we will be in very good shape. I am very excited to see how this season will go.” The coaching staff will stay the same as last year, so not much game plan will be changed from last season. With lots of new players though, it will take some getting used to. Led by Corey Adam, the Dons game plan is to outhustle and outsmart their opponents, the mindset Adam has kept throughout his many years of coaching.

This season, even though the Dons may not be very experienced, they will definitely have heart, which has been shown so far this year. The Dons have faced and will face many tough opponents in order to prepare them for League games, and hopefully CIF games later in the season. The Dons are working hard and be sure to check out their home game this season, as there is no more limiting seating like it was last year!