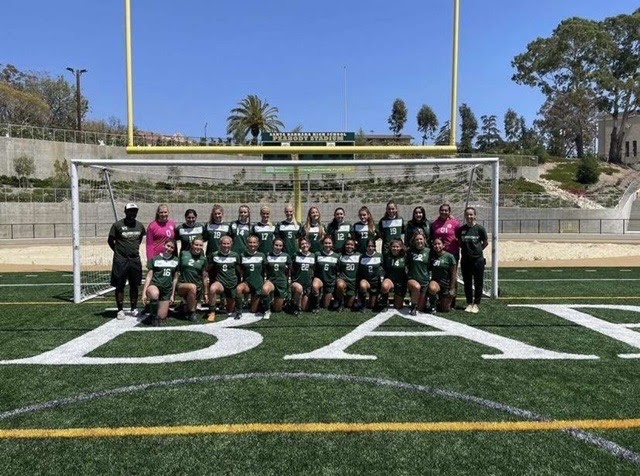 The girls soccer team is off to a slow start with two goals in three games. They tied their first game to a good Chaminade team that is always a well-rounded team in all sports. They came back home to lose 1-0 against Newbury Park. They then beat a physical Ventura squad 2-0 at home. Whitney Meister, starting center forward, said “The Ventura game was very chippy but we ended up pulling out the win in the end.”

They had a rough time trying to score against Chaminade. Meister, a sophomore, said, “ I played all 90 minutes and we played very well as a team. Final Score was 0-0 and Chaminade was a very good team as well. I took the next day off since I played all 90 minutes and got in the ice bath for recovery.” The Santa Barbara High School defense held strong led by their goalie Carolina Koceman who was coming out of a CIF championship volleyball season.

I had the opportunity to speak to the star during her off time about their season. She said, “Soccer has been really fun so far. Transferring over from volleyball to soccer has been kinda hard for me because I was kinda out of shape. The first week of getting back to soccer I got a concussion and have been getting back into things slowly.” Recovering from a concussion and being an athlete as well as a student is a big responsibility. “I think that being a student athlete is pretty draining but I am doing pretty good at managing my time and a decent job of managing my relationships and responsibilities outside of school and soccer. If I wasn’t playing soccer or volleyball I would definitely be surfing, which is my favorite hobby.”

There are many leaders on the team and they plan on having a great season. “Some teammates I look up to are Kasia Wolfe and Athena Bow Graham. They are really good and are super devoted to the team. They push us everyday and are great leaders and role models,” said Meister. They will be a hard team to beat when they hit their stride into the league with great leaders and good coaching by Willie Sims. They plan on beating all their rivals the 1-1 San Marcos Royals.

Preparation for the season has been a big deal as the Dons have been getting in the best shape of their lives in hopes for a great season. “I’ve been playing soccer since I was 3 so I’ve been playing for 12 years. I took a 2 year break to play volleyball but I then got back into soccer. I missed it a lot. When trying out for soccer, I was pretty rusty but super happy to play with my friends on varsity. Glad I am getting such a great experience” said Meister. The pre-season preparation is often necessary to get the team ready for what is to come.