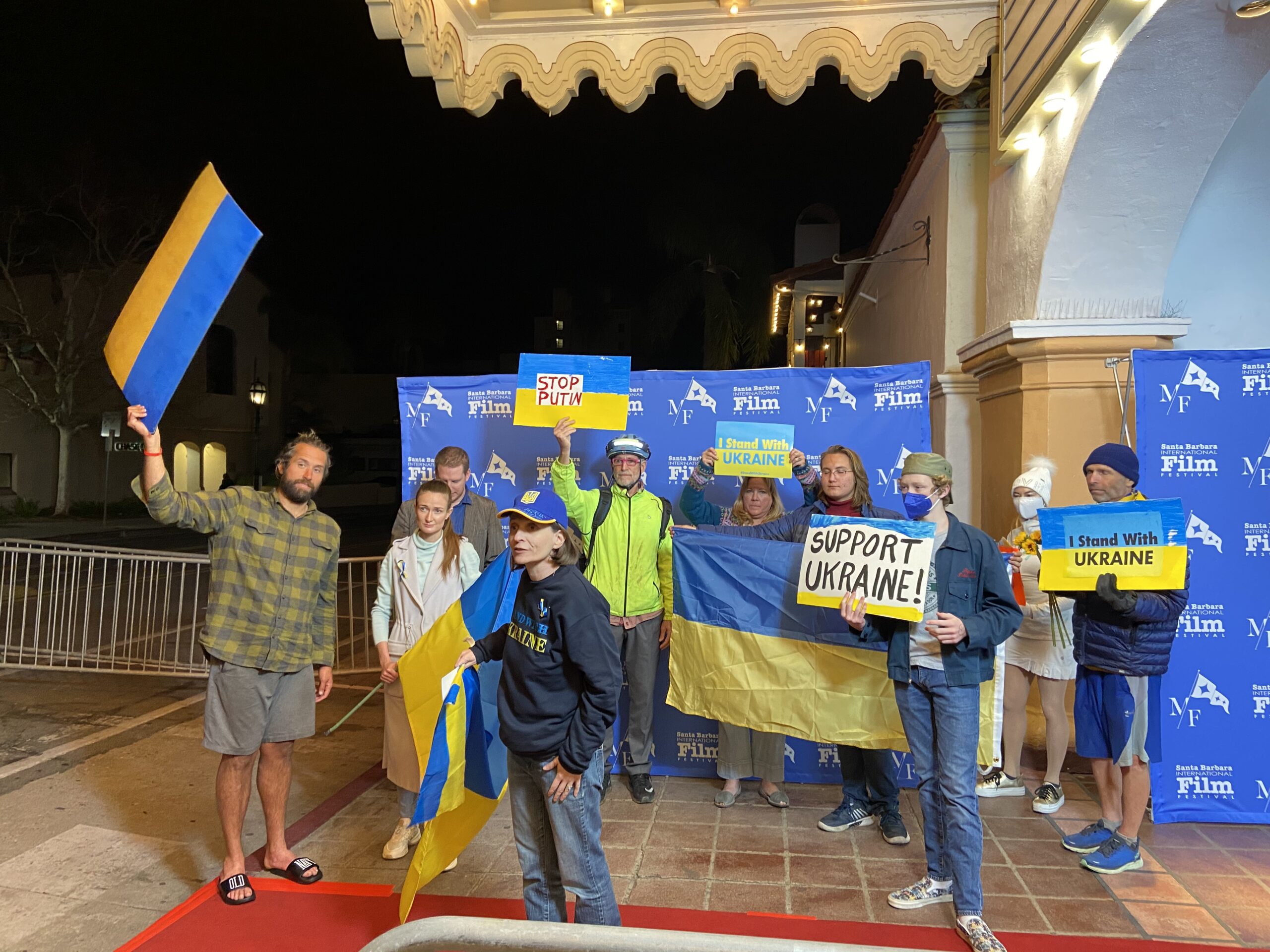 The Surreal Worlds of Ukrainians in Santa Barbara

For many people in Santa Barbara, war can be difficult to imagine. The United States tends to fight its wars from afar and no event since the 9/11 terrorist attacks have shown Americans at home the total devastation of armed conflict first-hand. But Russia’s invasion of Ukraine over the past month has begun to alter the perception of war among people living in the United States. The bustling streets of Kyiv, a metropolis of Eastern Europe, are familiar to anyone who has visited a large American city. And the bombed-out television towers, apartment buildings, and theatres provide a devastating vision of what our own streets could look like after a war.

For certain people in Santa Barbara, the deadly siege of Ukrainian cities and destruction of Ukrainian culture hit even closer to home. Immigrants to Santa Barbara from Ukraine have found themselves caught between two worlds. News from their homeland fills their phones, and desperate calls from family members and friends taking shelter or fleeing the violence punctuate their days. Meanwhile, life in Santa Barbara goes on around them. For Oksana Yakushko, this means her work as a psychology professor at Pacifica Graduate Institute. For Dasha Lobko, this means continuing her studies as an undergraduate at UCSB.

While Santa Barbara organizations like Direct Relief and Shelterbox help refugees as they cross the border into Poland, for many Californians, the largest impact of the war on their lives is rising gas prices as economic sanctions cut off Russian exports. So for these Ukrainian-Americans, who both cherish their home and culture and fully embrace their lives in Santa Barbara, it seems that the war is both unimaginably distant and horribly omnipresent.

Yakushko came to America from Soviet Ukraine at the age of 18. She attended a Christian college in LA on a scholarship and has lived in California ever since. As Ukraine changed with the Soviet Union’s collapse and Russia’s invasion of Crimea in 2014, Yakushko would regularly visit her family there. Her sister’s family lived in the capital, Kyiv, until two weeks ago when they fled by train.

Yakushko’s mother stayed a bit longer because of her limited mobility, but the fighting around her house got more and more intense. She sheltered in her house’s basement, and Yakushko would call her to keep her company. Describing those phone conversations, Yakushko said, “she was very scared, and I could hear explosions and then she would say, ‘there’s an airplane flying low. I have to run. You never know where the bombs would be dropped. […] Fighting with troops and tanks was just up her street often.”

Eventually, someone whose identity Yakushko still hasn’t determined picked up her mom and brought her to the train station. With standing room only, the train carried her for 12 hours to Lviv in the western part of the country. Yakushko’s mother described the journey as “very cold, no bathrooms, very very packed, [with] lots of upset people and children.” She plans to cross the border into Hungary soon to stay with friends in Budapest.

Because Santa Barbara remains relatively unchanged, Yakushko says she feels “strange and sometimes guilty.” From correspondence with friends and news reports, she describes the scene in Ukraine as “devastating. They’re destroying everything, killing everybody, and it’s very terrifying.” She continued, “There are people dying there right now and being bombed. And they’re destroying our schools, museums, our land, animals, and especially our people.”

While she recognizes that Russia’s pure military might may lead to short-term victories, she is overwhelmingly confident in Ukrainian’s love for their nation and fighting spirit. Yakushko described how for many Ukrainians, this battle is part of a long history of Russia oppressing its smaller neighbor. While Russia has dealt hefty blows in the 1800’s and through intentional starvation under Stalin, Ukraine’s biggest heroes were resistors who fought to secure Ukraine’s independence. This past has been echoed in the last few weeks as ordinary citizens rushed to volunteer in the war effort or constructed Molotov cocktails at home. A large majority of Ukrainians, those actually on the ground watching the war unfold, do not believe that Russia will ultimately be successful.

Primarily, Yakushko insists that the Russians are “not wanted.” She sees Russian President Vladimir Putin’s goals of “Denazification” and “liberation” of Russian-speaking people living in Ukraine as completely fabricated to legitimize his brutal assault. She is particularly critical of Russia’s disinformation campaigns at home, in Ukraine, and around the world. Just as the Russian government tried to interfere in the United States’ 2016 Presidential Election, she views Russia’s political machinations as the true source of separatist movements in the country’s eastern regions. She believes Putin’s real goal is to build a new empire with the worst elements of the Soviet Union: an absolute dictatorship, using propaganda to control the subjugated masses and poisoning political opponents and activists. These are all already happening inside Russia’s borders.

With all of the horrors taking place in Ukraine and the terror that the fighting could escalate to chemical or even nuclear warfare, Yakushko has found ways to help her people. She has put her practice on hold to stay in touch with her family and demonstrate to support Ukraine. She wants to ensure ordinary citizens are paying attention to the atrocities and get the American military to send more support to Ukraine. In a particularly touching display, Yakushko and her daughter who attends Santa Barbara Junior High handed out ribbons that let people show their solidarity with Ukraine at the Santa Barbara International Film Festival. In addition to providing psychological support to her children, she hopes to give them opportunities to act in a way that says, “I remember and I’m going to do something.”

Above all, this time has been incredibly difficult for Yakushko. Beyond her immediate concern for her family and home, Yakushko’s connection to Ukrainian culture runs deep. She is passionate in telling Ukraine’s history as the place “where the horses were tamed and trained first,” and recalls attending the 1500 year anniversary of the founding of Kyiv as a teenager. She describes the country as a place with beautiful mountains and rich soil as well as scientists, artists, and universities. During its history, the area has come under the control of many different empires and rulers and yet, Ukrainian identity has continued to burn in the hearts of every generation. Yakushko simply does not see that stopping now.

Dasha Lobko is a refugee of Russia’s war in Ukraine, although she has not always thought of herself in those terms. The UC Santa Barbara student left the country with her mother after sixth grade, as Russia seized Crimea and tensions began to escalate. While they had more “time to pack [their] bags” than the millions of people who are currently fleeing Ukraine, their departure was still motivated by the fear that their home was not safe. She “wasn’t from the richest family” in Ukraine, but her mother’s desire for security and high-quality education for Dasha guided their migration. After leaving Donetsk, which broke away from Ukraine in 2014, the pair went to the capital city of Kyiv. From there, they flew to LAX and came to Santa Barbara because they had friends who lived there.

Lobko was thirteen at the time. She says that living in Santa Barbara and attending Santa Barbara Junior High and Dos Pueblos High School provided many opportunities for her and her family, but she has always felt somewhat like an outsider. She has a distinctive accent—her first language is actually Russian, but she is now fluent in both Ukrainian and English. The horrendous attacks on Ukraine during the past month have brought the divide between Lobko’s heritage and current reality into even sharper focus. In Santa Barbara, Lobko describes the dissonance of seeing “people smiling and life [going] on, people [going] to restaurants, and just comparing this to what [she] sees on the news everyday.” Between lectures and homework for her biopsychology degree, she has friends in Ukraine texting her from “their flats, hiding in the corridors” or from bunkers.

Despite the distance, Lobko is very in touch with the sense of Ukrainian pride that has been empowering their resistance. In particular, she describes Ukrainians as “freedom loving.” Given their rich history, literature, and culture, it makes sense to her that they have fought back against Russia on so many occasions throughout their history. As for this current conflict, she views Russia’s claims of liberation for the eastern part of the country to be a sham. As someone who grew up in a Russian-speaking region of Ukraine, she recalls Russians “coming into the government buildings with guns.” In response to this Kremlin plot, however, she believes Ukrainian pride and solidarity has actually grown among people living near the border.

She also protested at the Santa Barbara International Film Festival, but her hopes are even bigger than Ukraine. Given all of the privilege and opportunities she has experienced in the United States, she hopes that her fellow Americans will utilize their power to pay more attention to violence everywhere. She believes that “most people are very kind in their hearts” but just do not always know the best way to help. In particular, she hopes people will donate to Direct Relief and Voices of Children, an organization that provides psychological support to youth affected by the war.

Lobko is confident in the long-term future of her country. She sees any short-run losses as the result of a powerful propaganda machine in Russia, but believes that that very mechanism will ultimately be their downfall. For Lobko, the false ideas of one man, President Vladimir Putin, are no match for the rich history and culture of an entire people. As for the Ukrainians, Lobko says that most people she knows who have fled the eastern part of the country are planning to stay in Kyiv. She says, “They’ve already moved one time. It’s an emotional burden to leave again and start a new life elsewhere.” And as for Dasha, once she graduates she plans to go into the medical field, just like the rest of her family.