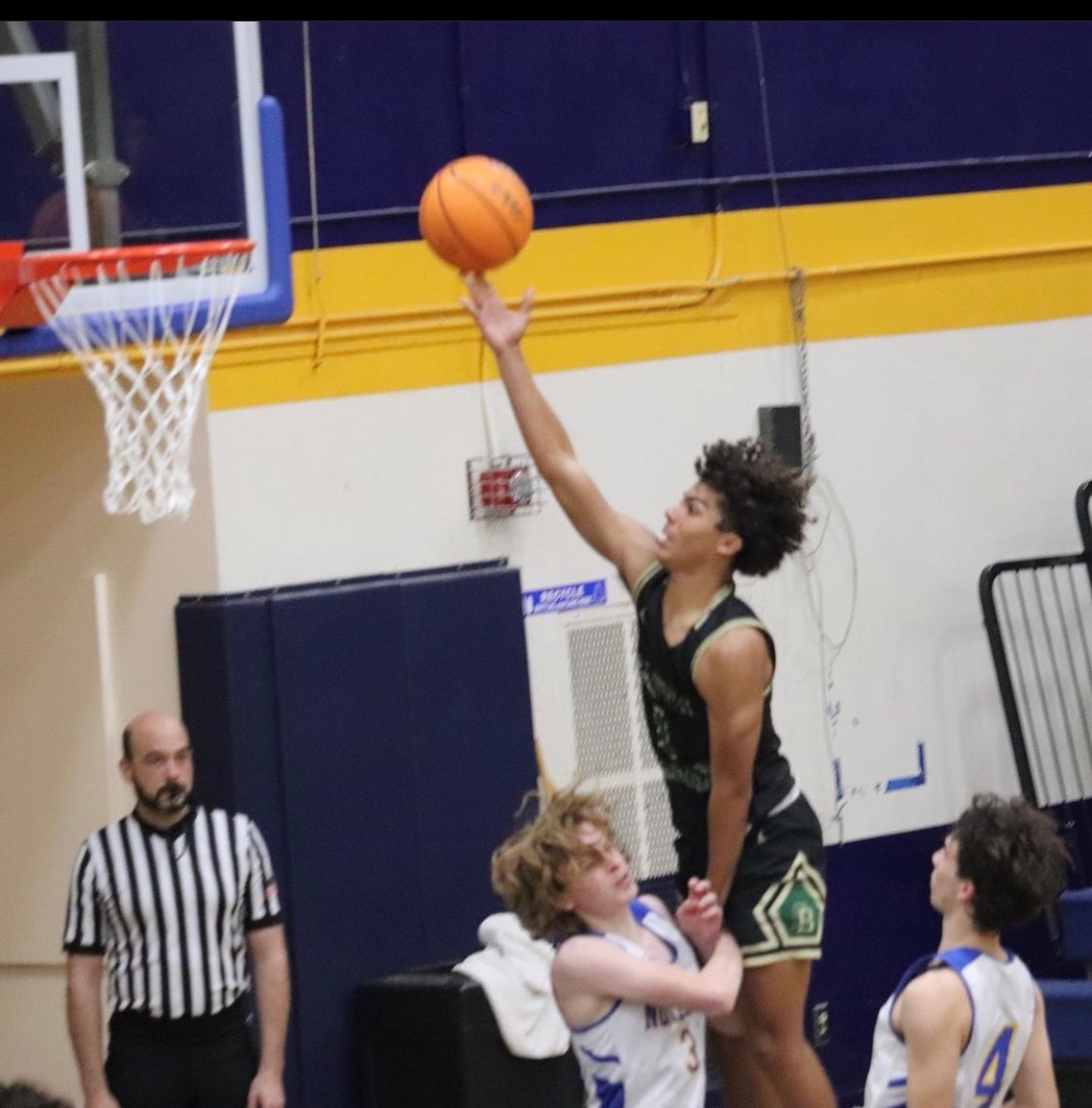 Once a year the Santa Barbara Athletic Round Table honors one student who has excelled athletically and academically by bestowing upon them the Scholar Athlete of the Year Award. This year, Santa Barbara High School’s very own Andre Battle was chosen to be honored.

Andre Battle began playing basketball at the YMCA when he was in kindergarten. Battle laughed, “I was terrible. My parents had to sew my pockets shut because I would run around on the court with my hands in my pockets, not wanting the ball.” He continued that once he got to junior high he really began to love it. Battle explains that this was when he played basketball with the SB Magic Basketball club and that this particular team was special to him because his parents Kareem and Laura Battle coached the team and, “I met all of my friends I have right now, literally are all from that team.”  Battle then went on to Santa Barbara High School (SBHS) where he played on the freshman team with his parents coaching in his freshman year and soon moved up to Junior Varsity and then Varsity in his sophomore year. “That’s really when I thought, ‘I love basketball.’ Because I didn’t think I was that good but then I moved up to Varsity in my sophomore year and I was like I should focus on this,” says Battle, “so sophomore, junior and senior year basketball was my main focus.”

The COVID-19 pandemic however made it difficult to do so. In Andre’s junior year SBHS sports could only meet on zoom for most of that year. “Yeah, it wasn’t fun,” Battle says.  Although Battle said that he was able to meet in person for his club basketball, being back in the JR Richards gym at Santa Barbara High after so long felt good. “The first practice back was the best practice ever. Just to be back, it was crazy. And the gym hadn’t been used in forever so we were dusting off the floors, it was just great.”

Although they were back in person, things definitely did not get easier for Battle. “This year there was a time when we had to practice with four kids when there were sixteen kids total on the team. During that span of time [December of 2021] I took about 15 covid tests. Like two a day.” Though Battle himself never got COVID, almost all of his teammates did, making practices hard and games even harder.

Through all of this Andre Battle persevered, keeping up the good attitude, and ended up being recognized by his coaches his senior year by making him team captain alongside Tucker Dilbeck. His coach told them that they needed to step up and be the calming presence for the team. During practices, Battle explained that it was just about keeping the team focused, but during games it was about keeping the morale up. “We didn’t have the best season, so [when we had] losses… [they might] start talking trash about each other. But we had to lift others and be like it’s just a learning moment and we got to just keep going.” Battle explained, “What the younger kids don’t understand is that we are just lucky to even be playing. At the beginning of the year our coach was like, ‘Yeah I don’t know about this season.’ We had four kids practicing for like two weeks. It was bad.”

During those times that the team was all together it was really special. Battle explained that the team all really bonded during this last season. “One time after a game we went to Dave and Busters and literally everyone on the team went, even our coach’s son and we just had the best time.” Moments like that really brought them together. Battle continued to explain that most of his connections are from playing basketball. “Literally 95% of my friends are from playing basketball. The bonds that I have created with basketball… and especially with my coaches, every coach I have had has been a huge role model for me.”

His family was also a huge part of his basketball experience. Battle explained that, “My dad, [Kareem Battle] wanted to finish his last season with everyone in the program. So my parents coached the freshman and the sophomore team and my brother was playing JV and I was on varsity so we’re like in the whole program. So yeah it was good. That was his last season.” He explained that it could be complicated at times with scheduling, “There was a time we were in the gym everyday for two months from 4 to 8, but it was also fun… Their games were fun to watch. Just because my dad and my mom yelling at other kids is nice,” Battle laughed, “But we all watch each other and it’s just crazy to be a part of everything.”

Alongside his focus on basketball during those years, Battle also focused on his other interests at SBHS. Battle explained that although basketball was his main athletic focus, he also does track and field in the long jump events and four by one just for fun. In addition to this, Andre Battle has also been a part of The Forge school newspaper since his freshman year. He has been sports editor since his sophomore year and wrote the majority of The Forge’s sports articles. “It’s just always been fun to write about sports. I have never gotten bored of it.” He explained that he was grateful to be sports editor because that leadership role gave him more of an opportunity to get into sports writing and be more of a part of The Forge. Battle says he has a lot of fun doing it and it’s cool to be a part of.

Meanwhile, Andre Battle finishes high school with a 4.6 GPA. Battle explained that it was a lot of work balancing his rigorous academics and athletics. “It was honestly kind of hard, especially with COVID too. My whole junior year was honestly pretty terrible. I was trying really hard…I took three AP classes and I was taking CC [City College] classes and then I had basketball with COVID. So it was just a lot.” “But honestly,” he continued, “after that year I thanked myself for doing that.”

Andre Battle is now fully committed to UCLA and is majoring in biology, “and hopefully something in marine biology.” Battle explains that ever since he was a kid going to the beach with his family he has been fascinated with wildlife. “I would look for animals at the seaweed without even thinking about it. Then it wasn’t until sixth grade that I was like, ‘Oh that’s an actual job I can get? Looking at sea animals?’” Battle also wants to continue his passion for journalism, “I love writing especially about sports, and I love interviewing people and getting to know their opinion… I definitely want to do something in journalism when I get to UCLA.” Although Battle will not be playing on the basketball team at UCLA, he is planning to continue playing for fun on the intramural sports teams on campus.

When asked what advice he would give to students entering high school right now, he said, “Just trust the process. There are going to be times for sure when you are going to be like, ‘Is this even worth it?’ But the feeling of getting into the college that you really wanted to get into makes all the nights staying up until 2am and having to say no to my friends on the weekend because I got to study for a big final just made it all worth it. To know that I have the next four years and I know what I want to do.”

The Scholar Athlete of the Year Award is well deserved for Andre Battle. All the hard work and dedication that Battle has displayed in every aspect of his student career should be an example of what every student should strive for and serve as a reminder to us all that hard work really does pay off.