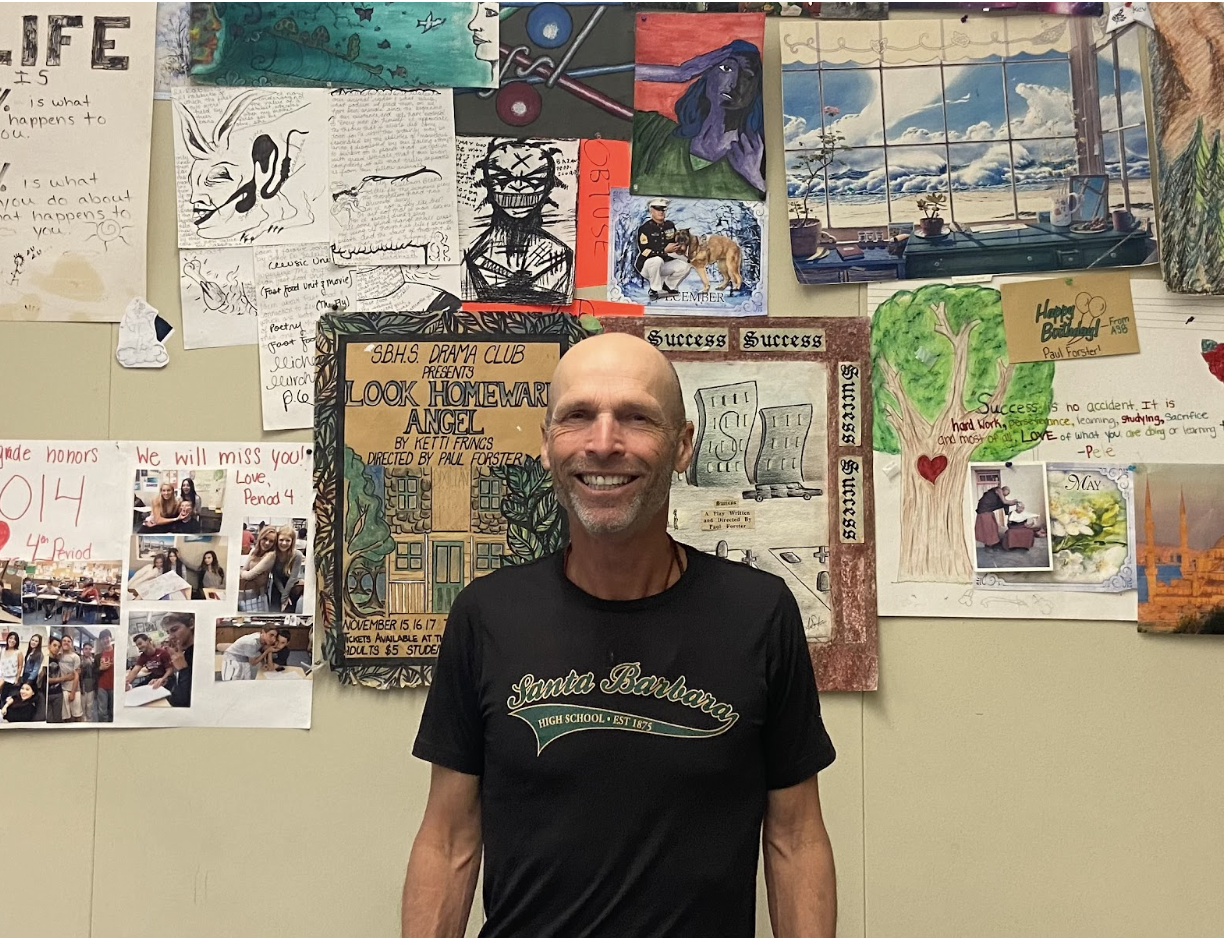 As the 2021-22 school year comes to an end, some beloved Santa Barbara High teachers have announced their retirement. One of these teachers is SBHS alumni Paul Forster. Forster has been teaching for  30 years with most of them being at Santa Barbara High School. He currently teaches AP English Language and Composition, English 11, and English 9 MAD down in the English building on the SBHS campus.

Being an SBHS alumni, Forster has seen the school take on multiple different forms and phases. He has seen it grow and become what it is today. When asked how his experience as a student at SBHS compares to the current students who go here, he responded that, “The school has changed incredibly, but so has our country.” He then elaborated by saying “the difference between the 1960s and 70s and now is enormous with political and technological differences …” almost everything [back then] was electives with only a few required classes.” He then mentioned various electives you could take to fill the English requirement, mentioning classes like poetry, short stories, English or American literature, or creative writing. He then follows it up with “there were guitars everywhere, all over campus there were kids sitting around and playing with guitars and performing hippie folk songs of the 60s and 70s.” He then goes on to mention a “ceramics studio in the quad and kids would be making pots.” The best comparison Mr.Forster had for the overall environment of his time as student at SBHS during the 60s and 70s was the movie Dazed and Confused,” a 1990 coming of age film that takes place during the 70s calling it “pretty accurate.” Mr.Forster then concluded by saying “the good side was kids were very low stressed and it was very slack and easy going, the bad side is (and I hate to say) but there wasn’t a lot of learning going on. It was pretty easy to get through [the high school] and not be challenged in any way academically.” He then compares his time as a student to present day by saying “the upside [of today’s learning] is students can be academically challenged more and courses are more rigorous, teachers can now say which skill is being taught on which day instead of them saying to the class ‘what do you guys want to do today’.” He does address the negative consequence of modern teaching by saying “The downside is kids are a lot more stressed, anxious, and depressed.” His claim can be scientifically backed up, according to research.com  “Seven out of ten teens in the U.S. (between 13 and 17 years old) have named anxiety or depression as a major problem among their peers in the community.” “Three quarters (75%) of American high schoolers and half of middle schoolers described themselves as ‘often or always feeling stressed’ by schoolwork.” With an involvement in one school for such a long time as Mr. Forster, his observations for student experience, school life, and teaching is one that should be looked on with significance when finding ways to better our community as he has seen this school take on many different forms and has seen the fundamental ideas of teaching change for better and for worse.

Moving forward with Mr.Forsters’ first years of teaching, when asked why he became a teacher he responded with “Initially, when I first started teaching… I thought it would give me a ton of time to work on creative artistic projects. I couldn’t be more wrong.” As a recent graduate of University of California Santa Cruz, Mr.Forster participated in many different arts and humanities such as musicals, theater, skits, writing, and a band. “I was just involved in multiple different stuff.” He wanted to pursue these activities once he graduated but he would later find another love, and that’s teaching students and proposing new ideas so they can learn and mentally grow and mature. When asked what his experience was like as a new teacher he responded very bluntly with “It was soooo hard!” Then elaborates by saying “ I was living with two other teachers and one of them quit by December, and in the first year or two I thought a whole mess of times ‘I can’t do this’.” When asked what specifically was hard he responded with “in the old days they would give the newer teachers the hardest classes. When I started out as a 26 year old no experience teacher they gave me the toughest class in the school.” He then mentions other specifics by saying  “When I started out teaching at San Benito [High School] they put me in 9th grade English filled with kids from all four grades taking my class either for the first, second, third, or fourth time. It was unbelievably difficult being a 26 year old little guy with these enormous kids, it scared me to death.” he followed up with “we didn’t even have phones in our class…I had no way of contacting the vice principal or principal… my class was in an old U.S. Navy hut far away from the main building.” When asked how he triumphed over his fears and struggles he responded with “we got phones in our rooms.” followed up with “that was a really big deal to be able to call an administrator, and by my third year I started getting other classes, classes with good kids that wanted to learn and that made a huge difference in being able to teach rather than discipline.”  He also was placed in the theater program “I had the ability to do the creative stuff I love.” “I thought ‘wow this is cool, I get to put on shows and be with creative and interesting people’.”

When asked what was a highlight of his career he responded with “being successful at theater was amazing” he put on shows like One Flew Over the Cuckoo’s Nest and Look Homeward Angel “That was an amazing feeling being at the back of the theater and the lights going down and standing ovations, talking about project based learning right?” He then pointed out another highlight by saying “If you look around [my] classroom you can see 5 or 6 posters made by the kids, and those were classes of kids that were just incredible. They all loved each other and learned about cool stuff, they were unified and all wanted to learn. Those classes were super high moments for me.” he then reflects on why they were highlights saying “the stuff that we were doing in here was incredible and how much value they are getting out of being here, it was stunning.” He then mentioned “I would pay to be here, I would pay to do this. These kids want to be here, I want to be here, I can’t believe I’m being paid to do this.” Followed up by “In those classes kids would be amazing, towards the end of the year they would all be emotional and crying and I’d be crying. The classes got to a point where everyone was friends with one another and kids would be in different seats everyday, it was so amazing to have an environment like that and that was a real high point in my career.”

When asked to give advice to younger teachers to have as long and impactful a teaching career as his, Mr.Forster responded with. “It is the greatest career in the world and it’s the hardest career in the world, you got to give it 110%.” He then follows up with “you’ve got to be willing to fail, to be a great teacher you need to love making your own curriculum and love to fail. Putting in hours and hours into a lesson just for it to fail, you have to love it and get back up.” Mr.Forster then references advice given to him by former teacher J.R. Richards “you’re gonna have days where the students hate you and the lesson and you have to be willing to keep trying.” “If you wanna be a great teacher you have to work hard.” Mr.Forster said. He then followed up with mindset advice saying “I always think, I can go out and plant one tree but what if I can inspire 35 young people to go plant a tree and they can inspire 35 other people. To be a great teacher you have to see the potential [in children]. If I can get these 35 young people really thinking then when it comes time to vote (for example) they can vote really intelligently and they individually can affect 35 other people.”

Finally, when asked what his life is going to be once he retires Mr.Forster responded with “I really want to do creative stuff, and more specifically silly creative stuff, writing plays and musicals.” Followed up by his love and appreciation for comedy and his desire to continue once he retires. He then quickly stated his will and love for travel saying “the best graduate school besides actual graduate school is traveling and it can be an incredible classroom.” Meaning new people and finding little nuisances of their way of life and culture is very mind opening for Mr.Forster as well as learning said cultures and their respective languages. He wishes to explore more of the world once he retires. Mr Forster is an avid supporter of Ukraine since his heritage traces back to the country and has been seen protesting U.S. involvement in the Ukraine Russian conflict during the Santa Barbara International Film Festival, with his new found time he hopes to volunteer and help in anyway to support Ukraine

While Mr.Forster is sad to let go of a place that has housed a good amount of his life, his memory of phenomenal teaching and impact on kids still lives on. From his absurd stories of haunted houses and crazy college girlfriends what I believe Mr.Forster will be best known by is the comfortable and welcoming place he has provided for decades in which kids can experience a new type of learning in which they can have the ability to question the world around them and find creative ways to express themselves or address real world issues. I think Mr.Forster will be remembered by the thousands of kids he’s helped to shape their individual perspectives on life.