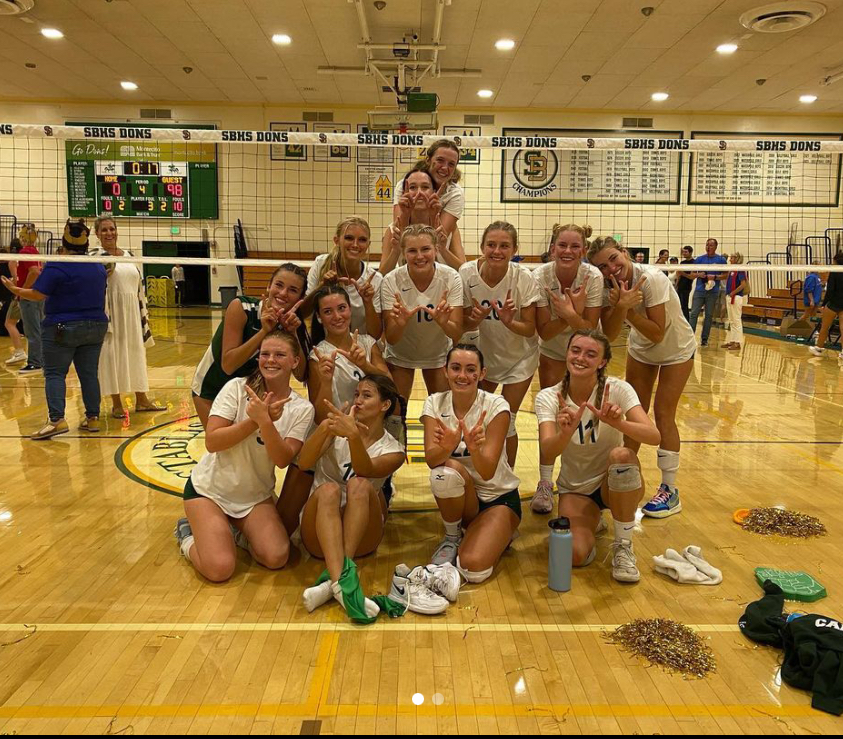 Girls Volleyball Take on Their Rivals

The Dons are on top of the world after defeating their rivals in an energetic, back and forth match. The Santa Barbara High School girls’ varsity volleyball team was victorious after facing San Marcos in one of the most important matches of the season. The match consisted of four sets, each one ending within a couple of points. Some essential leaders on and off the court were starting libero Tessa De Albergaria, and Assistant Coach Kim Zuffelato.

These two important assets had much to say about their team.  All the players researched their opponent via Hudl, an app that contains videos and stats of other teams’ previous games. This app helps with finding out strategies to approach when facing these teams. “A lot of our players have also played with or against the girls on SM’s team for many years, so they can tell us all they know about their tendencies.” Kim Zuffelato states.

The SM vs SB rivalry has been a very important part of Santa Barbara High School’s history and all our sports and clubs. Every person who has played a sport at SBHS understands the feeling of being able to face your rival in one of these big games. Varsity player Tessa De Albergaria thinks, “The nerves and excitement you have to play in a rivalry game is unmatched. The energy in the gym, stadium, or arena during a rivalry game is something that cannot be compared to any other feeling.”

The mindset and energy that this team had going into this game was unmatched by their rivals. They had a very focused mindset, which played an immense part in their victory. “We knew that if we believed we were going to lose, we would lose. That encouraged us to come together and talk about what key mentalities we should have coming into the match which helped our game a lot,” De Albergaria says about the match. Her mindset as a key player on the court played a big role in the Dons’ win.

This team has a great future ahead of them. They have been working hard daily, and their hard work has clearly paid off. After defeating their rivals in a 4-set battle, the Dons are prepared for any challenges they have to face this year.