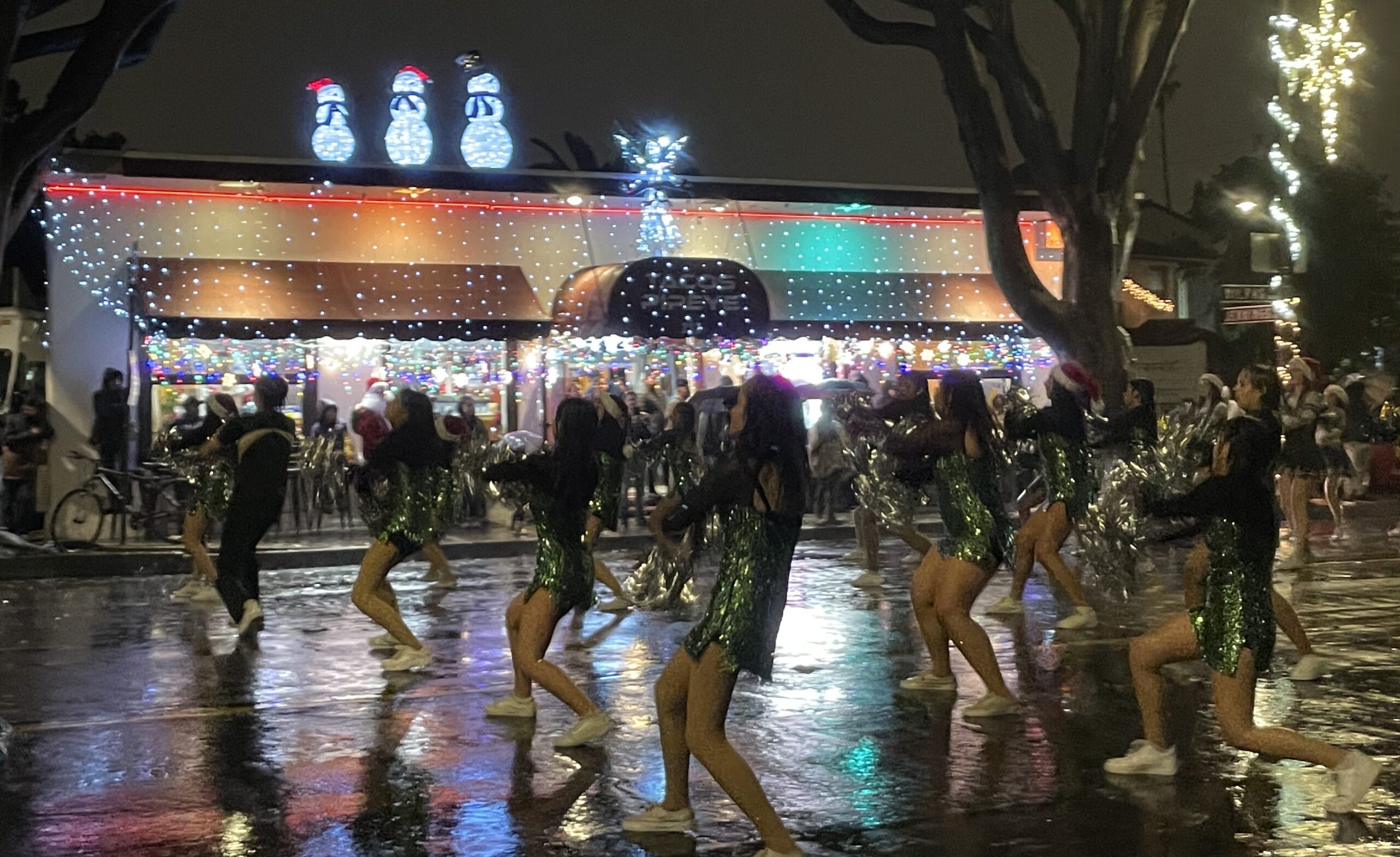 Santa Barbara High School’s marching band performed a mashup of popular Christmas songs in the parade. They showcased the musical and rhythmic talent of our school in Santa hats and festive lights adorning their instruments. Some marching band members jamming down Milpas included seniors Henry Thielker and Karol Hernandez. Henry has been playing instruments since seventh grade, where he started out on tuba and trombone. He played a massive tuba in the parade, and thinks Christmas music is so important to events like these because, “Christmas music is just very iconic, everyone knows what it sounds like….everyone knows the sleigh bells….it’s one of the most important things for Christmas time.”

Karol is a tenor saxophone and synth player, two very unique instruments. Marching with an electronic keyboard could prove quite difficult, so naturally, he played the tenor saxophone in the parade. He believes the band builds community by, “bringing everyone together through music.” The marching band was truly a determined group, and were able to play wonderfully despite the wet conditions.

Junior Tom Foreman is a team co-captain on the Santa Barbara High School Donnettes dance team. To Tom, dance is important because, “It’s just a really good way to connect with people and get out into the community and have school spirit.” He believes dance connects the community at Santa Barbara High School “a lot of different people take dance, and a lot of new relationships are formed, and I think it is a really good outlet for people.” Their performance at the parade deviated from their usual hip-hop pieces, and instead was a jazz-esque and drill-like performance. They performed alongside the marching band and cheer team in green sequin outfits, dancing to the marching band’s melody of Christmas tunes. Even the rain couldn’t stop the tight-knit team from performing each move in perfect unison.

The cheer squad performed an energetic dance routine at the parade alongside the marching band as well. The rain did not manage to dampen their spirits, and they were able to bring some holiday spirit to all the parade goers. Jaidyn Morris is a senior on the varsity cheer team, and she thinks cheer helps get people in the holiday spirit because, “we have energy and excitement, and we do our best to get people hyped.”

Viviana Ruiz is a junior on the Varsity cheer team, and has a similar sentiment, “Little kids seeing us in the parade with our shiny pom poms and Santa hats can get them in the spirit and get them excited.” She was definitely right! Varsity cheer member and sophomore Mariah Ramos loves, “seeing the smiles their cheers puts on people’s faces. “It just helps you get out of your comfort zone, shows you how to work as a team, and teaches you dedication and hard work.” Mariah thinks Cheer helps build community by, “raising people’s spirits. It helps bring people together and is a way of supporting the people around you and your community!”

The Milpas Holiday parade is a great example of the importance of community. Even in a downpour there were still hundreds of people huddled under umbrellas or embracing the rain head on, ecstatic to be a part of some holiday joy on Milpas. A big thank you to cheer, dance, and marching band for still performing to their fullest in the rain, and making all our Christmases and holidays brighter!