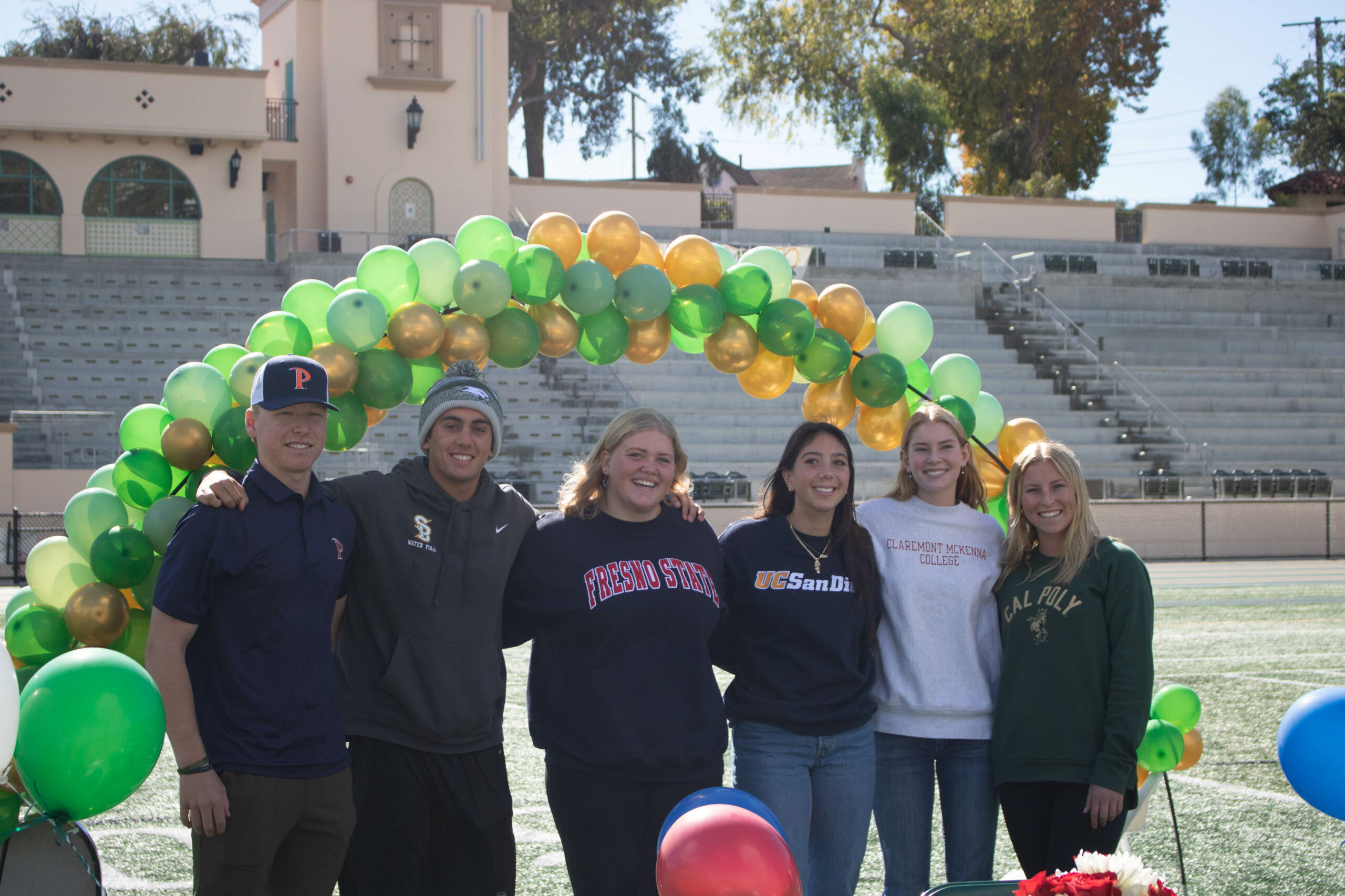 On Wednesday, November 9th six of Santa Barbara High School’s student athletes committed to continue their athletic careers in college. All signed their letters of intent at a ceremony held in Peabody Stadium.

Calvin Wipf signed to Pepperdine for baseball as an infielder. He hopes to be on the starting roster all four years and then continue by playing professionally. Wipf has been playing as long as he can remember; greatly influenced by his uncle Mark Wipf who played for the New York Mets as well as his grandfather who also played at Santa Barbara High and is a Santa Barbara Foresters Hall of Famer. Wipf started his baseball career early on in the Goleta Valley South Little league team and has since played for Santa Barbara High School and the Trosky National Team for the past three summers. Wipf would like to thank God, Coach Schuck, Coach Holguin, Coach Aguailar, and his family for helping him achieve his success.

Landin Romo has signed to Wagner College for water polo.

Maria Bittle has committed to Fresno State for water polo. Bittle plays offensive center for Santa Barbara High and both offensive and defensive center for her club team. Bittle has been playing club water polo for around eight years and for Santa Barbara High since her freshman year. She only wishes that she had started at an earlier age. Bittle hopes to thrive at Fresno State and improve under their coaching staff, and that the next four years will only help her improve as a player and a teammate. She would like to thank her mom for encouraging her to reach out to the Fresno State coach and her teammates who have supported her through the whole process.

Olivia Obando committed to University of California San Diego for water polo. Obando plays as a utility, or can be any position, but specializes as a center defender. She strives to join the starting lineup and to fully dedicate herself in order to succeed. Obando has been in the water since she was four years old and started water polo in elementary school. She has played water polo for nine years now, including four years on the Santa Barbara High team. One of her favorite moments while being a part of Santa Barbara High School’s team was her last freshman year game against Dos Pueblos when Santa Barbara went into three overtimes and one sudden death to eventually secure a victory. Obando said, “It was a super special moment that definitely brought our team together”. Obando would like to thank her parents and club coaches Cathy and Connor because they pushed her to work hard and dedicate herself.

Shae Delany has committed to Claremont McKenna College for volleyball. Delany plays as an outside hitter for Santa Barbara High. Delany has played for five years and competed for Santa Barbara High, Santa Barbara Volleyball Club, and the Los Angeles Volleyball Academy. She started playing in middle school and quickly fell in love with the sport. Delany then continued her career with club athletics. Currently Delany is training to secure a spot on Claremont McKenna’s starting roster. Delany says she loves her potential career “and wouldn’t change a thing.” She would like to thank Erika Lilley, a coach who was able to help continue training during lockdown and continue to help her grow as a player and an individual.