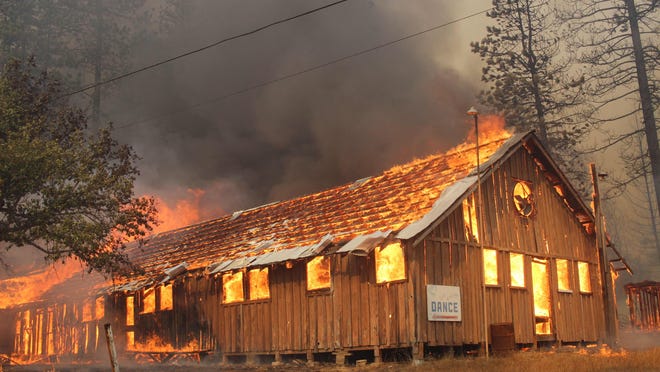 In what would seem to be an era of compounding crises, the wildfires still ravaging California seem to have taken a back burner to more prominent stories surrounding the pandemic and upcoming election. However, these fires are still burning strong across the West, and directly affecting the lives of people in our own community through smoke pollution. Specifically, air pollution in Santa Barbara has continued to fluctuate with weather patterns and the path of the fires, but at times, the amount of particulate matter less than 2.5 micrometers has reached moderate levels. These are particles which are smaller than the width of a human hair and can enter deep into the lungs and even the bloodstream. This level of pollution leads the Santa Barbara County Air Pollution Control District to suggest that “unusually sensitive groups” should “consider reducing prolonged or heavy exertion.” These numbers are updated daily and can be found here. More prominently, the smoke in the air has often led to the sun taking on an apocalyptic reddish hue as it sets over the ocean.

Dealing with the primary and secondary effects of wildfires is all too familiar to people in and around Santa Barbara as they recall the Thomas Fire that scorched the area at the end of 2017 and the start of 2018, causing an early and extended winter break throughout the Santa Barbara Unified School District. At the time, it was the largest wildfire in California history, but as the California fire season increases in intensity and duration, it is now only the fifth largest. In fact, the largest fire is one of the blazes currently raging, the August Complex, which began in Mendocino National Forest and recently became California’s first “gigafire,” a fire that has burned over one million acres. This is only one of the currently active fire incidents in a year that according to Cal Fire has involved 8,486 wildfires burning over four million acres. They have cumulatively led to the destruction of 9,247 structures and 31 fatalities. The other largest fire currently is the Creek Fire in Fresno and Madera counties which has burned over 330,000 acres.

Locally, around Santa Barbara, large swaths of the Los Padres National Forest, including popular spots for students such as the hiking and rock-climbing spot Lizard’s mouth, were closed due to high fire risk but were reopened on Friday, October 9th. The National Forest maintains fire danger warning of high to extreme, however, and building campfires is prohibited within the forest. These precautions are meant to mitigate the risks of a fire springing up around Santa Barbara. The fact that large areas of land have already been burned by the Thomas Fire does decrease the risk of a massive blaze somewhat, but a wildfire near Santa Barbara still remains a very real possibility. This could create a situation like those in Northern California, where the evacuation needs of a wildfire conflict with the social distancing needs of the pandemic.

The particularly destructive nature of this fire season does not seem to be an outlier but rather points to a larger trend in the data. According to a review of climate studies, climate change has been a major factor. According to Dr. Matthew Jones, a researcher at the University of East Anglia in Norwich, UK, “Climate change ultimately means that those forests, whatever state they’re in, are becoming warmer and drier more frequently.” These are the conditions that have led to not only the extraordinary fires in California, but also those in Australia earlier in the year. Overall, climate change is also contributing to other natural disasters such as prolonged droughts and more powerful hurricanes. Although many people tend to view climate change as a more long-term threat to humanity, these events are evidence of its immediate effects on those living in and around the Santa Barbara community.

For now, the risk of wildfires and the effects of those currently burning in other parts of the state remain in the periphery of local government as they struggle with the more immediate effects of the Coronavirus pandemic. However, this is something that could quickly shift, as climate change continues to worsen the fire conditions around Santa Barbara. As has been seen in other places, the effects of such a fire incident, particularly in the current state of the world, could be devastating for the community. For now, Santa Barbara can only hope that the destruction they are watching from afar does not once again become the reality they must live in.