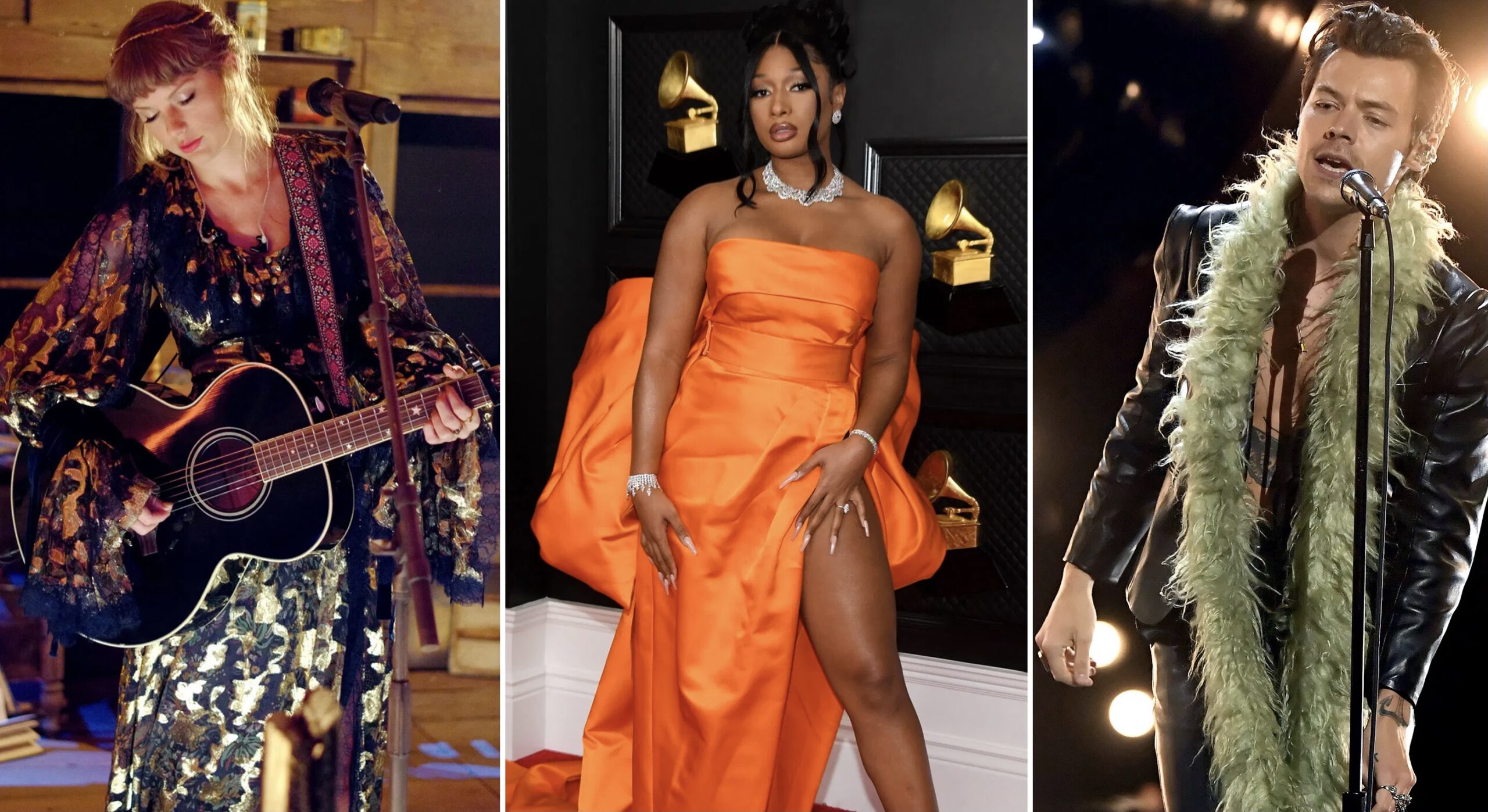 A Recap of the 63rd Grammy Awards

The 63rd Grammy Awards took place on Sunday March 14, 2021. Held outside of the Staples Center in Los Angeles and hosted by Trevor Noah, 83 awards were given out, however only the main ones were televised. In between awards, many talented performers shared performances with the viewers at home. The first Grammy Awards were presented by NARAS in 1959 in Los Angeles, California when 28 awards were given out. The number of awards have greatly increased as more and more music genres have come out. Rock was the first genre recognized in by the academy and a couple years later the next genre was Rap. The award for best music video was handed out in 1982. The number of awards grew and shrunk over the years until they stabilized the awards at 83 in 2017. For the 2021 Grammys, they had to change up the settings due to COVID-19. Half of the awards were announced on a livestream over Zoom before the televised awards. They limited the people attending to just the ones nominated for the big categories, They all sat outside socially distanced and wearing masks. The only times a person took off their mask was if they had won and were going up to get their gold gramophone award and give a speech.

The nominations for these Grammys were chosen by recording studios and Recording Academy members submitting their entries for consideration. The nominees were announced November 24, 2020 by the Interim Recording Academy President/CEO Harvey Mason Jr on an hour long live stream. Following the live stream the nominations were announced on the Grammy’s social media platforms such as Twitter and Instagram. The nominations included artists such as Billie Eilish, Harry Styles, Dua Lipa, Beyoncé, Taylor Swift, H.E.R, Megan Thee Stallion, and many more. Most of the nominees also spread the word on their social media showing fans what they were nominated for.

The show started by host Trevor Noah announcing himself and walking to the stages of the performers. The opening act of the show was Harry Styles performing his hit song “Watermelon Sugar.” The next performance was Billie Eilish with “Everything I Wanted.” The closing performer of this opening act was the punk rock sister band HAIM, and they did their song “The Steps”. They paused performances to give out awards and then the performances started back up again with the Black Pumas playing “Colors.” Next was rap artist DaBaby and Roddy Ricch with “Rockstar.” Then came the Latin singers Bad Bunny and Jhay Cortez with their single “DÁKITI.” After more awards, Dua Lipa made her appearance and DaBaby came back with her to perform their hit “Levitating” together. When DaBaby left the stage, Dua continued with her song “Don’t Start Now.” The following performance was Bruno Mars and Anderson Paak together as they debuted their first Silk Sonic song “Leave the Door Open.” And to finish up this segment of the show, Taylor Swift performed “Cardigan,” “August,” and “Willow.” After these performances, the show had a small memorial for artists who passed away, but have left a huge impact in the music industry. Silk Sonic took the stage once again and performed a remembrance to Little Richard covering one of his songs. Lionel Richie covered Kenny Rogers and Brandi Carlile sang John Prine’s Grammy-winning “I Remember Everything.” To wrap up the “In Memoriam’’ section of the show, Chris Martin and Brittany Howard performed Gerry Marsden’s “You’ll Never Walk Alone.” 4 country singers were next. Mickey Guyton sang her Grammy nominated song “Black Like Me,” Miranda Lambert was next singing “Blue Bird” from her album Wildcard. Finishing the country performances was Marren Morris who did a duet with John Mayer singing “The Bones.” The next category was the Rap category and opening was Megan The Stallion with “Body” and “Savage”. Cardi B then joined Megan to sing her song “Up” and together they performed “WAP.” More rap artists followed such as Post Malone, Lil Baby, Doja Cat, and Roddy Ricch. Closing the performances was BTS live from Korea performing their hit song “Dynamite.”

The pre-show awards were live-streamed on youtube a couple hours before the Grammys started. Following the pre-awards was the red carpet. All the nominees who were arriving to the in person awards showed off their outfits for the night before walking in. The most recognized award at the Grammys is Record of the Year and for the second year in a row, Billie Eilish took this award home with her song “Everything I Wanted.” Another award that is very well known is Album of the Year and this award went to Taylor Swift and her album Folklore. Song of the Year went to “I Can’t Breathe” by H.E.R which was a song she wrote about the Black Lives Matter protests. Best New Artist went to Megan Thee Stallion. Best Pop Solo Performance went to Harry Styles for “Watermelon Sugar.” Best Vocal Pop Album went to Future Nostalgia by Dua Lipa. “Savage” by Megan Thee Stallion featuring Beyoncé won Best Rap Performance and it also won Best Rap Song. Beyoncé won Best R&B Performance for “Black Parade.”

This year’s Grammy awards was a very big one for multiple artists and definitely one they will cherish forever. Beyoncé beame the most awarded woman in Grammy history with a total of 28. Beyoncé was also the most nominated artist for the 2021 Grammys and now has had 79 Grammy nominations. She also won six Grammys in one night which has only been done by one other artist. Lastly, she won seven Grammys for consecutive albums, a record that she shares with 3 other artists and groups. Her daughter Blue Ivy became the second youngest person to win a Grammy for her writing credit on “Brown Skin Girl” which won best music video. Taylor Swift is now the first woman who has won album of the year three times. Her previous two albums that have won are Fearless and 1989, and now Folklore is one of them. Overall, this Grammy Awards was very entertaining and had a lot of amazing performances and well deserved awards. Under the circumstances with COVID-19, they did an amazing job at making it feel like how an award show before the pandemic would feel.