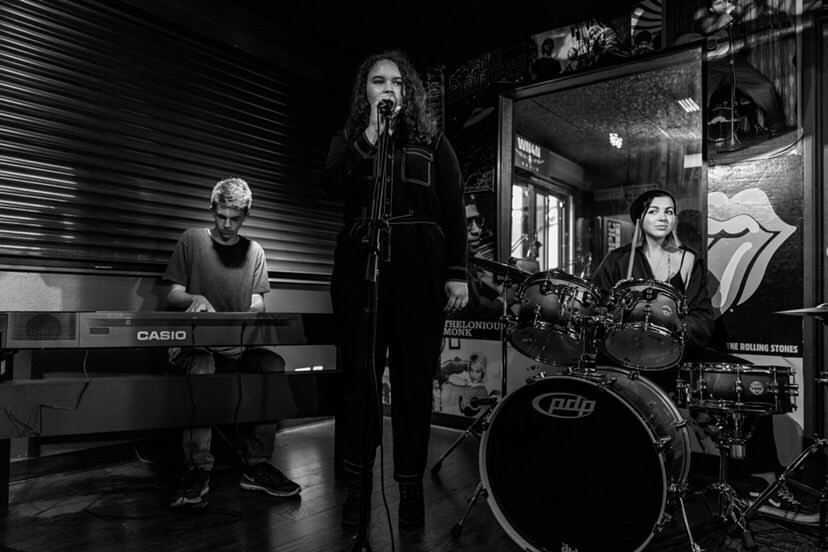 Artist of the Month: Jaelie

The artists of the month for April are Raven O’Donnell, Cassandra Stewart, and Arlen Abbey in a band called Jaelie. The band is the three of them and was started two years ago. Arlen plays piano and creates beats for the songs. Raven works on beats as well and plays drums while also focusing on the advertising side for the group. Cassandra works on the lyrics and all forms of vocals within the songs.

I asked them about their passion for music and how it started. Cassandra said that she started singing from a young age and has always loved singing and songwriting. Raven learned to play music back in elementary school, found a passion for drums, continued playing drums into high school, and is now part of the marching band and drumline at SBHS. Arlen would always gravitate to the piano at his grandma’s house. When his grandma picked up on this, she put him into piano lessons, and he has been playing piano ever since and is now in jazz and drumline as well at SBHS.

They shared the story of how they met with lots of enthusiasm. Arlen told the story of how he and Cassandra met in his freshman and sophomore years in Spanish class. He said that they knew little of each other and their relationship consisted of giving the other a pencil or eraser when the other needed one. And it stayed that way until one day she said that she wanted to start a band and he mentioned that he plays piano. From there, Raven joined the band and became introduced to Cassandra through a mutual friend. While awkward at first, they have all become close friends with each other.

I asked them about what they plan to do after high school and if they still want to do music together. Arlen explained that they have learned to do the band meetings over zoom because of the pandemic so it really wouldn’t make that much of a difference if they were far away from each other at college. None of them plan on pursuing music as a career but hope to forever have a passion for it and keep it in their lives. Even in college, when they have hectic schedules, they still hope to use music as a creative outlet for themselves.

I could tell through the interview that not only are they band mates but close friends and that their relationships with one another go beyond music. Their passion is evident through the way they discussed the creative process and their stories with music. It’s interesting to see the way music can bring people together and affect people’s lives.