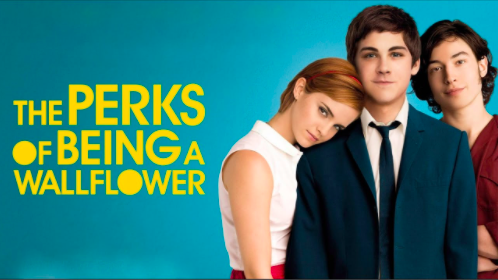 The Perks of Being a Wallflower

This movie is about a teenage boy named Charlie (Logan Lerman) who has just started high school. He doesn’t have many friends and is very quiet and introverted. He is an aspiring writer and writes a series of letters to a “friend”. He takes a shop class and one senior stands up just to make fun of the teacher and makes quite an impression on. Charlie, later that night at the football game he builds up the courage to go sit with Patrick (Ezra Miller). He then becomes pretty good friends with him and his stepsister Sam (Emma Watson) who he actually has a crush on. He starts taking his first steps into drugs and alcohol and going to parties. He soon gives up on his crush on Sam when she gets a boyfriend named Craig. He stays away from his friends for a while. Patrick ends up getting in a fight and Charlie comes to save him so he is friends with his friends again.

This movie is probably one of the most realistic presentations of some of the challenges that a lot of high schoolers have to face. This movie is actually one of my new favorite movies and is filled with so many emotions. I was amazed by the display of how all of the events played out, with Charlie narrating by writing letters to his “friend”. It was one of those movies that you wish would never end and could keep going on forever. It is definitely a movie to make you cry. It is filled with plot twists and will definitely hook you in to the movie. This move is one of my top 5 coming-of-age movies. I would recommend it for people who like coming-of-age and emotional romance movies.

One aspect of this movie that I really liked is the fact that Charlie went through all of these ups and downs and always got through them. It is really inspirational to young kids his age that may be going through the same things or something similar. I really love the whole plot of the movie and everything about it but that was just one thing that really stood out to me. This movie is one of the very few that have actually made me cry. Like real tears and real emotions. It’s not one of those movies where you feel like you should cry but you can’t.

My overall review of this movie would be about a 4.5/5. The only thing about this movie I would change is that some things were a little bit confusing and out of context. I think you actually really have to be present while watching the movie to fully understand what is going on with Charlie and what his “flashbacks” and his letters to a “friend” actually mean. It is hard to understand some things too if you haven’t personally gone through the same things or similar things. But other than that, the movie was absolutely amazing and it should definitely have more recognition.