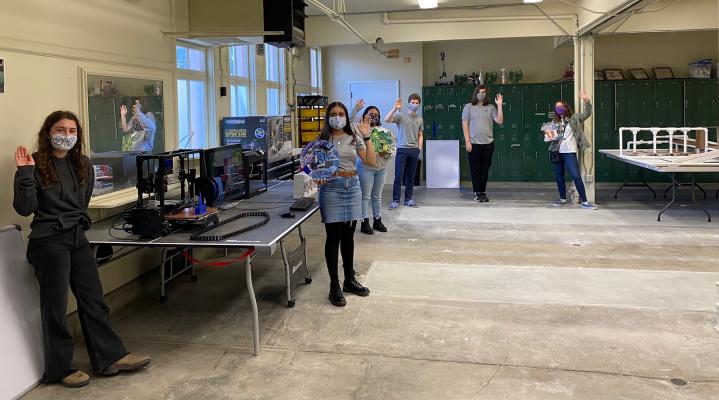 It may be tightly tucked away behind the library and underneath the theatre’s steps, but once you enter the doors of the Computer Science Academy, you will find yourself in a rich community of computer programmers, designers, and engineers. The CSA, with Sky Adams as its new director, has worked hard to keep this community active during the pandemic. Although Computer Science is primarily a digital endeavor, remote learning presented serious challenges for the academy. For one, Adams described the challenge of helping students with their code. Programming can be a very collaborative endeavor, but with online learning, Adams lacked the ability to look over student’s shoulders and directly help them debug. It also made it harder for students to work together on tasks and projects. Even back in-person, distancing requirements still make collaboration difficult. However, Adams worked hard during the pandemic to bring in exciting new speakers who work out in the field to give talks over Zoom, and sent out recurring newsletters on all of the latest and greatest going on in the CSA.

One notable feature of the Computer Science Academy is its status as an “open” academy. This means that any student at Santa Barbara High School can take classes with the CSA, join clubs, and even earn CTE Pathway certificates. Adams encourages all students to join. Her main message is for students to not “be afraid to try it.” Dispelling a common misconception, she also emphasizes that students who struggle in math should not feel like they can’t succeed in computer science, because language skills actually tend to play a larger role. The CSA’s intro courses are aimed at students with no prior experience. Adams recommends that students who are interested take either Exploring Computer Science or Computational Art. If they’re still interested in furthering their computer science education, they can talk with their teacher to determine what higher level courses they may want to take.

Like other academies and clubs on campus, the CSA also engages in numerous field trips to supplement their student’s education and give them insight into possible career paths. For obvious reasons, they were unable to take these trips this year, and while much remains up in the air, the academy is planning to resume them in the 2021-2022 school year. On these trips, students usually have the opportunity to visit tech companies and startups in places like Silicon Valley and “Silicon Beach” down in LA.

Karleigh Dehlsen, who is this year’s Top Don for the Computer Science Academy, has attended the CSA for all four years of high school. She first found out about the program through the junior high showcase at Earl Warren Showgrounds. She had no idea computer science would be such a passion for her, but once she realized the creative potential in the field, she became deeply invested. Some of her best memories of the program involve its field trips, and particularly getting to see the Mars Rover under construction. She is also the President of the Maker’s Club, successor to the Robotics Club. While the club does still compete at the BotBall competition every year, they’ve also expanded into mechanical design and electrical engineering. This has meant exciting new equipment for the students to work with, including a laser cutter, a miter saw, and 3D printers. Dehlsen is very grateful that she took advantage of all of the opportunities that the academy offered during her time at SBHS and is now looking to study Cognitive Science at UC Berkeley.

This year, Computer Science Academy enrollment increased significantly, and next year, the CSA is looking at an even larger enrollment boost. Adams attributes this to the new block schedule allowing students to take more classes and more outreach to junior high students. She also thinks that because computer science is becoming such an important skill in the modern economy, more students are taking an interest in it. Additionally, computer science classes are open to all students at Santa Barbara High School, and the program is always looking for new and excited students.

More from AcademiesMore posts in Academies »