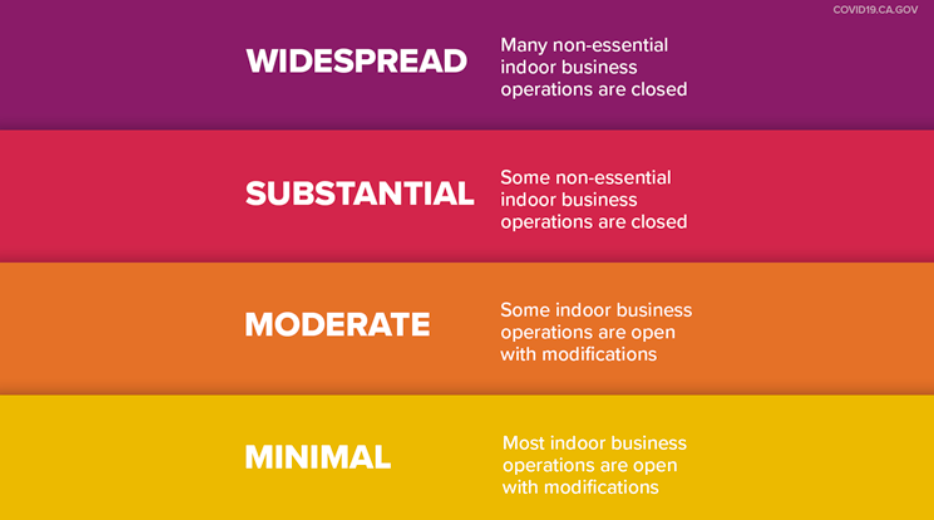 On Tuesday, April 20, Santa Barbara County advanced to the orange tier after being stuck in the red tier for several weeks. The orange tier allows more capacity in businesses and public places. The majority of California counties are in the orange tier at the moment.

There are four stages in the whole COVID reopening process: the worst is purple, the widespread tier, where almost everything non-essential is closed. Red is second-worst, meaning some of the non-essential businesses are still closed. The tier we are in at the moment, orange, means some of the indoor businesses are open with modifications. The final tier, yellow calls for most or all indoor businesses to be open with modifications. With the county opening up, retail stores will be able to open at 100% capacity, Movie theaters can open at 50% capacity, Hotel facilities will be allowed to reopen along with gyms at 25% capacity. The county has seen a 21% decrease in active cases from April 5 to 19, which allowed the county to open more. For example, a maximum of 25 people were allowed to gather in the red tier, but in the orange tier, the maximum has been brought up to 50, since the county has been slowly decreasing in cases. Private events can have 100 people outdoors, or 300 if they all have negative COVID-19 tests or vaccinations, along with indoor private events being allowed to have 150 people with proof of negative tests or being vaccinated.

Since moving to the orange tier, around 52% of the Santa Barbara County population has at least had their first shot, along with 29% having been fully vaccinated, which is great for the higher possibility of being able to move faster towards the lowest yellow tier. The number of cases is decreasing so fast that advancing to the orange tier is safe and a responsible choice for the county. Within the clinics, they allow between 50-250 appointments per day. This allows for more vaccinations to occur, making the county as safe as possible. To reach the next tier, the minimally restrictive yellow tier, the county has to remain in the current tier assignment for three whole weeks. The county Public Health Department released new guidelines for businesses within the orange tier late on Tuesday, April 20 which officially went Wednesday, at 8 a.m.

COVID-19 vaccinations were opened up to everyone aged 16 and up in Santa Barbara County on April 9, six days ahead of the state’s schedule for distribution. The Pfizer vaccine is the only vaccine being administered to 16 and 17-year-olds since the other 2 vaccines have not been approved for underage recipients. So far, about 45% of Californians have gotten at least one dose so far, which will help slow the spread of COVID. With 28.7 million doses administered, hopefully, soon enough a majority of California will be fully vaccinated. The more people vaccinated, the faster we will be able to open the state up to more activities and businesses. This will also help us get to the yellow minimal tier, with most indoor businesses fully open with modifications.