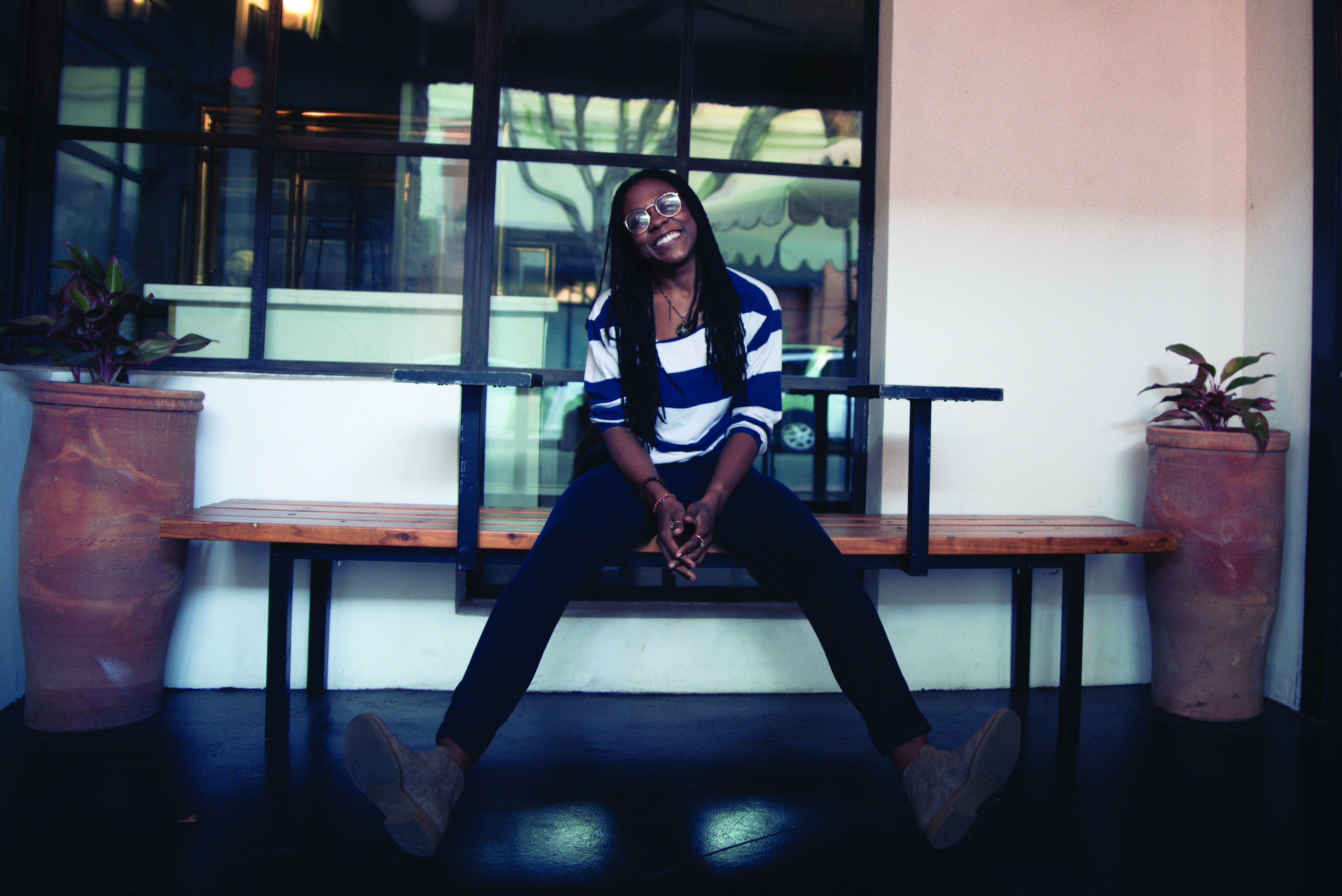 Talitha Gabrielle Shows Her Soulful Side

Santa Barbara High School has long been known as a breeding ground for passionate artists of all kinds. Between the Visual Arts and Design Academy and the renowned performing arts departments, teachers and students have strived to create an environment where artistry is central to student’s experience. However, there is one particular artist who has been hiding in plain sight: Santa Barbara High School’s own Talitha Blackwell, the Technical Director of the Theatre Department. While many have had the chance to work with her in the Stagecraft elective and the theatre department’s productions, as it turns out theatre is her day job. When she’s not teaching students how to use power tools and constructing impressive sets, she records original music and covers under the moniker Talitha Gabrielle. On her recordings, you’ll uncover a powerful but intimate voice backed by sensual acoustic guitar, impassioned drums, and layered harmonies. She sings about love and heartbreak, desire and loss, all in a richly stylized voice that’s reminiscent of the jazz age. Originally from a musical family in Hampton, Virginia, Blackwell’s pursuits in music and theatre brought her to Atlanta, Georgia and then out west to Santa Barbara. While she works at Santa Barbara High School, she continues to write, record, and perform her music in the community.

As a child in Virginia, Blackwell was surrounded by music on both sides of her family. Her dad played the organ and her mother sang in their local church. With music “in [her] blood” Blackwell soon picked up the acoustic guitar. She was originally inspired by artists like Amy Winehouse whose stylized craft repopularized jazz singing. Specifically, Blackwell valued the emotional depth of Winehouse’s storytelling and knew that was something she wanted to accomplish in her music. Jazmine Sullivan also heavily influenced Blackwell’s sense of vocal melody and what she described as her “vocal calisthenics.” Blackwell credits Lauryn Hill and India Arie as other major influences. Blackwell originally began writing neo-soul music, but over time her artistry on the acoustic guitar morphed her music into something more unique. All of these elements have combined to create a sound that is rhythmic, personal, funky, and new.

Blackwell’s music is intensely emotional but also feels joyous in its celebration of life and music. On “Eyes,” from her EP Little Bird, Blackwell sings, “Eyes like a starry night/ cover me with your shine.” Blackwell finds these beautiful moments in life and expands them into powerful emotional journeys. On “Remedy,” Blackwell howls, “said I’m looking for a good time.” While most of her music focuses on love, Blackwell found that in particular “It’s a lot easier for [her] to write about heartbreak.” These feelings are expressed clearly through Blackwell’s music but never in a way that makes the audience feel weighed down. Instead, they feel empowered by Blackwell’s persistence in the face of her struggles.

After writing and playing for four years in Atlanta, Georgia, Blackwell was finally brought out to California. Blackwell had supported herself as a set dresser, but political turmoil in Georgia caused much of the film industry there to shut down. Her sister told her about a job opening at the Pacific Conservatory of the Performing Arts up in Santa Maria, and Blackwell made the leap. While in college, Blackwell had been brought in as an audio engineer to work on musicals. That’s when she discovered her love for theatre. She’s always preferred live music to recordings, and theatre captured the essence of that feeling. She also found that she could apply many of her skills in sound design and music to the shows she worked on. When she brought her music to an open-mic night, she was exhilarated by the reception. She found an even more enthusiastic crowd in Southern California than in Atlanta and redoubled her focus on her craft. After gigging in Utah for a summer, she knew she had to return to California. That’s when she found out there was a job opening at Santa Barbara High School.

At first, Blackwell was somewhat apprehensive about working with students who were still in the process of self-realization, but she soon discovered her passion for helping young artists to grow, and she is constantly inspired by her students. Because of the timing of the pandemic, Blackwell is still establishing her roots in Santa Barbara. As restaurants and clubs are reopening, she is getting her setlist together and getting ready to show Santa Barbara what she’s all about. With her trusty guitar in hand and the emotional intensity of her lyrics, Blackwell is sure to make an impact. Talitha Gabrielle’s new EP, Pretty Bird, is out now and available on most streaming platforms