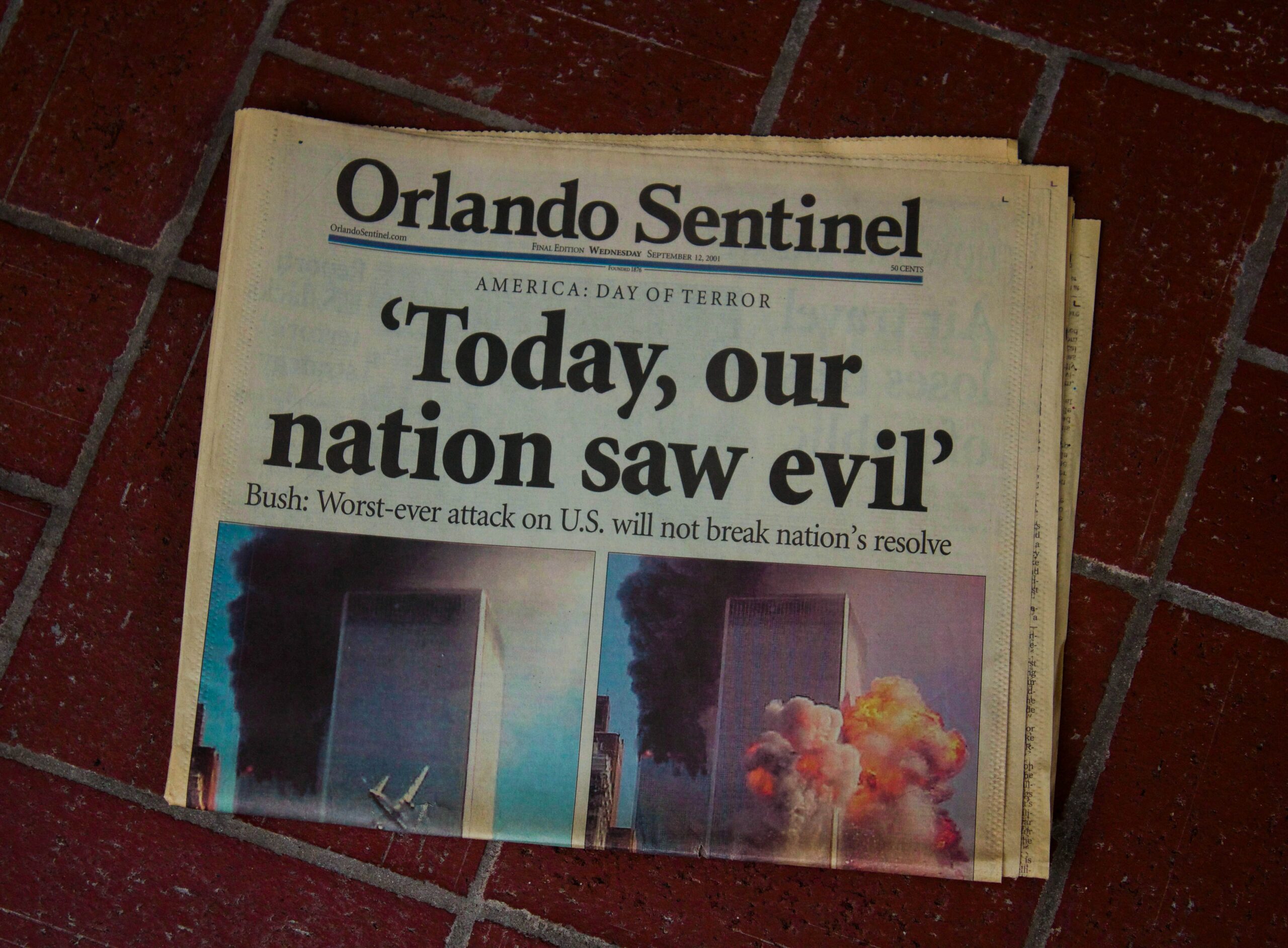 It has been 20 years since the tragedy on September 11th, 2001. No one alive then or learning about it now will ever forget that day. On that day, 2,977 people passed away in one of the biggest terrorist attacks in the world. Four commercial airliners (American Airlines Flight 11, United Airlines Flight 175, American Airlines Flight 77, and United Airlines Flight 93) were hijacked by a group of 19 al-Qaeda terrorists. The hijackers were organized on the planes into three groups of five and one group of four, with one hijacker in each group having some flying experience. These four, when hijacked, later crashed at the World Trade Center, The Pentagon, and at a field near Shanksville, Pennsylvania. The flight that hit the first target in New York City was Flight 11, hitting the North Tower of the World Trade Center at 8:46 am. Seventeen minutes later, at exactly 9:03 am, the South Tower of the World Trade Center was struck by flight 175. Both towers collapsed within an hour and forty two minutes later. Flight 77 then crashed into the west side of The Pentagon in Arlington County, Virginia at 9:37 am. The fourth flight was Flight 93 and crashed into a field near Shanksville, Pennsylvania. Flight 93 was on its way to Washington D.C. and it is believed that if the passengers didn’t overrule the hijackers it would’ve hit the capitol or white house.

Now, 20 years later, Saturday, September 11th, 2021, President Joe Biden flew to all three crash sites to acknowledge the victims from that morning. According to Reuters, Joe Biden arrived in New York City with former presidents Bill Clinton, Barack Obama,first lady Jill Biden and former first ladies Hilary Clinton and Michelle Obama. They all had a moment of silence at 8:46 am to remember when the first plane hit the North Tower. At that time, heads were down as they listened to relatives read the names of those who passed away. Later that morning, Biden then flew to Shanksville, Pennsylvania, before heading to the Pentagon. The passengers on Flight 93 were true heroes because they were able to stop another plane from hitting another target and by overpowering the hijackers. At Shanksville, he visited the memorial for Flight 93 where all the names of the passengers are engraved into a marble wall. Although Biden didn’t say much at any memorial he visited, he did make a video Friday expressing his deep condolences to the families affected from 9/11. Lastly, the Bidens then flew to their last stop at the Pentagon with Vice President Kamala Harris and second gentleman Doug Emhoff. They all touched a memorial where there is a series of benches that have been placed for all 184 victims.

Although at the time nearly 3,000 people died, 20 years later many 9/11 survivors are impacted by long lasting impacts to their health. Illnesses are a common occurrence from when people breathed in debris or were in the dust and smoke from when the twin towers fell. Many ailing from this are first responders from NYC. The New York Times stated “off the 111,005 ground zero responders and survivors enrolled in the World Trade Center Health Program, 4,610 have died, according to officials at the Centers for Disease Control and Prevention.”

According to The New York Times one person who suffered from a 9/11 related illness was Daniel Foley who died in 2020 at the age of 46 from pancreatic cancer, the underlying cause believed to be attributed to 9/11. The New York Times stated that his illness was most likely  “linked to his exposure to airborne debris while he searched for survivors at ground zero, including his firefighter brother, Thomas J. Foley, 32, whose body was found 10 days after the collapse.” Many people to this day are still dealing with the aftermath of 9/11 and hopefully the death toll will stop rising.

Locally, at the Santa Barbara County Courthouse was the first annual 9/11 Flag of Honor Across America Memorial. CADA, a teen court program, was selected to be a part of the 60 participants across the country to lead the national project. It was held at the Sunken Gardens at 9 am that Saturday. Noozhawk cited  that the ceremony took place across 60 communities and they all joined together to remember the lives lost on 9/11 and the bombing on February 26, 1993. This event was the largest 9/11 remembrance in the country for the 20th anniversary.

The outcome of that tragedy truly changed the world and especially the United States forever. Here we are 20 years later still remembering the lives we lost and will never forget what happened on the morning of September 11th, 2001.

Published in Politics and Features