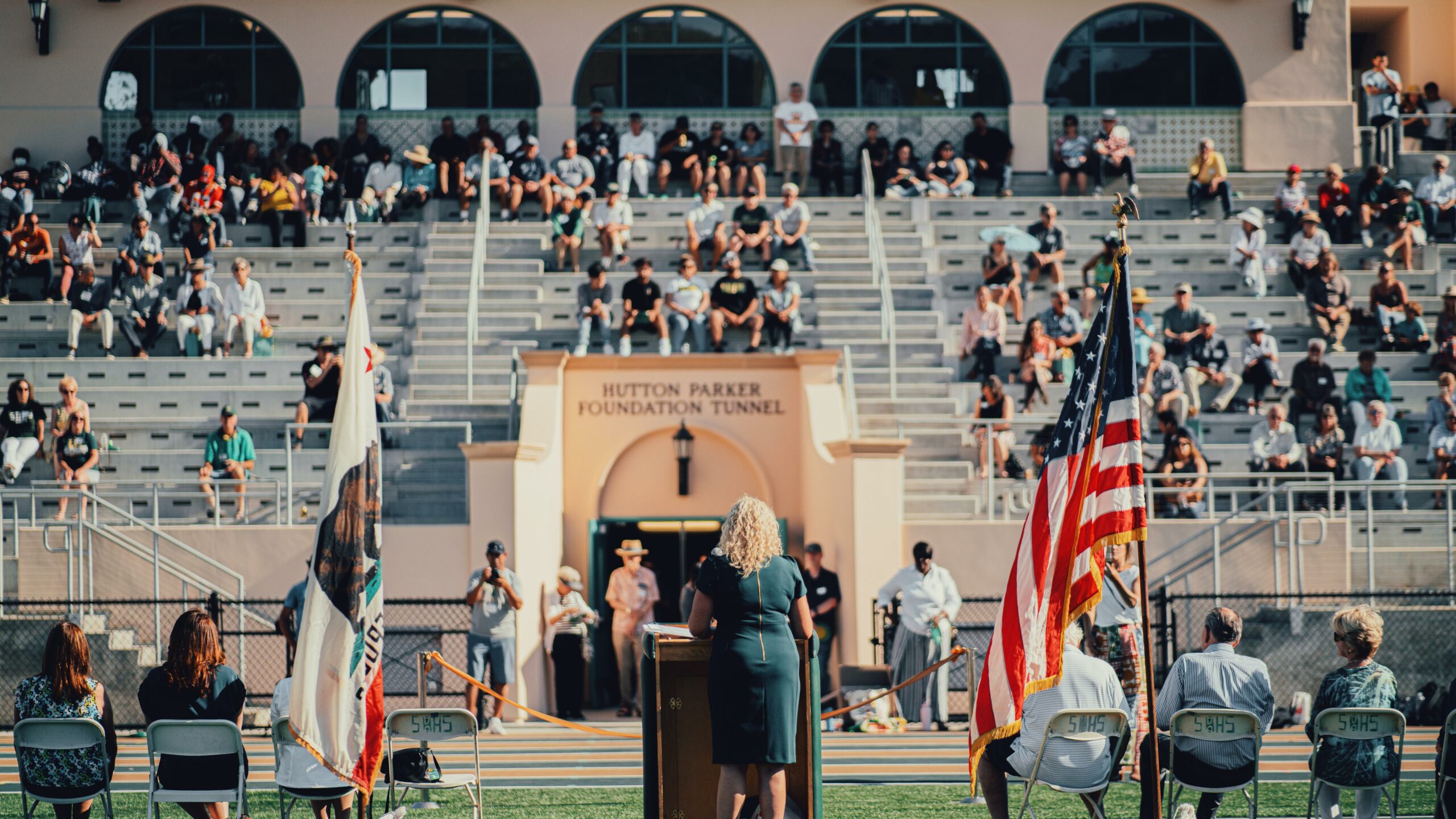 The energy was electric at the newly renovated Peabody Stadium as generations of Dons filed in to celebrate the completion of a years-long, community-led construction project. School board members, donors, Principal Elise Simmons, Mayor Cathy Murillo, and ASB President Lila Gibson were among those who lined up to officially cut the ribbon while the crowd in the massive new grandstands looked on in wonder.

The immense community support for this renovation project has been illustrated by just how much it has endured: multiple principals and superintendents, almost two years of delays, and a global pandemic. But now that the project has finally been completed, it is clear that it was worth the wait. Spectators expressed their awe at the new stadium and its state-of-the-art features. Donor David Borgatello described the completed stadium as simply “beautiful.”

The event, which took place at the start of July, was originally planned as a private gathering, but with loosening Covid restrictions and the immense excitement of the community, it was opened to the public. The SBHS Madrigals performed at the beginning of the program, and donors and administrators spoke on the success of the project and the importance of high-quality athletic facilities. Cheerleaders, athletes, and other students shared in the revelry.

The initial aim of the project was the improvement of the track, but it soon evolved into a complete overhaul of the historic stadium. The initial $5 million of funding for the project was raised from private sources by the Foundation for SBHS between 2014 and 2016. They broke ground back in August of 2017, and the stadium has been under construction since then. In the meantime, various sporting events and ceremonies were held at SBCC and the Santa Barbara Bowl. An additional $34 million of funding came through various sources including voter-approved bond measures. Capital Campaign Chair Greg Tebbe was included in those who spoke at the ceremony.

Among the stadium’s remarkable improvements is the new synthetic track which is made of the same quality material as those used in the Olympics. This track adheres to the CIF’s standards and will allow SBHS to host competitive meets for the first time since the 90’s. The track is dedicated to the four Cunningham brothers, each of whom left a mark on SBHS’s athletic history. The eldest, Sam, was high school state champion in the shot-put, and went on to play as a fullback for the New England Patriots. Unfortunately, Sam was unable to attend the ceremony and recently passed away due to unknown causes. Randall, the youngest, was a star quarterback and went on to play for both the Philadelphia Eagles and the Minnesota Vikings. Following his retirement, he also coached football at Silverado Springs High School. Randall attended the ceremony before flying to Tokyo to coach his daughter in high jump for the 2020 Olympics. Both brothers were important figures in the fight for racial equality in professional football at a time when discrimination was common.

Other improvements to the stadium include the installation of artificial turf in the field to allow sports to play and practice year-round. The lighting and sound systems were renovated to increase energy efficiency. A new press box was installed with stunning views of both the field and the Riviera. Superintendent Hilda Maldonado spoke about the importance of these improvements, saying that “students connect to school via the academics, the arts, or athletics. For those who are drawn in by athletics, this shows how much we care about them.”

A majority of the money for the project actually had to be spent on below-ground improvements though. A major complication for the project was that Peabody Stadium happens to be located on the drainage basin for the Riviera, meaning that it must have an impressive ability to route water. Two old storm drain conduits were replaced to prevent flooding during storms.

Various other parts of the stadium are named in honor of the people who made the project possible. The Hutton Parker Foundation Tunnel, where athletes can enter the field from, is named in honor of the Hutton Parker Foundation which provides grants to community organizations. The MarBorg Industries Plaza is named after the waste management company which is run by a prominent multi-generational SBHS family, The nearby Veterans Memorial which honors SBHS alumni who have died in the line of duty is named for Doug Allred, a real estate developer who played football at SBHS and the University of Arizona, and his late wife Ann. Everyone who gave over $10,000 to the project is commemorated in the Peter and Gerd Jordano Donor Plaza. Finally, the scoreboard is sponsored by Montecito Bank & Trust.

GIven the immense history of Santa Barbara High School and particularly SBHS’s athletic programs, it’s no surprise that many generations of alumni came to the first public event in the stadium. One attendee was particularly notable: Barbara Upton, the Girls Athletic Manager from the class of 1939. She described how in her day, girls’ sports were not taken as seriously, and they rarely got to play other schools. Given the progress for gender equality that has been made since then, getting to witness the dedication was a very moving event. ”I’m a critic,” she said, “but I’m very pleased. I think the new stadium is beautiful.”

While the stadium already played host to graduation ceremonies for the Class of 2020 and Class of 2021, as well as an interdepartmental performing arts showcase last Spring, this ribbon cutting marked the official start of a new era for Santa Barbara High School. With all students now back on campus full time, the stadium and conditioning center are put to good use by PE classes and a multitude of sports and was used for the Homecoming Pep Rally in September. Although this year is far from normal, the fanfare around this new stadium seems to reflect the general sense of optimism among students and staff. Camie Barnwell, Chief of District Communications, described the “excitement, joy, and gratitude” she felt that day. School Board President Kate Ford said that being able to be in the new stadium “reinforces the love for your high school and the pride in your high school.”