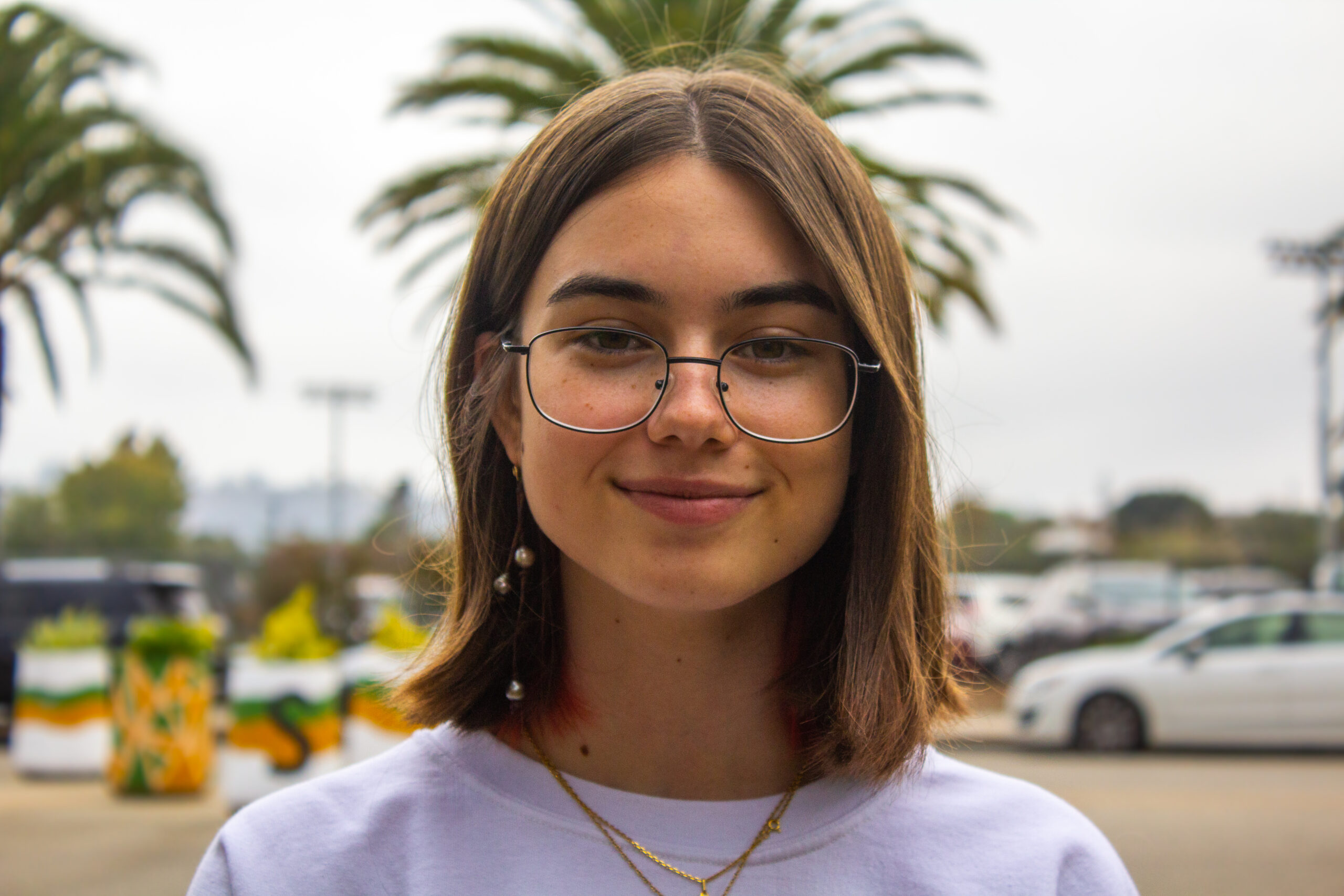 Artist of the Month: Alizee Lytle

Alizee Lytle is a talented young artist at Santa Barbara High School whose relationship with art is one of the most integral parts of her life. She is currently a senior in the Multimedia Arts and Design Academy at SBHS and has been involved in the program since her freshman year.

Alizee Lytle first became interested in creating when she had a passionate art teacher in elementary school. “We would do art projects all the time, and they encouraged us to be creative. That was a really good outlet for me to express myself when I was young.” This class is what first got her into drawing and painting fine art. However, when she later realized that she could use art as a tool for visualizing, she began to realize the importance of art in her life. Lytle explains that she has always had trouble visualizing things in her head. “When I close my eyes, it’s black. I don’t see anything.” However, when she began to draw, she put her thoughts into an illustration that she couldn’t create with her head. The first time she experimented with this was when she was reading the Percy Jackson series in junior high. She couldn’t see the characters of the story in her head, so she drew them on paper and created the world she had read about.

This visual block has followed her all the way through her artistic life and still to this day she will write and draw any of her ideas on paper as a way to work through her creative process. However, as time passed, Lytle realized that she preferred to transfer her ideas from paper to digital art programs. “I started off as a traditional artist, drawing on paper with pens. But what I found is that it was using up a lot of resources to just draw on paper. I go through tons of sketchbooks, and I’d have to buy new pens all the time. So it drove me to digital art, where I have my tablet and that’s all I need.” Although Lytle’s decision to change to digital art was motivated by her environmentally conscious heart, she also had another practical reason. Colors. “With an infinite amount of colors, I could draw whatever I wanted,” Lytle explains.

However, this transition to digital art was not easy; it completely changed her creative process. She began using the program Procreate about four or five years ago and it took her about a year and a half to become comfortable using it. Lytle explains that she is completely self taught in this area and the MAD Academy was the first time she had ever received a class on digital design. After this transition, she began to fall into a new rhythm with her creation.

First, Lytle gets her ideas when she is going about her day to day life and she will quickly write it down in her notes. Later, she will sit down and “flesh out” her idea, writing out colors she wants to use and other things she wants to add. After this, she will do her line art and then her coloring as well as shading, and at the very end she will add her finishing touches until she is satisfied.

Lytle shares these finished products on her instagram page @alilikaii. She also presents them to her friends at MAD and around school, as well as with her family. Some of these digital pieces can be seen here.

Although much of Lytle’s art career has been focused on digital and fine art inspired by her day to day life; Lytle’s new project that she is working on is an animated film provoked by a tough past year, and her losing her mom. “Inspiration to draw comes from when I’m feeling good, when I’m feeling okay. It differs from a lot of other people’s experience because they see art as an escape and things like that. And that’s great. It’s just not what I experience. This is actually what my film is about this year. It’s about how, when I experience hardship, I don’t have any motivation to create. I have a total creative block.” Lytle’s short film will animate and personify art as a being that was not there for her when she was going through a tough time. She will sit and have a conversation with the “Art” and ask, “Where were you? I couldn’t find you when I needed you.” This project is still in the works, but she will share it as soon as it is finished.

Despite art being an integral part of Alizee Lytle’s life, she does not see it forming into a career. She would love it if she could incorporate art somehow into her job, but Lytle will likely focus on a career in the field of science. “My mom had a website called coastalcare.org. Throughout my life, she really educated me on protecting the environment, and especially our coasts. So that’s something that I’m really passionate about.” Lytle continues to explain that, “It doesn’t feel like art itself, the way I do it right now in terms of illustrated art, it doesn’t feel fulfilling to me as a career. What feels fulfilling to me personally is pursuing what my mom was working on and was teaching me throughout my life.”

Although creating art may not be a career choice for Lytle, art and Alizee will always be intertwined during her journey through life. Her struggles with creation have always reflected the struggles and hardships she has faced during her lifetime; this relationship will follow her through every success, misfortune or day-to-day experience.