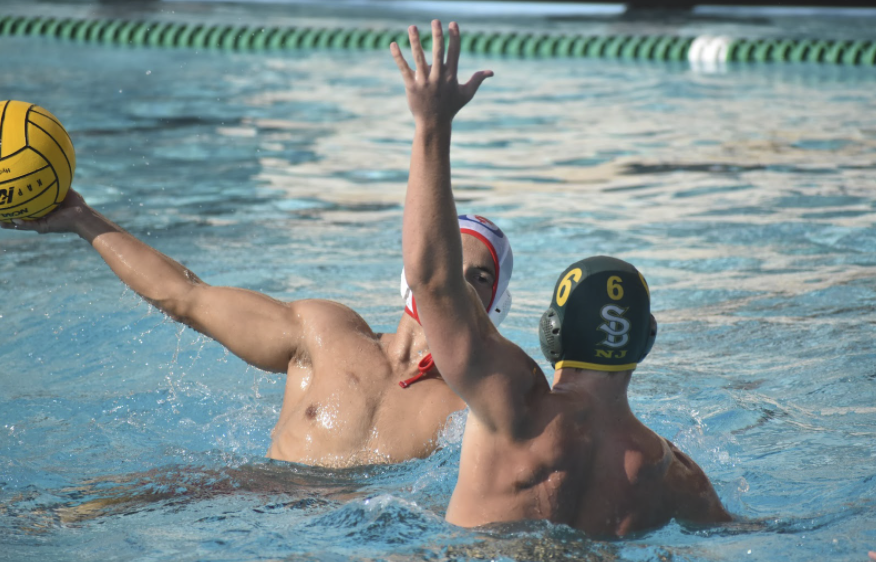 Less than halfway into the first quarter, SBHS racked up a stunning six point lead over SMHS. Coach Mark Walsh recalls, “That first period we were able to make some clean steals, and it made for some pretty good scoring opportunities.” Walsh describes their lead as comforting, knowing SBHS vs SMHS games result in close scores. Specifically, he says, “Jack Taylor made a really nice goal, so that added to our good start.” Pleased with the teams’ intensity and execution, Walsh says, “We were happy with how we were playing so we just wanted to keep it going.”

However, going into the second quarter, goalie Wyatt Pieretti was replaced by backup goalie, Jaxon Burford, due to an injured finger. Walsh says, “Wyatt’s one of the best goalies in the country, so to see him go out, we knew the competition would be excited and would be trying to shoot the ball whenever they got it.” At the start of the second quarter, SMHS did indeed score a series of three goals on Burford, but, Walsh says, “He settled down and made some good saves.” Additionally, SBHS had a series of misses, where Walsh says, “We didn’t do a good job of making some of our shots that we needed to.” Still, SBHS’s Sean O’Brien was able to make a single point – pushing it to a 7-4 game at halftime.

SBHS kicked off the third quarter with a single goal, followed by two more for SMHS, bringing it to an 8-6 match. However, this close score failed to last long against SBHS’s Ryan Drake, who came out swinging with a series of points. Walsh says, “Ryan scored a bunch of goals in the third quarter, and that helped us get up by a lot going into the fourth.” Another point for SBHS brought it to an 11-7 game, and seemed to confirm the teams’ success before entering the final period.

The combination of O’Brien and Drake truly solidified the Dons’ win in the last quarter. After another goal for SMHS and three more for SB, the Dons claimed victory over the Royals – finishing with a grand score of 14-8.

Overall, Walsh says, “It’s easier to focus on the ten minutes we didn’t play well, but, all in all, we need to focus on the twenty that we played really well, and be happy with the effort.” He credits Drake and O’Brien as the best offensive players of the game, and praised Burford’s adaptability to playing in place of Pieretti.

SBHS’s success against their rival was reassuring for their upcoming Harvard-Westlake tournament the upcoming weekend. Prior to attending, Coach Walsh excitedly anticipated the competition, saying “We’re going to have a tough, tough competition, but we are up for the challenge.”

Coach Walsh says, “We played well against the top teams in the nation for periods of time but were not able to put together a full game against some of the top teams.” Specifically, Walsh claims Nico McDonald had a strong performance during the end of the tournament. Keeping the future in mind, Walsh says, “These games are good preparation for CIF”, and hopes to keep the effort up over the next few weeks.