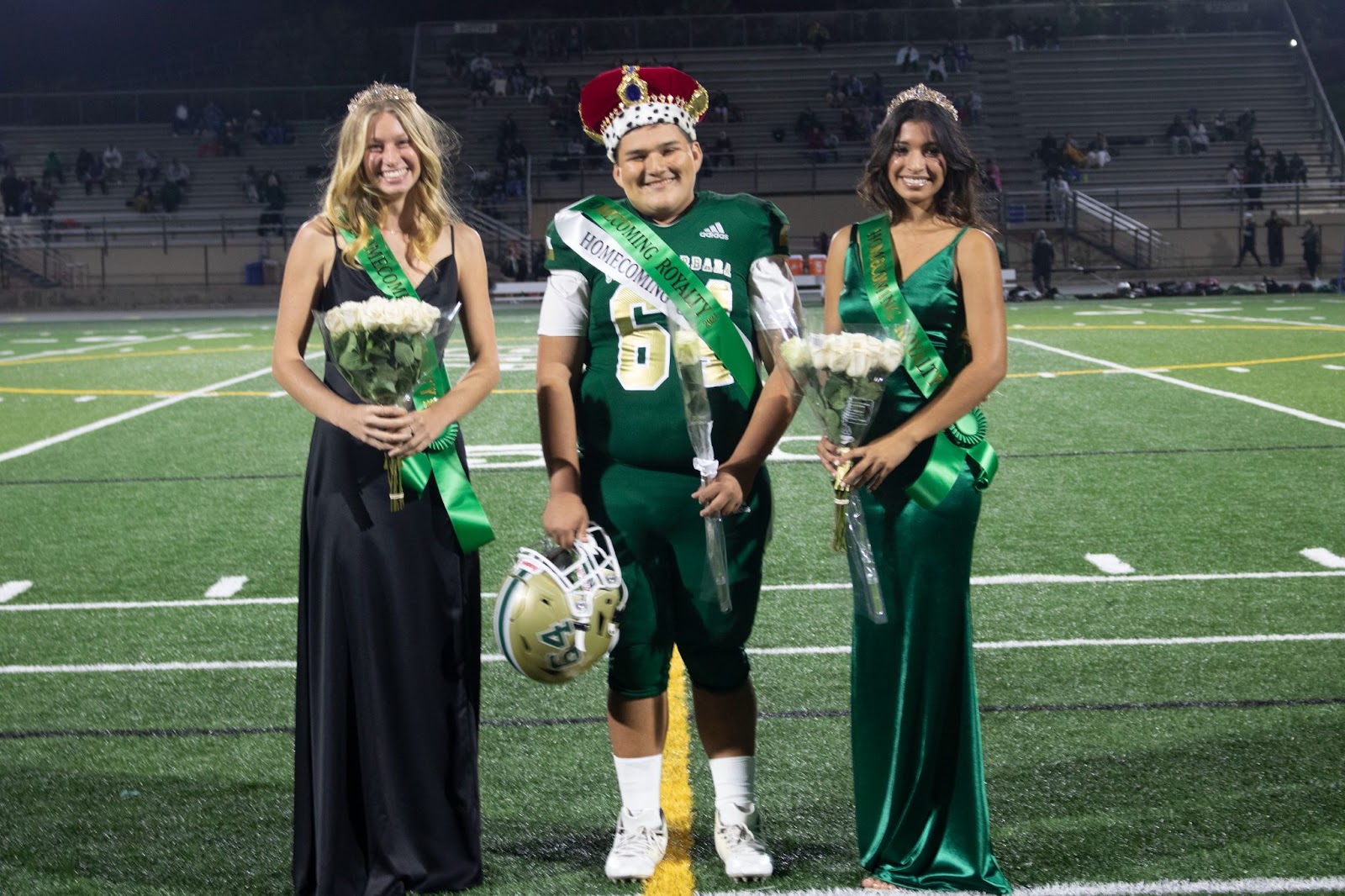 October 9th’s homecoming dance was a swinging success. Hundreds of students donned in cowboy hats and boots filled the dance floor and created a night to remember. The planning of this event wouldn’t have been possible without the tireless efforts of ASB and the SBHS administration. However many attendees participated in the dance, the true stars of the weekend were the homecoming court and royalty. These exceptional Dons were recognized at the homecoming game, where the royal court was crowned. The court could be spotted throughout the homecoming dance wearing vibrant white and olive green sashes. Featured below are excerpts from the senior assembly where each homecoming court/royalty member was introduced, courtesy of ASB.

Boz is a hard worker. He has been in the SBHS soccer program and a member of the National Honor Society since freshman year. He spends his summers working at a surf camp, and he also worked in the Sex Wax warehouse, so he probably made your wax at some point if you surf. He has been a dedicated member of Dons for Dons since junior year.

Lauren is an exemplary Don. She has been a part of SBHS’s volleyball program since freshman year and the girls soccer team. Lauren is a member of the National Honors Society, the MAD academy, and multiple non-profits on campus including Dons for Dons. She enjoys spending time with friends, skiing, hiking, being at the beach, and traveling.

Joel Flores is a model Don. His favorite subjects at school are lunch and dismissal. He enjoys being with his family and friends. As you all know he plays football, go #64!!

Lea Pynn has continuously shown her involvement and commitment at SBHS and the community. She has been in ASB for the past three years and is ASB treasurer. She has been playing soccer since she was three and has been in the girls soccer program at SBHS since her freshman year, while also being involved in club soccer. She has volunteered at Surf Happens and the Sea Center throughout her high school career. Her hobbies include going to the beach, working out, and spending time with friends and family. She enjoys going to concerts, her favorites including Outside Lands, Summer Roundup, Khalid, Halsey, and Shakira. Fun fact: she can also do the worm.

Diego is a third generation Don, he has played on the boys high school volleyball team since he was a freshman. In his free time, he loves hanging out with his friends and making new memories. He is a part of the National Honors Society and is a MAD student.  He loves being a Don and supporting the athletic teams at SBHS. He spends summers visiting his family in Mexico and playing beach volleyball.

Bridget DeVine is involved in our school in many different ways. She has been in six productions during her time in the  SBHS theatre program and is looking forward to her seventh production coming up this November. Along with theatre, Bridget has been involved in dance at SBHS, Dons Crew, Madrigals, ASB, and is your senior class vice president. Bridget’s passion is performing and she loves singing at local venues and events. When not at school, Bridget loves taking walks with her dog Winnie at Hendry’s Beach and spending time with her loved ones. As someone who has struggled with mental illness, she firmly believes in mental health advocacy and support as well as living a life guided by kindness and love. Bridget plans to attend a four-year college next fall to major in musical theatre and hopefully minor in marketing or hospitality.

Zinzan has spent his time at SBHS well. He has been a part of the National Honors Society during his high school career. He played water polo for three years and is now treasurer of Dons for Dons, a club on campus. He gives back to the community through volunteering at Direct Relief, a non-profit that works to help medical professionals with the resources they need to save lives. In his free time, he likes to surf, spend time with his family and hang out with his friends.

Ally is very involved in the Dons community. She is a MAD student, a member of Dons for Dons, and High Schoolers for the Homeless. She is a dancer trained in jazz, hip hop, ballet, contemporary and aerial. She is also a part of the National Honors Society. She enjoys volunteering and improving the community around her. In her free time, Ally likes to go on hikes, go to the beach, and spend time with friends and family. She hopes to go to a four year out-of-state university and study psychology and journalism as she furthers her educational path.

Halie has been a part of ASB for three years now and is your senior class president! She has been playing soccer since she was three, and played soccer and golf her freshman and sophomore year at SBHS. She has been volunteering for three years now for an organization called Youth Making Change, a youth-led organization that participates in organized philanthropy. She also is a part of the National Honors Society and the Student Site Council. In her free time she likes to go to the beach and hang out with friends. Halie hopes to attend a four year college majoring in psychology or sociology.

Outside of school Remy’s passions include dance and volleyball. During previous summers she would spend almost every day preparing for Fiestas, which she took part in for 14 years. After taking a break from dance she dedicated more time towards volleyball by joining 805 Beach Volleyball’s team. This past summer she played and competed in tournaments as well as helped younger kids strengthen their volleyball skills at the East Beach Volleyball Camp. Remy enjoys being outside and keeping busy, which includes a lot of beach time and being surrounded by both her friends and family. She hopes to attend a four year college after graduation, while majoring in business economics and minoring in entrepreneurship. Remy also hopes to travel to Spain and study abroad, with the addition of strengthening her Spanish which needs a lot of cleaning up.

Owen Rees has really stepped up this year with his involvement at Santa Barbara High School by becoming our new Commissioner of Pep and Rally and has been doing an amazing job. During the month of September, Owen was nominated as one of the Students of the Month at SBHS. He is also a member of the MAD academy and the National Honors Society. He no longer participates in any sports at SBHS but played lacrosse for two years and waterpolo for three years and continues to play rugby for a club team in SB. He works for the City of Santa Barbara as a beach lifeguard and is a busboy at a restaurant called Tre Lune. He enjoys the beach, skimboarding, hanging out with friends, his Prius, and tormenting Mrs. Greig.

Emma is a dedicated athlete: she has been on the SBHS varsity volleyball team since freshman year. She is committed to play beach volleyball at Cal Poly.  Emma is also a dedicated student with a weighted GPA of 4.6. She is a member of the National Honors Society. Emma has been the FCA leader since sophomore year.

-Paragraphs of information provided by ASB-