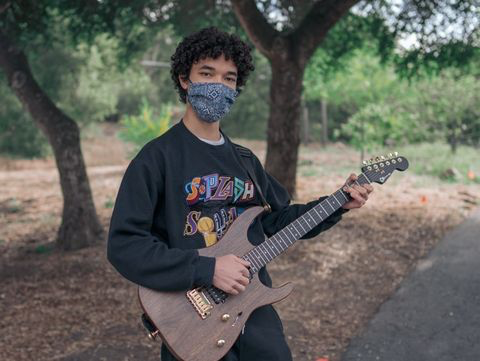 Artist of the Month: Seku Fujino-Harmachis

Seku Fujino-Harmachis is currently a senior entering his last semester at Santa Barbara High School, and he has always been passionate about music. When asked what first inspired him to get into music, Fujino-Harmachis said, “I think a lot of people I looked up to played guitar.” He explained that his childcare teacher, “Teacher Bob,” would sing him a song instead of giving time-outs. After a while of begging his parents to give him a guitar or a drum set, they finally gave in and gifted him a guitar when he was seven years old. Fujino-Harmachis said, “They gave me this crappy guitar—half size, super cheap, didn’t sound that good because they didn’t think I would stick with it. And then I played it everyday and they finally gave me an actually good guitar about a year later.”

“I was very passionate about it at the start, and I was going on YouTube, and learning on my own.” Fujino-Harmachis explains, “Then I got a private teacher. I really recommend getting private teachers because that really helps you progress and grow because they have been in your footsteps.” Later when he was around nine or ten, Fujino-Harmachis joined Notes for Notes, a local organization whose mission is to, “provide youth with music and production instruction that produces both positive social-emotional and creative growth.” Through Notes for Notes Fujino-Harmachis joined a band called “The Jazz Villains.” “That’s where I got most of my experience and learned how to be a professional musician. Like how to record,” he says. “This was for four or five years, from elementary to high school, sophomore year. We kind of broke up when the Coronavirus hit, but we played all around town. Our biggest gig was 2019 when we opened for the Steve Miller Band at the Lobero.”

This led to Seku Fujino-Harmachis’s current band, “Wombo Combo.” He explained, “Harry [Sneddon, bassist in Wombo Combo] was the only person that I was playing with over quarantine. Just in my backyard. When we were thinking, why don’t we just start a band? I said, I know a few people. So then I called up Angel [Martinez], who was also in ‘The Jazz Villains,’ got him keys. And then we wanted a singer. Angel was like, I know somebody. He calls up Kelly [Garnand]. And then Ethan Fossum is on drums and Julius Sherman is our temporary bassist. They are both from SBCC.”  Fujino-Harmachis added later that they have also been playing with Simon Blondell on tenor saxophone. When asked where the name “Wombo Combo” came from, Fujino-Harmachis laughed and said that he and Harry used to play Super Smash Bros in the band room at lunch and Angel, Harry, and he all decided on the name. The band plays mostly blues and jazz covers, though their pianist Angel Martinez is currently in the process of writing a few originals for the band.

“Wombo Combo” is not currently streaming on any platforms but you can follow them on their Instagram, @wombocombotheband for any updates on live performances they will be having in the future.

Meanwhile, Fujino-Harmachis has also been involved in SBHS’s Jazz “A” Band since his freshman year. He explains that it helps a lot with his ability to sight read music. He also says that he has friends in the class and it is a nice way to break up the day with some music. In addition to this, Fujino-Harmachis is also involved in the jazz band at SBCC called “Good Times.”

Fujino-Harmachis also taught entry level piano and drums to kids ages 12-17 over the summer and last semester. He taught them through his internship with The Turner Foundation, a nonprofit organization that helps underprivileged youth and community members by, “…creating innovative programs and services to empower our communities,” according to the official Turner Foundation mission statement. Seku also explained that The Turner Foundation had a partnership with AHA!, another local organization dedicated to helping youth. “We did a music thing with some of their kids and some of the kids at Turner foundation and we did entry level, guitar, bass, drums and piano, we formed like three or four bands. And then they all played a song and we recorded them.”

With Seku Fujino-Harmachis’s high school graduation right around the corner, he is beginning to look at future options. “After high school, I plan to go to a four year university to study music,” he says. “I am applying to USC, UCLA, NYU, and Berklee School of Music. I have auditioned for all of them except Berklee, which I will be doing later this month. I hope to pursue a music career in a bigger city while I study at a university. I’m hoping that a big city such as Los Angeles or New York will help me pursue my career, as it will have more opportunities than a small town. I’m not completely sure what I want my career to look like at the moment, but ideally I would like to be a performer or studio guitarist.”

In the meantime, Seku Fujino-Harmachis hopes to save up the money he receives from playing around town and spend time with his friends and family before he goes off to college to continue his endeavor into the world of music.