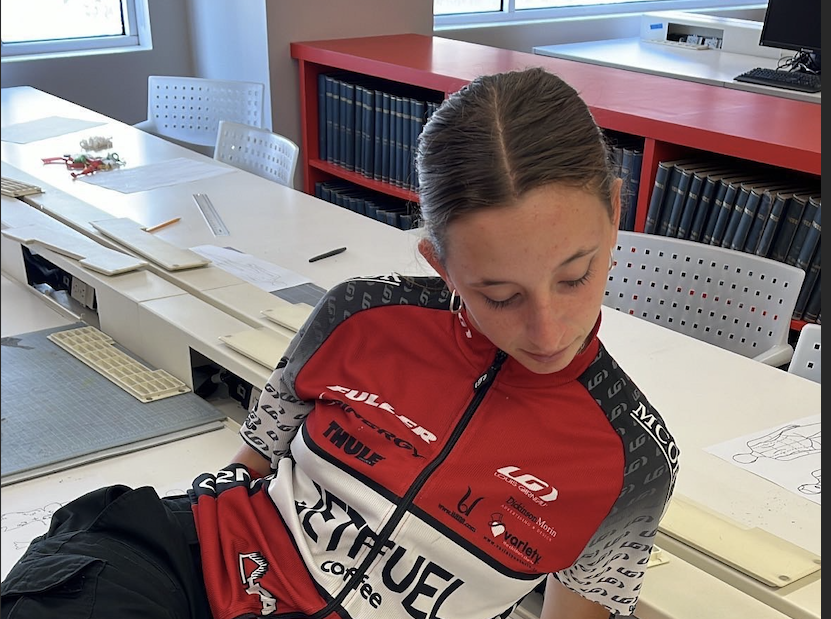 Artist of the Month: Gianna Stump

Gianna Stump is a senior at Santa Barbara High School with a strong passion for the art of fashion. Her passion will follow her to New York City, where she wants to study and turn her artistic image into a brand.

Ever since Gianna was younger, she would play dress up and make outfits for her sister. She would also sketch ‘farfetched and complex outfits’ that she hoped to wear one day. As time went on, she would practice sketching and her outfit ideas would become more tangible. Gianna credits her grandmother for teaching her to sew when she was four years old. When asked if there was anyone who helped her fully realize her passion she responded with, “There were a few, including my neighbor and family friend, Lisa, who helped me learn the basics of sewing. My mom gave me my first sewing machine, now she cheers me on in everything I’ve created since.” Gianna credits one of her main inspirations to be the late fashion designer Virgil Abloh who is known for accomplishments such as being the artistic director at Louis Vuitton and founder of Milan based fashion company, Off-White.

While Gianna has made countless pieces, when asked to name a favorite she responded with  “Segments is my favorite piece.”  She then explained, “ made from bamboo jersey knit, and consists of three sections that can be styled with different garments. The ability to wear Segments in various ways would prevent buyers from getting tired of the dress and throwing it out.”

Gianna’s brand includes themes such as conservation and environmentalism.

“Bamboo grows rapidly and absorbs five times more carbon than other plants, reducing the amount of greenhouse gasses in the atmosphere. This garment can be composted at the end of its life.”

When asked what other fashion items have personal meaning to her, she replied, “I created Contaminated by weaving recycled plastic bags. This project made me feel pleased that I could extract waste to create something meaningful, but also disappointed that our country has continuously decided to ignore the consequences of global warming. As I weaved the plastic bags, I thought about hundreds of billions of other plastic bags sitting in landfills and polluting our lands and oceans. I was also reminded of the many ways in which we can reverse our actions to preserve our Earth.” According to the EPA, in 2010 there was an estimated 4.8-12.7 million tons of plastic waste in various parts of the marine ecosystem. Gianna’s Contaminated is a reflection of the horrors that follow rapid human waste as well as the dangers of climate change and the lack of response to it. Another piece that holds personal meaning to her is titled “Hidden Figures.”

“I created a hoodie, called “Hidden Figures,” for my loving partner who is my number one supporter. Hidden Figures was selected for the Glass Castle Runway show on April 9, 2022. This event is funded annually by Emory University in Atlanta, Georgia. I created it using organic cotton and recycled denim sourced within the U.S. This product supports local farmers, avoids toxic dyes, and can be composted at the end of its life. This keeps our wildlife safe and prevents waste from entering landfills.”
When asked what advice she would give  other aspiring fashion designers, Gianna said, “As a new designer, making a strong and accurate reputation for yourself and your brand should be one of your top priorities.” This can be done by posting consistently on social media and with progress photos, pop-up announcements, or anything of that nature. I would also suggest reaching out to local businesses or small celebrities specifically within your niche or target audience.” Since October of 2020, Gianna has run a blog known as “Fashion by Joan” which updates with posts every week. With a genuine drive for her passion it’s safe to say that Gianna is going to achieve great success. Visit https://fashionbyjoan.wordpress.com/ to learn more.