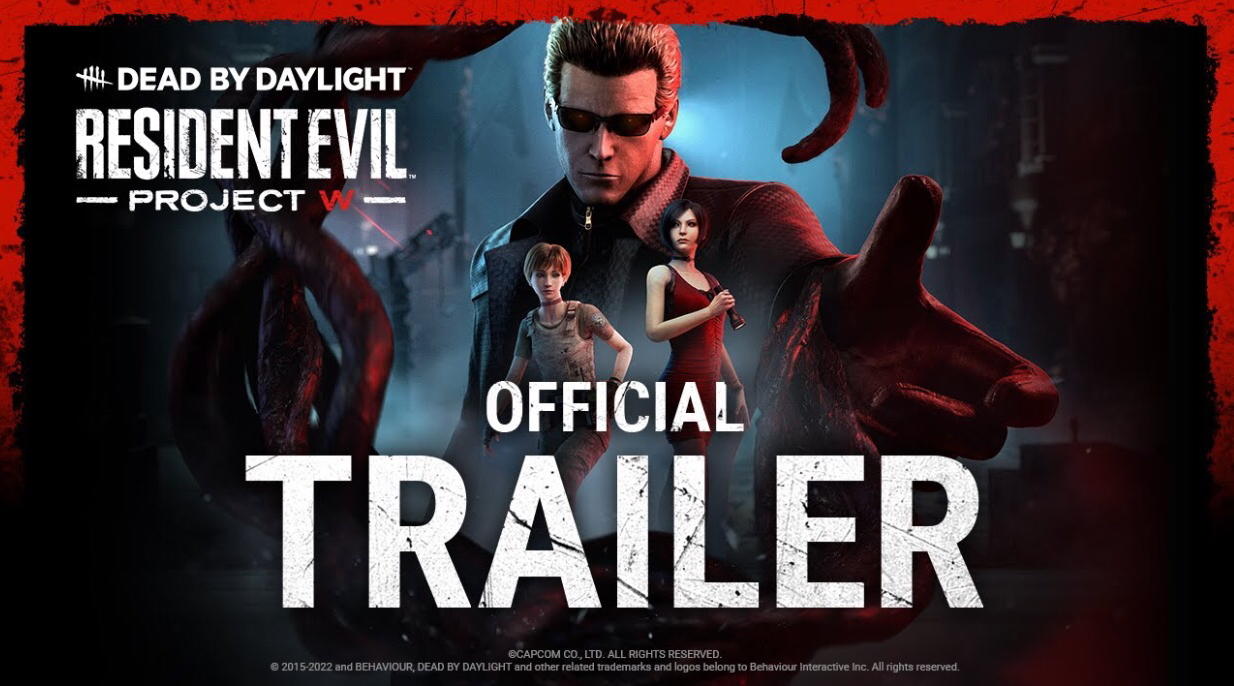 A new DLC (downloadable content) has been released for the hit asymmetrical horror game Dead By Daylight, Resident Evil Project W. It comes with one killer Albert Wesker, also known as The Mastermind and two new survivors, Ada Wong and Rebecca Chambers.

Let’s talk about the new killer, the Mastermind. His new unique power, Virulent Bound, is an ability the Mastermind can use to barrel forward, infecting survivors with the Uroboros virus or leaping over obstacles. Press and hold the power button to charge a bound attack. While charging, the Mastermind moves slightly slower as he prepares his strike. When charged press the attack button to bound. If the Mastermind hits a survivor, that survivor becomes infected and if they’re already infected it increases the survivor’s infection. Should the Mastermind crash into something during his bound, he will slam the survivor, causing damage; if not, the survivor is thrown, losing a health state if they are thrown into any solid object.

Next up, Wesker comes with three new teachable perks, starting with Superior Anatomy: Decades of research have culminated in you: something faster, stronger and more dangerous than any human. When a survivor performs a fast vault within 8 meters of you, this perk activates. The next time you vault a window your vaulting speed is increased by 40%. This perk has a 30-second cooldown. Next we have Awakened Awareness: Your genes have been altered to heighten your senses in intense situations. When carrying a survivor, you can see the aura of other survivors within 20 meters of your position. Finally we have the perk Terminus: You are a brilliant tactician who prepares for every eventuality. When exit gates are powered, this perk activates. While Terminus is active, injured, downed and hooked survivors are inflicted with the broken status effect (the broken status effect prevents survivors from being healed) until the gates are open. When exit gates are open, survivors will stay broken for an additional 30 seconds.

To oppose Wesker two new survivors come with the Resident Evil Project W DLC. Ada Wong and Rebecca Chambers are now in Dead by Daylight and they come with their very own teachable perks, that being Better Than New, Hyperfocus and Reassurance for Rebecca and Low Profile, Wiretap and Reactive Healing for Ada Wong. Starting with Rebecca’s perks we have Better Than New: You are an expert in combat medicine. Patients leave your care reinvigorated. Upon completing a healing action on another survivor, they benefit from the following effects until they take damage: Increases their action speed in healing, unhooking, cleansing and blessing by 16%. Next up is the perk Reassurance: Your presence helps allies focus, assuring the panic associated with extreme conditions. When within 6 meters of a hooked survivor, press the active ability  button to halt their sacrifice process for the next 30 seconds. Reassurance can only be used once per hook instance. To finish off Rebecca’s perks we have Hyperfocus: You throw yourself entirely into your tasks and find ways to be more efficient than anyone else. After hitting a great skill check while repairing a generator or healing, Hyperfocus gains 1 token, up to a maximum of 6 tokens. For each token, the following stack-able effects are applied: increases the skill check odds by +4% per token. Increase the skill check rotation speed by +4% per token. Increases the skill check bonus progression by 30% of its base value per token. Hyperfocus loses all tokens when succeeding a good skill check, failing a skill check, or if the action is interrupted by any means.

Now onto Ada Wong’s perks, the first being Wiretap: You know that the best way to stay one step ahead is to keep tabs on the competition. After repairing a generator for a total of 33%, Wiretap activates: After repairing a generator for 3 seconds, press the active ability button to install a Wiretap for 80 seconds. The auras of tapped generators are revealed to all survivors in yellow. When the killer comes within 14 meters of a tapped generator, their aura is revealed to all survivors. Damaging the generator destroys the Wiretap. Next up we have Reactive Healing: the more a situation becomes compromised, the more determined you become to complete the operation. When another survivor loses a health state within 32 meters of your location while you are in the injured state, you benefit from the following effect: Grants 50% of your missing healing progression. Finally we have the perk Low Profile: You work best alone. When it’s just you and your pursuer, you know how to disappear. Whenever you are the only survivor in the trial currently not in the dying state, hooked, or already dead, Low Profile activates: Suppresses your pools of blood, scratch marks and grunts of pain for 90 seconds.

Resident Evil Project W DLC was released on August 30th and has been extremely fun as well as faithful to the source material. Any fan of Resident Evil will love this DLC and the additional skins and content that has been released with it. I would give this DLC a 10 out of 10 and has been one of the best DLC for Dead by Daylight of all time.