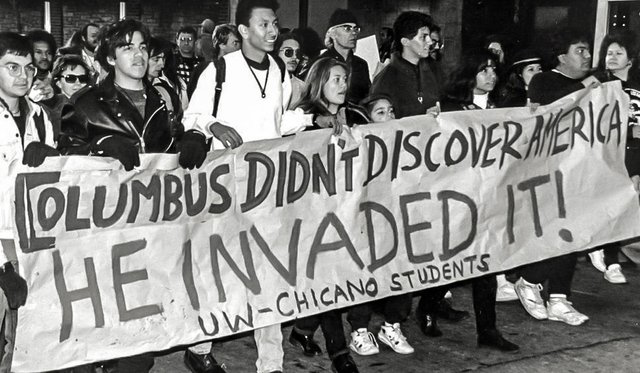 Columbus Was No Hero

America has a dark history of racism and oppression lurking in its shadows. Time and time again, America has tried to ignore this ominous shadow, and pretend that it doesn’t exist. Is this out of shame or ignorance? Racism is deeply rooted in American politics, economics, and the justice system. The history of slavery is pushed aside as something of the past, but in reality African Americans are still suffering from its ripples. Men of color make up the largest population of inmates and have statistically been shown to get harsher sentences than white men and women. America was built to bring liberty and freedom to white men, and it still continues to do so. Indigenous populations continue to live in poverty and their communities are plagued with addiction. The national holiday, Columbus Day, celebrates the “discovery” of America by a white man. The fact that their land was stolen when Christopher Columbus stepped foot on North American soil is simply pushed aside as the progress of men. This dark ever looming shadow of American history is simply glossed over and is often mistaken as a stepping stone to the success of a nation.

Columbus Day has a lot of controversy surrounding it, but where did this holiday originate?  Christopher Columbus was an Italian explorer and navigator. He stumbled upon North America in 1492, while trying to find an alternate route to India. He has since been credited for discovering America. Most people now know that this statement is untrue; as indigenous people had been living there for hundreds of years before he arrived. Additionally, he was not even the first European to come to America. Because of Columbus’ “monumental discovery”, America decided to commemorate the day Columbus came to America by declaring the second Thursday of October a national holiday, Columbus Day. This holiday was heavily pushed by italian-american business owners. It was unofficially celebrated in a number of cities as early as the 18th century. It began to be federally celebrated in 1937 by President Roosevelt.

To further clarify, Christopher Columbus didn’t discover America. Indigenous people lived in North America long before Christopher Columbus stepped foot on Carribean soil. The effects of Columbus’ voyage on natives was detrimental and catastrophic. Columbus did not intend to bring diseases across the pond, but he did, and these diseases killed off a vast majority of the native population. The diseases were not the only problem; he also took slaves for display back home and to work in his conquered lands. Indigenous people still feel strongly about this day; many feel that this day celebrates imperialism, racism, and genocide. The undeserved acknowledgement given to Columbus fuels the retro progressive message that it is acceptable for America to invalidate an entire population’s existence, unless a white man is involved.

America does not confront its dark history with remorse, or as a learning lesson, but instead tries to manipulate it and contort it to become an image of progress. Some Americans associate Columbus Day with the “American dream”. They see this day as a reminder of the ideals the nation was built on, equal opportunity, and the pursuit of liberty and freedom for every American. Some also feel the same about the Confederate statues that scatter the nation, particularly the south. Their meaning has been changed in the eyes of the general public from a symbol of nationalism and American ideals, to a symbol of America’s racist history. The statues purpose is to remain standing to remind America of its shameful history – and that white America used to celebrate the suffering of minorities, particularly African Americans. Is this the purpose of Columbus Day?  Other nations, such as Germany, choose to acknowledge their history is also dark and inhumane; they choose to confront the holocaust with penance and compassion. It is not hidden from visitors and residents. The names of every person that could possibly be found whose lives were ended due to the holocaust have been given memorials and rocks or torches displaying their names. Germany does not try to hide the genocide that took place on their soil, so why do we?

Many cities and states around the nation are not as ignorant to the reality of colonization of the Native people of the Americas.  States such as Vermont, Maine, Oregon, Minnesota, and Alaska officially recognize Columbus Day as Indigenous Peoples Day. Dozens of US cities, including San Francisco and Cincinnati, decided to stop observing Columbus Day and will instead celebrate Indigenous People’s Day.

Does Columbus Day remain because it’s a difficult reminder of America’s dark history? Or does it remain as a symbol of the true underlying values of this country; white supremacy and ignorance.