What Happened to Bossie The Cow?

New Dons may wonder who Bossie The Cow was. She was the cow statue who lived on top of the Live Oak property on Milpas now known as Bossie’s Kitchen. She was around 80 years old and was put there in the 1930’s. She fell off her pedestal and landed on her side causing her to break in many pieces. Many people were upset to hear this. It’s still not known if it was done purposely or if it was just a tragedy. Although, this wouldn’t be the first time she may have been vandalized. In 1971 Bossie’s head was taken off with a ripsaw, but thankfully she was able to be fixed. She was later put back up on the roof after she was repaired. 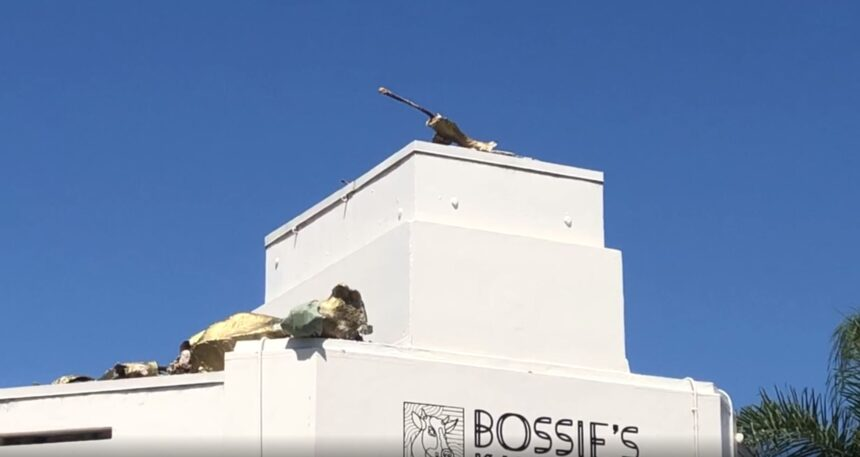 She was put there when Bossie’s kitchen was called Live Oak in the 1930’s. They kept her there when the building was taken over by McConell’s Ice Cream. McConnell’s was there in the 1960’s. Bossie was known for being there as a symbol of McConnel’s Ice Cream.  Over time she became a landmark and an SBHS senior tradition.

Around 50 years ago, Santa Barbara High School seniors made it a tradition to paint Bossie. During football season when it was the famous rival week between Santa Barbara High School and San Marcos High School, San Marcos would sometimes go onto the roof and paint half or most of the cow their colors. Every year around this time, people looked forward to seeing how Bossie would look. Many people think she was pushed over or was simply so old that she fell over. Based off of the picture it could be a possibility that she was pushed over. In the picture her legs are tipped over as well, and if she fell over, her feet would most likely still be on there. If someone pushed her they would be able to lift from the bottom causing her to actually fall all the way over, unlike if she just fell over because she wouldn’t be heavy enough for her feet to come out of the roof.

Lastly, I hope many of you have found interest in reading this article about Bossie The Cow. If you can please try to donate to the go fund me as any amount of money can help. She will always be known as a Santa Barbara landmark and will hopefully get put back up soon!

Published in Fall 2020 and Community