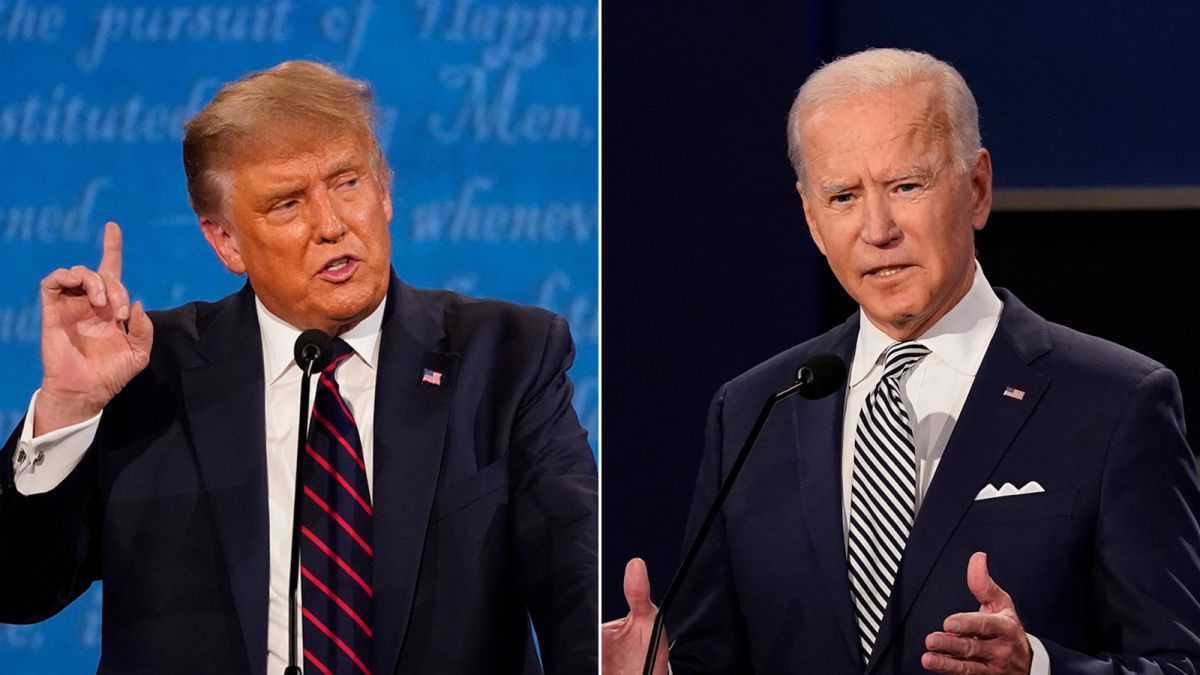 I hope many of you tuned in last Tuesday for the first Presidential debate between President Donald Trump and former Vice President Joe Biden. If you didn’t happen to catch the dumpster fire that was that debate, here’s the rundown. SNL couldn’t have put together a better skit, but unfortunately, this is reality.  The night was filled with interruptions, targeted remarks, and President Donald Trump arguing with the moderator.

The night began with the moderator Chris Wallace asking Donald Trump about his controversial decision to nominate Amy Coney Barrett to succeed Ruth Bader Ginsburg. Biden responded by saying,  “American people should have a say”. Biden brought up Trump’s affordable care act, stripping 20 million people of health insurance, and claimed Trump knew she has written that she supports this act, and taking away women’s right to reproductive healthcare. This conversation then moved into healthcare where Biden states he supports the expansion of Obama care, and people would still be able to have private insurance under his proposal. Trump interrupted Biden before he could say much more on this topic by stating “your party wants to go socialist medicine”, to which Biden refuted stating, “I am the democratic party”. Trump then went on to say “I’m cutting drug prices… which no president has had the courage to do”, and “I’m getting insulin for so cheap it’s like water”. After this statement, you could hear a scoff from VP Joe Biden.

The next topic was the current COVID-19 pandemic. Trump stated, “it’s China’s fault, it should’ve never happened”. He then made ambiguous claims about not knowing the real numbers of people that have died around the world. He then went on to tell Biden he could never have done the job the Trump administration did. In response, Biden looks directly in the camera and asks the American citizens if they have an empty chair at their table of a lost family member as a result of COVID. While Biden attempts to appeal to the emotions of the American people, Trump again interrupted saying “you would’ve lost a lot more people… far more people, would’ve been much later”. Trump also falsely claimed that a vaccine was coming soon when in reality a vaccine is not likely until late march or the end of 2021.

The following segment pertained to the economic recovery plan following the pandemic. Trump accused Biden of wanting to close down the country and staging that the democratic states shut down to remain closed until after the election. Biden then brought up Trump’s recently released tax documents; which showed Trump paying 750 in federal taxes in both 2016 and 2017, to which Trump quickly interjected. The moderator had to remind the president that he agreed to two minutes each. Biden brought up the inability to open schools safely because of high costs, and the Trump administration’s pullback on their claim to provide masks for all students because it is “not a national emergency”. To exemplify the importance of opening up the country he stated new york is “so sad, it’s like a ghost town”.

Trump went on to claim he has paid millions in federal income taxes, which has been fact-checked as untrue (a whole other article within itself). Biden interrupted him by repeatedly stating, “show us your tax returns”. Biden says he will eliminate Trumps” tax cuts. To this Trump interrupted again saying, “but why didn’t you do it over the last 25 years!”, to which Biden responded with “because you weren’t president screwing things up”, while they continued talking over each other, Biden went on to say “you are the worst president America has ever had, come on”.  Trump rebutted, “I’ve done more in 47 months than you have in 47 years, doing things you never even thought of, including fixing the broken military you gave me”.

The debate moved over to the topic of tax policy. Wallace brought up the fact that in Obama’s final 3 years as president he created 1.5 million more jobs than Trump has in his first three. To which Trump responded, “they had the slowest recovery since 1929, also they took over something that was down here (puts hand down to waist) all they had to do was turn the lights on”. He then directed Biden stating “if you ever became President with your ideas To terminate my tax, You’ll lose half the companies that have poured in here. Biden rebutted ”we handed him a booming economy, and he blew it… Even before COVID-19 manufacturing went in the hole”.

They also discussed race relations in America or at least tried to.  Trump discusses the 1994 Crime bill, and its effects on the African American community specifically. In this document people of color are described as “super-predators”, but not by Biden himself. Trump says “you have treated the African American community, the black community,  about as bad as anyone in this country”. Trump then went on to claim he has the support of almost every law enforcement group in the United States and named places on his fingers mentioning the sheriff of Portland, who live-tweeted “I have never supported Donald Trump and will never support him”. Trump stated “we believe in law and order, Joe you don’t”, he also stated that Biden is unable to say law and order in fear of losing his radical left supporters, who trump also says is the biggest threat to America, specifically Antifa (which he commonly mistakes for a group rather than an ideology). Biden went on to recognize systemic injustices within education, work, and law enforcement. However, he follows this up by saying that “the vast majority of police officers are good decent honorable men and women, but there are some bad apples… they have to be held accountable. He shared his plan to “call together an entire group of people to the white house from civil rights groups to the police officers to work this out”.

Finally, Wallace asked, “why should you be elected?”. Trump said, “there has never been an administration or president that has done more than I have done in a period of three and a half years, despite the impeachment hoax”. He then went on to claim the greatest economy in history and lowest unemployment rates in history under his administration before COVID and “unity was going to happen”. He says he will fix the military and VA that Trump says was a “mess’ under him (Biden)”. Biden responded to the question “why should you be elected over President Trump?”, to which he said,  “Under this president, we have become weaker, sicker, poorer, more divided, and more violent”. In regards to weakness, he says he is not weak unlike Trump who is “Putin’s puppy”. Trump again interrupts, but this time bringing up Biden’s sons. One of Biden’s sons died tragically, the other has a history of substance abuse. This was an unpresidential blow on Trump’s part, no matter the party, anyone could see this. Biden was quick to defend his son saying, “I’m proud of my son”.

This debate is said to be “The worst Presidential debate in American history” (The New Yorker). The evidence of this claim is clear. I along with the rest of the country learned virtually nothing about their plans for the presidency and their standpoints on some of the most pressing issues affecting America today.