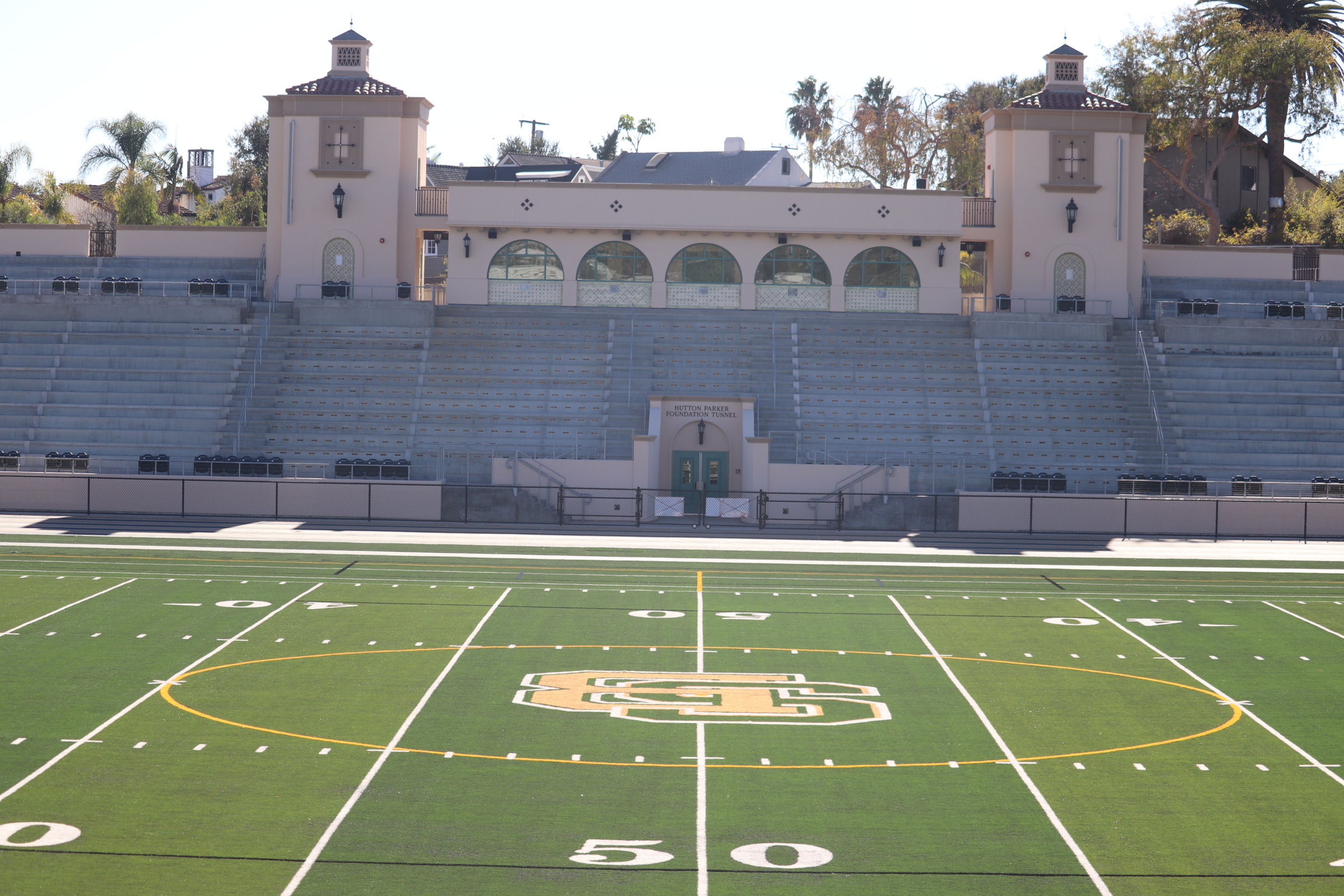 Santa Barbara High School has recently finished the new and improved Peabody Stadium. It has been over ninety years since the old Peabody Stadium was built. Many improvements have been made for certain future events. Plus, there is more to come as ideas build up over time. Overall, not only have high school students and alumni from Santa Barbara anticipated this, but all of Santa Barbara is very excited to create new memories for the first generations to ever be in the new Peabody Stadium.

“A swamp and was uneven”, is how Principal Dr. Simmons would describe the old stadium when she was in high school years ago. Dr. Simmons attended South Pasadena High School when she played soccer, here at the old Peabody Stadium during the CIF playoffs. When she played here, it was raining which made the field even worse than it was, so she didn’t c have the best experience. She even asked herself, “This is really Santa Barbara, I thought it was supposed to be beautiful up here!”

The old Peabody Stadium was still up and running and good for use. Until multiple complaints started piling up about the stadium’s durability, and how in some cases, “it felt unsafe”. Not only were there complaints from the community but visiting opponents and their close community. As stated by Dr. Simmons, “constant complaints were about the bathrooms backing up, trash was almost everywhere and not being picked up, and visitors were upset because they couldn’t see the scoreboard”. Overall the stadium was very old and not high quality like other high schools in the country. It  was worn down  to the point of it being unsafe for the community. The old stadium had pillars, “the pillars were made out of stone, and there was an inspector that came to see if the stadium was still good to run with. But as they were checking everything out, they checked the pillars and when the inspector started knocking on the pillar it started to crack because of how old it was”, quoted Dr. Simmons. As more complaints and bad news started adding up, it was a sign that there needed to be many changes. And by many, they meant, “everything existent in the stadium”. The field was torn up, the track was concrete and cracked on every inch , the bleachers on the home side were breaking apart slowly, bathrooms were backed up multiple times, and the stadium was slowly coming to its end. The old Peabody Stadium was built in 1924, and after ninety years the community of Santa Barbara came together to make the renovations of the stadium possible for future Dons and the community at large.

Since the dreams and hopes for the stadium have been accomplished, it did take around three years to finish. Even though the Santa Barbara High School has received a true gift, the construction and building took a lot longer than expected. “Frustration, and what I felt was very slow work”, is how Dr. Simmons would describe the long process of the stadium being built. The stadium was originally planned to be finished by the summer of 2019. Unfortunately, that wasn’t the case, nor was it done around the time it was supposed to be finished as we know. There are many key factors on why the stadium was on stall for quite some time.

Bad weather, such as rain, is one of the many factors why the stadium was taking a very long time to build. At the time they were digging up the ground for the foundation of the turf, and since it would rain heavily, the stadium would eventually flood, and wouldn’t dry for days which led to countless delays. As stated by Dr. Simmons, “If it was rainy one day, that would then lead to three days of no work.” During the spring when they were constructing, it at least would rain one or two times a week which led to bigger delays. Which meant the building of the new stadium wasn’t on track for its finishing debut.

While constructing, there was a big scare that was never known until they reached it. One small drainage pipe was found underneath the field that served to drain the entire Riviera behind Santa Barbara High School. Since it was very old, they decided to take the drainage pipe out because they were worried that it may leak, or back up, or even break which would lead to multiple problems underneath the stadium. Taking the drainage pipe out would take a couple of months considering how big it was, and ultimately led to another delay on the new stadium.

This year, COVID-19 has had a major impact on not only our community, but across the world. In our community, it’s affected the way things are running like restaurants, stores, and certain venues that are unfortunately limited. For one, the construction of Peabody Stadium was delayed because of COVID-19. Many construction workers weren’t working at an urgent pace because they knew track and graduation weren’t going to happen for the year of the class of 2020. Since COVID-19 has not yet stopped spreading, there will be many cautions and limitations when it comes to certain activities in the new stadium.

The new stadium’s home side has a total capacity of 2,284 people, while the visitor’s side has a total of 1200 people. Since we are unfortunately in this pandemic situation still, there will be a limited capacity depending on the tier our town is in. For example, if we are in the red tier, there will be a capacity of only 25% in the stadium. How will they do it? They will be sure family members of their child are playing in an event first, and other community members last if they have enough capacity allowed. If we were in the purple tier, which we are in right now, no fans will be allowed in the stadium whatsoever.

Although there have been many worries about the stadium, there are some great improvements that have been made. New high-quality turf has been put down, and a great thing about the turf is you don’t have to worry about taking care of it all year long, such as grass. A new track has also been put down along with it, and the tracks that have been placed are called, “mondo track” This material is what they use in the Olympics for track and field which is very high in quality. We are one of the many high schools in California that uses this type of material. To add to that, many things go along with the track. They’ve placed a shot put, the long jump, and the high jump. Santa Barbara high school doesn’t host competitions for track and field, even in the old stadium because of how old it was. But now that they have all the competitions built, it will be very exciting for the track and field program, and will possibly catch people’s eye if they’re interested in joining which is a very big deal for the school. The reason why it’s a very big deal is because the track and field program gets the chance to compete in their new stadium. Rather than competing at Santa Barbara City College or San Marcos.

Bathrooms have also been fixed which are located underneath the stadium, like the old one. A new press box has also been added in the stands of the home side. The press box consists of rooms for commentators, commenting games, and coordinators in football games. Last but not least a new scoreboard has been placed. This time both the home and visiting sides can see the scoreboard, nice and clear.

The new Peabody Stadium is truly a blessing not only for the Santa Barbara community but most importantly the athletes and students that get to have a chance to have a ton of fun in what they love to do in the new stadium. Whether it’s a sport they are competing in or cheering on for their fellow Dons as they represent the Olive and Gold. There is very much to look forward to for this new era and the first generations to ever step foot in this stadium. The Friday night lights, record-breaking stats that’ll make history, and the Dons walk at graduation, which is a never-ending tradition as a Santa Barbara Don. Much excitement is building up, as the new Peabody stadium not only awaits the future Dons but the history that will go down forever.