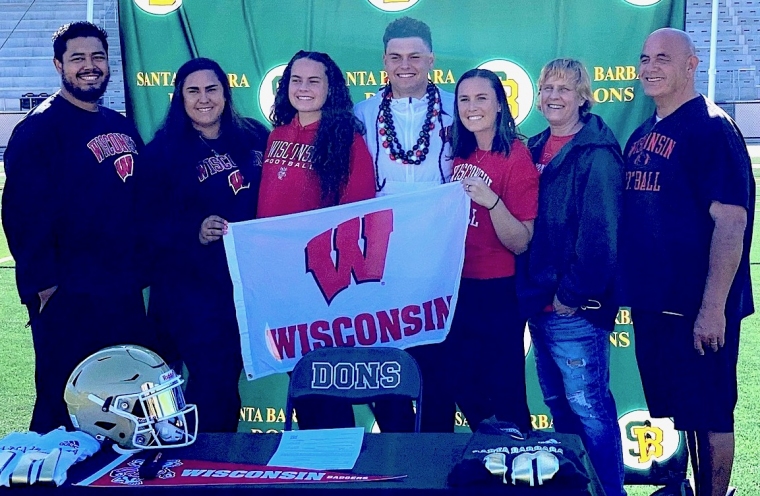 On December 16th, four-star football prospect and Santa Barbara native, Deacon Hill, officially signed his letter of intent to the University of Wisconsin at our very own Santa Barbara High School football stadium, also known as Peabody Stadium, which was just recently renovated and finished for use, and the stadium has been used for both practices and student/staff ceremonies such as signing days. This was a very big accomplishment for Hill, as he has always had a dream of becoming a professional football player, and signing to a Division 1 college such as Wisconsin can be Hill’s big break for fame.

Deacon Hill has shown to be a true threat to opposing teams over the years and has marked his name as one of the best college football players to come through Santa Barbara High School, like last season, he led the Dons varsity football team to an undefeated Channel League season, and then to the CIF Division 8 championship game, and was one pass away from victory, but was intercepted, giving their opponent (Sunny Hills) the win. Little did this affect Hill’s talent in any way, as he proved to be a real menace against other teams, being strong in both his throwing power and his ability to scramble and be a true playmaker outside the pocket.

Word got out that there was a 6’4”, 225-pound strong quarterback that could move and playmaker both inside and outside the pocket, and it caught Wisconsin’s football program’s eye. They offered Hill an opportunity to work out with them at the University of Wisconsin, which went notably well for both Hill and the Wisconsin football program, as they both hit it off, and they were very pleased with what they saw in Hill.

Due to Hill’s frequent encounters and connection with the Badgers, there was almost no doubt that Hill would decide on any other college. Because of this, Deacon Hill showed up to his signing Ceremony in all Wisconsin gear with his family, as usually in signing ceremony talented athletes decide on which school they will go to with hats in front of them, each representing a different college, but not with Hill. He had already been very close with the Wisconsin football program and knew he wanted to sign with the Badgers a while before he officially signed with them as Wisconsin has been scouting Deacon since his Sophomore year in fact.

Hill, like most athletes at this time, is hoping to have a football season, as he wants to get more experience before he goes onto the next level (college). But due to the COVID-19 virus, times are not looking the best, but there is still hope for the Dons to have a season if cases of the virus dramatically subside. However, for now, we wish Deacon Hill the best of luck in the rest of his career and hope to see him on the big screen one day!