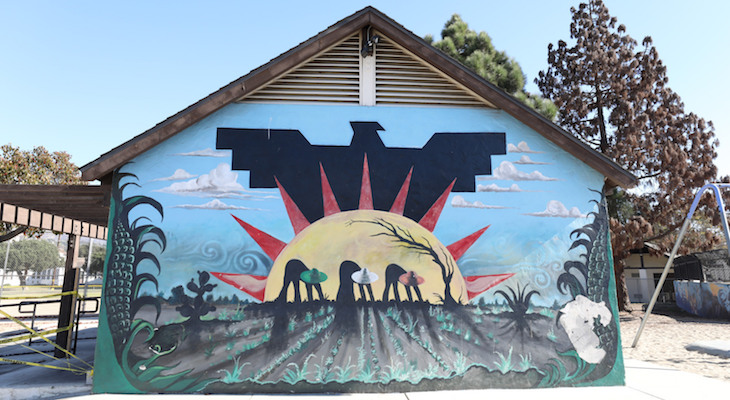 For the past six months, the city of Santa Barbara has been planning on renovating Ortega Park. The redesign will feature new pools, soccer fields, a skatepark, playgrounds, a community plaza, and a brand new basketball court with other features. Ortega Park has been around for nearly 91 years, first starting back in the 1930’s. Many things have changed over the years for this park and for the community all around. Today there’s soccer fields, one softball field, a basketball court, and swimming pools. Although there are many fantastic features to this park, there’s one in particular that is the most noticeable: the murals. There are a total of eight murals in the park which contain histories of the cultural backgrounds of Mexico and depictions of sports. Many say these murals are “the highlight” of the park. Although they are the highlight of Ortega Park, there has been a lot of commotion as to whether the murals will be taken down because of the new renovation plans. The director and organizer for these murals at Ortega Park is the well known Santa Barbara artist, Manuel Unzueta. It has been a back and forth argument on whether or not to keep the murals up, considering not only the hard work it took to get them done, but the true meanings behind them that should never be forgotten. Manuel Unzueta, the creator of the murals, is not giving up yet and will keep fighting for the future generations to see.

Manuel Unzueta was born and raised in Juarez, Mexico and moved to Santa Barbara when he was only six years old. He participated in many things as a child, and always wanted to be involved in trying something new, such as sports and music. Over time, Manuel discovered that art was his true passion. “I knew I felt it, I really felt it in my heart”, Unzueta says. “I chose art because people gave me respect, and people gave me a chance to be somebody,” said Unzueta. As his steps in life continued, he continued art and never stopped or settled with it. He graduated from Santa Barbara High School in 1968 and stayed close to home, attending Santa Barbara City College. He then moved on to the University of California at Santa Barbara where he received his Masters in Fine Arts. Manuel Unzueta then went to places that he never thought he would go. He started painting murals, mainly on the West Coast, for some time. He’s created a total of 52 murals across different states. They can be found at the University of Iowa, Mexico, El Paso, Texas, New Mexico, and Los Angeles. Eventually, Manuel ended up making his way back up to Santa Barbara after painting murals in Puerto Vallarta, Mexico. He was then asked to paint several murals at Ortega Park with a couple of other muralists also from Puerto Vallarta. Starting in the summer of 1979, the murals were created to illuminate the park’s dark atmosphere.

In the summer of 1980, the murals of Ortega Park were finally finished. Three of the murals are located on the walls of the bathroom and near the swimming pool. The majority of the murals in the park contain the background and culture of Mexico. A famous mural created collectively, directed by Manuel Unzueta, is based on Chicanos. He calls this, “a Chicano Mural”. This contains three farm workers working out on the fields in the United States. He also said “this mural is to represent the Mexican-Americans fighting for their political rights, so farm workers can have a better pay.” There are murals that are similar to this in Ortega Park as well. Near the swimming pool area, inside and outside of the walls, are murals which represent the roots of where Mexico began. Aztec, Toltec, and Mayan art can be found on these murals. There are paintings of Toltec and Aztec sculptures such as those you would find in Mexico, the timeline and different parts of the Aztec history, and the famously known Mayan Pyramid. There is another mural which depicts kids playing sports. The sports that are included in this mural are soccer, baseball, basketball, and skating. Right around the corner is a mural representing the kids and young adults as farmers that work in the fields of Mexico.

The reason why Manuel Unzueta, his daughter and son, his students, and other artists such as Miguel Rodriguez, Miguel Gonzales, and Amando Rascon created these murals was because they wanted to show people their Mexican background and know more about their culture. He also mentioned that “Murals are photographs of history, murals are statements of people, murals are contemporary reminders that society doesn’t change”. Manuel does not want people to forget the history of not only the art itself and how much time they took, but the history behind those murals. They send strong messages about the cultural backgrounds of many people and remind us that we are a part of history too.

The city of Santa Barbara is still set on their plan of renovating Ortega Park and taking down the murals forever. Manuel Unzueta and his community are still fighting back to keep the murals there as they have always been. Manuel still plans on the murals to be in a different spot in the park if the renovation is ever to be done. But to this day, Manuel Unzueta has not given up and plans on not giving up on what he believes is true for his collective murals for the community of Santa Barbara. Unzueta said that he would tell Santa Barbara’s government that what really matters is that they, “Let art consolidate, put the politics aside, put the administration aside, put the differences aside, but don’t let art be modeled or destroyed by opinions. Never. Let art be respected. Respect the concept of art because art gives us spirituality and Identity, and that’s universal.”

As a nephew of Manuel Unzueta, it is an honor to say I am very proud of the way he has not given up on one of his biggest accomplishments ever. He has changed the community in many ways, to where even the community is involved trying to help him out. He’s been a great example of being humble, and having great character. Putting his love for family and art first before anything else. “I don’t care about the money, the fame or the status, this is for the community to remember who they are”, says Manuel. He deserves a lot for the things he’s done from not only teaching others about his passion, but always remembering who you are, and who you do it for most importantly. It’s had an impact on me, and if I want to be great in doing something one day, I always have to remember to remain humble. Be an example for others to make a difference in not only the community, but the world. If Manuel has had a huge impact on everyone, he deserves to keep his collective murals up. To remember that the hard work you put into your passion can change lives someday.