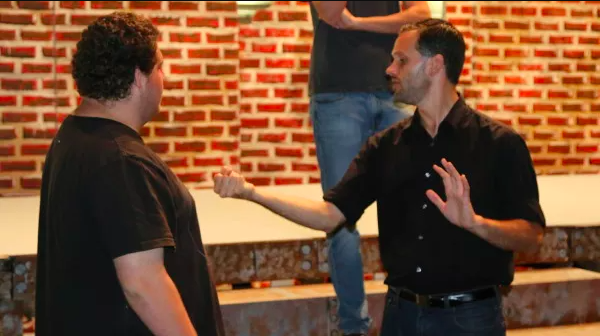 Justin Baldridge has big plans for Santa Barbara High School Theatre. As he takes the reins from Otto Layman, who retired last year after 25 years of dedicated service, he has a bold vision for the depth and breadth of the program as he builds upon that legacy. Although his most recent work has been on professional productions off-broadway, he actually got his start as a high school theatre teacher in southern California teaching at Redondo Union High School. In his experience, he has found it important to try and “bridge the gap between educational and professional theatre.” For Santa Barbara High School, this means he wants to “hold students’ hands less” as they approach productions and treat them as professional performers. He wants to create very distinct environments between the actual musical theatre productions and the newly revamped advanced theatre class which he strongly encourages students in the show to take. This is where the fundamentals of acting will be taught including the acting theory of Stanislavsky which he views as a perfect tool for young actors in its linear approach to the craft. Baldridge also plans to expand the ways in which students are involved in the shows bringing the focus back around to the full breadth of work that goes into creating a production including in the technical and creative aspects. It is important to him that he is viewed as an equal with technical director Talitha Blackwell and that the crew under her guidance are responsible for both the design and construction of sets. Furthermore, the new Theatre Arts Club run by student officers will help represent the Theatre Department to the larger community and bring together everyone in theatre with the long term goal of establishing a new Theatre Arts Academy on campus. He plans to continue the tradition of performing two musicals a year but also wants to find ways to include other types of productions including straight plays and chamber musicals and finding more opportunities for student directors and producing original works.

Baldridge, who lets students call him “Mr. B,” actually describes himself as a very shy person and he says he never auditioned for theatre in high school because he got too nervous. However, music has always been a massive part of his life as he has played piano since he was eight and played bass clarinet in marching band throughout high school. He says that that program taught him “structure and discipline” as they went on to place eighth nationally and go multiple seasons undefeated. He then went to study music at Cal State Fullerton but soon realized that he needed to follow a different path. His friend suggested he switch into the theatre department and just like that his life was radically transformed. From that point, he hasn’t slowed down. After graduating with a focus on musical theatre and directing, he taught educational theatre for ten years and got a Masters in Directing from Roosevelt University and then directed numerous off and off-off-Broadway shows including the premieres of A Dog Story, The Time Machine and Ozone Park. He hopes he can inspire students who also want to pursue careers in theatre and really teach them about the inner workings of the industry.

Although his tenure at Santa Barbara High School is beginning during uncertain times, he is finding new ways to teach and connect with students virtually while online learning continues. He is looking into different ways to do smaller virtual performances and is planning for a production in the Spring if the state of the world will allow it. Right now however his focus is on getting to know the students and laying the foundation for the next chapter of a historic and esteemed theatre company.