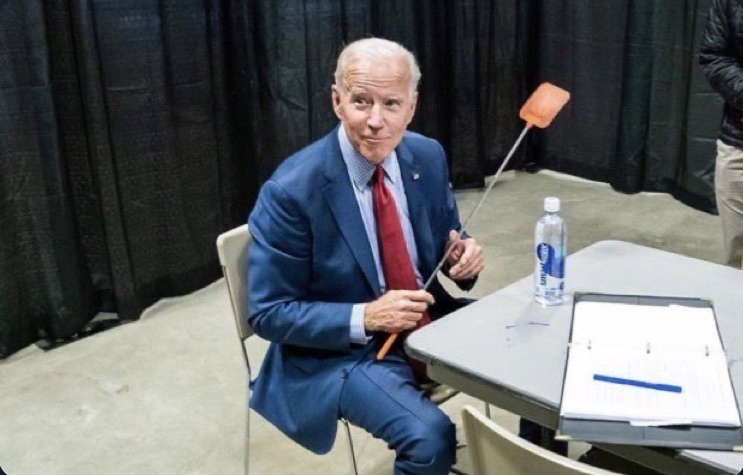 As we approach November intensity has risen. As I assume we all know, November 3rd is election day.  If you are not able to vote in this election it is important to educate yourself politically and to register/pre-register now.

The two leading candidates for this year’s presidential election are our current president Donald Trump, and his vice president Mike Pence, representing the Republican Party, who are campaigning against Joe Biden and his Vice president Kamala Harris, representing the Democratic party. While I could go on about each party and the representatives, I will be focusing on Joe Biden’s campaign strategy. Though he is a very serious presidential candidate, he also has a sense of humor. He has the typical run of the mill formal slogans and ads you see on TV, Youtube, etc, but also has made numerous jokes regarding events leading up to the election.

A very popular one is a clip of Donald Trump saying, “If I lose to him *Joe Biden* I don’t know what I am gonna do. I will never speak to you again. You’ll never see me again”. Joe Biden responded saying, “I am Joe Biden and I approve this message”. This campaign spread like wildfire across all social media platforms by Generation Z. Biden’s campaign team is very clearly attempting to appeal to the younger generations, and they are doing so successfully. Many of the younger generations want to know if there are some of their own behind these new campaign strategies.

Another example of a humor-filled campaign tactic was Joe Biden’s quick response to Donald Trump’s released tax returns that consisted of records showing he only paid seven hundred and fifty dollars in federal taxes, which is less than an average Starbucks worker would pay, it also consisted record of Trump writing off his hairstyling for thousands of dollars. As frustrating as it may seem to hear that you most likely paid more in taxes than our president, Joe Biden took this as an opportunity to not only publicize this outrage but use it as campaign merch. You can find stickers and t-shirts on his website that are available with the words,“ I paid more taxes than the president”. He even went as far as making the stickers retail for seven dollars and fifty cents for a pack of 2. It seems that his new tactics for his campaign are working, I have personally seen many individuals find it hilarious, and have even made them have more interest in voting for Biden.

In a recent debate between Vice Presidents Kamala Harris and Mike Pence, which aired live on Wednesday, October 7th, a fly had landed on Mike Pence’s head. While it may have gone unnoticed to most, the younger generation doesn’t miss a beat. They took to social media and blasted the embarrassing moment. Even Kamala Harris pointed it out to Mike Pence. Joe Biden took to this quickly and released a photo on Twitter holding a fly swatter with the words: “Pitch in $5 to help fly this campaign”, along with a photo holding said swatter.

Many Americans, primarily youth, believe both options are not preferred candidates, however, they are voting for the “lesser of two evils”. They have even made their own slogan: “ Settle for Biden”.  This slogan has been popular among youth and across social media. Our Democratic nominee, Joe Biden, caught onto this slogan and even made signs of it. All “Settle for Biden ” merch is on https://www.settleforbiden.org.

You can see that Joe Biden is trying to win the votes of the younger generation. He is not the only one, an unknown program under the name Biden Beauty is selling blue makeup sponges to “cancel out the orange”. Although it is not a part of Biden’s official campaign, it is approved by him and is doing quite well among social media users.