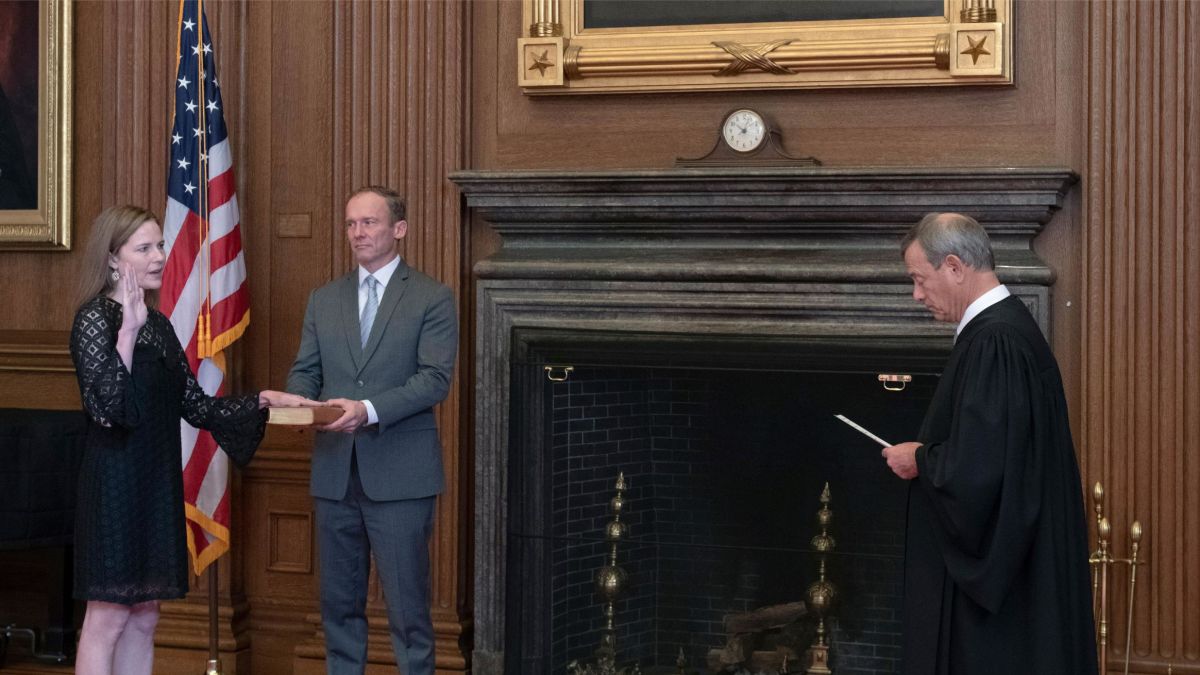 Amy Coney Barret was nominated by Donald Trump to be the ninth judge on the Supreme Court on September 26, 2020, replacing the late Ruth Bader Ginsburg. She was later sworn in on October 27, 2020. Controversy surrounds her nomination and confirmation because the court is now conservative-leaning with six judges being conservative and three being liberal. People are concerned that Amy may damage protections for gay marriage, women’s health, and affordable health care.

If you haven’t been watching the news recently you might be wondering who Amy Coney Barret is. Amy was born on January 28, 1972, in New Orleans, Louisiana. She was born to her mother Linda and her father Mike. She was the oldest of seven. She received a Catholic early education at St. Catherine of Siena elementary school. She was also affiliated with a small Catholic group called People of Praise. A former member of the group stated that women in the group are treated as subservient to men.  Barret is described as being a “handmaid” by the People of Praise group. She has gone on to become a successful professor of law at Notre Dame University and an appeals court judge. However, many people in the United States are concerned that her conservative Catholic background influences her decisions regarding the law.

Gay rights are one of the most controversial issues that are being discussed between the nine members of the Supreme Court. Amy was selected to fill the spot that Ruth Bader Ginsburg left. Ruth supported same-sex adoption and same-sex marriage. She also advocated for gay people and women in her time on the Supreme Court. This is why gay activists were so devastated when a conservative, catholic raised judge was nominated to take the place of a world-renowned hero.

Do activists fear her because of her ties to the Alliance Defending Freedom, a conservative legal group that has been at the forefront of litigation arguing for an expansive view of religious freedom? Or because when NBC News asked Rachel Laser, CEO of Americans United for Separation of Church, about Amy’s record on church-state separation, she referred to her record as deeply problematic. Laser stated, “She has shown that she would allow claims of religious freedom to be misused to harm women, LGBTQ people, religious minorities and the nonreligious, among many others”.

According to NBC, Barrett delivered a series of lectures funded by the group (Alliance Defending Freedom), which submitted legal briefs against same-sex marriage in Obergefell v. Hodges and successfully argued a Supreme Court case on behalf of Masterpiece Cakeshop owner Jack Phillips, the Colorado baker who refused to bake a cake for a same-sex wedding because he said it would violate his religious beliefs. Recently the court is going to be present at a court hearing in Fulton v. City of Philadelphia. This case will look at whether faith-based child welfare agencies can refuse to work with same-sex couples and other people whom they consider to be in violation of their religious beliefs.

Out of the nine justices on the supreme court, six of them are conservative. This affects women’s health care all over the United States. Throughout the process of Barrett being nominated to take place of the ninth member of the supreme court, she has been asked multiple questions in regards to abortion. Every time she is asked about abortion, she completely disregards the matter and moves on to the next question. This is already concerning because she is not willing to answer questions about such an important topic, but when you dig deeper into her past actions regarding abortion it just gets more concerning.

One of the reasons Donald Trump nominated Barrett was in hopes of reversing Roe vs. Wade. Roe was a court case where the supreme court ruled that the Constitution of the United States protects a pregnant woman’s liberty to choose to have an abortion without excessive government restriction. In the past, she has defended state legislatures passing all manner of abortion restrictions. According to NBC, Senator Chris Coons asked Barret about what she thought about Griswold vs. Connecticut, the 1965 case recognizing married couples’ right to use contraception and Barrett broke with tradition by refusing to affirm that Griswold was correctly decided.

Many people are concerned about whether or not Amy Coney Barret along with the other conservative justices will vote to dismantle the Affordable Healthcare Act (ACA). More than 20 million Americans gained insurance by the ACA. This is now threatened because the justices could decide that the mandate that everybody must have health insurance is unconstitutional. Currently, there is a case against the supreme court known as California vs. Texas which questions the law’s mandate that everybody has to buy insurance. As part of the highest court in the United States, many people see Amy Coney Barrett and the conservative court as a threat to people’s rights.